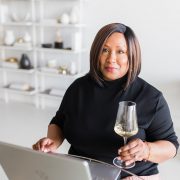 Look For The Helpers: Chef-Run Initiatives and Chef Mike Cain

The key to the future is knowledge of the past. This year of racial strife and reckoning has ushered in a newfound recognition and respect for Black-owned businesses and brands. There is a heightened awareness of Black winemakers and professionals in the wine industry, almost as if discovering unicorns. But Black people are not new to the wine industry. Pre-dating the Mayflower’s landing, the 1850’s gold rush in California, and the Old South’s grape boom, the American wine industry was built on the un-paid labor of enslaved Africans and Native Americans. Laws were passed to ensure winery owners had the “staff” needed to cultivate the vines. How does a woman born into poverty in the segregated South rise to become the first Black woman in the United States to own and operate a winery? It’s complicated.

Many Americans’ introduction to US history is the arrival of the Mayflower in 1620, but a year earlier, in 1619, twenty Africans were captured, enslaved, and brought to Virginia by a Dutch ship, which began the era of American slavery. [1]  Millions of Africans would be kidnapped throughout the 17th and 18th centuries and forced into slavery in the American colonies. Winemaking in America began in the 1500s, with widespread production gaining steam in 1628. [2] Virginia, home of the oldest of all winemaking traditions in this country, enjoyed farm-scale winemaking from native grapes like Norton, while Scuppernong flourished as the vin de pays of North Carolina. Early winemaking success was also found in Kentucky, New York, Ohio, and Missouri. American wine pioneer Sidney Weller, credited by some as opening the first commercial winery, coined the phrase “American system of viticulture” before his death in 1854. [3] These wine businesses soon grew to national prominence, but attracting young people to study winemaking proved challenging, so slave labor filled the gap. This newfound knowledge of viticulture, combined with their homelands’ advanced farming techniques, was shared from slave to slave as they settled in various states across the country after the abolishment of slavery in 1865. Every state in the US now produces wine, and America is the fourth-largest wine-producing country in the world, thanks to the sacrifice and success of these early Black viticulturists.

“Ms. Rideau’s ability to imagine a space that didn’t have prior examples is the definition of pioneering. However, what I think is even more exemplary is that she did it without the many resources we now rely on. Social Media was not a thing, and the internet did not rule everything. It’s imperative that we tell stories about Black Women like Iris Rideau to dismantle the myth that we are new to this industry when the truth is that we have always been a part of this industry, our names have just been erased from mainstream media.” – Ashtin Berry, Sommelier & Creator of Radical Xchange, a hospitality and social justice consultancy

Iris Duplantier Rideau, the first Black woman to own a winery in the United States, has spent the last three years completing her memoir. The soon-to-be-published book One Life Between Two Worlds reflects her life lived in a world of contradictions, confusion, and ultimately, success. Iris was born in New Orleans, LA, in 1936. She was raised under the harsh implementation of Jim Crow (racial segregation laws), which institutionalized white supremacy and black inferiority throughout the South. Being of mixed heritage, she was identified as Creole Black. Her light skin allowed her a life of privilege in some parts of town where she could eat and shop wherever she wanted without degradation. However, when she wasn’t with her fairer-skinned grandmother, she was treated as “colored” and made to step off the sidewalk to let white people pass. She could not look a white person in the eye, try on clothes in a store, or drink from certain water fountains. She experienced racism so demeaning it was unfit for any human being. In the 1940s, her family made the harrowing decision to flee to California in search of a better life. Now known as the “Creoles to California” caravan, this mass migration of Black and Creole families from Louisiana to California lasted from the 1930s to 1960, encompassing the Depression, World War II, and Jim Crow. [4]

Iris vowed never to experience those days of oppression again and worked tirelessly to carve out a unique piece of the American Dream under impossible circumstances. After a brief marriage as a teenager and the birth of her daughter Renee, she would graduate from night school with more will than ever to not only survive, but prosper. She married Jimmy Rideau in 1957 and would later found Rideau Insurance Agency (1967) as only a handful of Black-owned businesses at that time. She earned a major commercial contract with the City of Los Angeles from then-Mayor Tom Bradley and founded Rideau Securities Firm in 1978. Iris divorced that same year and has remained single. Along with her daughter, the light of her life, she has a grandson and two great-grandchildren. At the height of her business success in the world of finance, she had offices in downtown and West Los Angeles, employed more than 50 people, and some reports say she was worth an estimated $12 million.

Today’s Black Lives Matter movement is particularly profound for Iris. She was a civil rights activist in the ‘60s and helped Jesse Jackson lead boycotts against major corporations like Coca-Cola and Pepsi, just before Dr. King’s movement took hold. She joined the Finance Committee for the Los Angeles Urban League and created the “Urbanites”, a fundraising group of professional Black women that she led for more than a decade. As a product of segregation, she has lived with racial injustice her entire life. She notes the strides America has made since the Civil Rights Movement, but has recently become discouraged by the rise of white nationalism. “Today’s young, diverse, unrelenting protestors make me believe we may finally be able to break this horrific cycle of racism. Don’t stop, never give up the fight!” encourages Iris. She also notes the importance of young freedom fighters to remain vigilant and eschew violence. She warns we could easily find ourselves back in the 1950s [policy-wise].

It’s no surprise that the first Black woman to own an insurance agency and financial services securities firm in Los Angeles would continue breaking barriers and shattering stereotypes throughout her lifetime. Iris visited Santa Ynez Wine Country often during her many trips to Santa Barbara over the years. Iris loved the wine country lifestyle so much she built her retirement home there. In 1995 she purchased a twenty-two-acre property adjacent to her home that included a Historical Santa Barbara Landmark adobe building built in 1884. She converted it into a tasting room then built the winery building, officially opening Rideau Vineyard to the public in 1997. “My love of wine coupled with my desire to get back in business, drove me to purchase the property and create Rideau Vineyard,” states Iris. “My success in business taught me to always hire the best people in their respective fields.” She trained on the job as she hired winemakers and put all of her business acumen to new use. Her mentors were winery owners and friends in the business who shared her passion for making premium wines. “Get your education. Show up and hold your head high. Know that you have a place in this industry,” instructs Iris to aspiring BIPOC vintners and wine professionals.

“Iris Rideau served as an inspiration to me when I founded Theopolis Vineyards in 2003. At the time, I had not yet met Ms. Rideau, but her reputation as a pioneer for Black women winemakers was foremost in my mind.  Because of Ms. Rideau, I knew that if I worked hard, stayed the course and made great wine, I too could be a trailblazer.  I owe a debt of gratitude to Ms. Rideau, and I thank her every time I have the chance.” – Theodora Lee, Owner & Vintner, Theopolis Vineyards

Iris says she once “fell in love” with a 1989 Château de Beaucastel Châteauneuf-du-Pape. She’s always had an affinity for Rhône varieties, and the property she purchased was conducive to these grapes due to its location and terroir. Her flair for entertaining and food and wine pairing made the vineyard a local hotspot as she often showcased Creole cooking at tastings and special events.

The serial entrepreneur owned and operated the estate vineyard which would be heralded as the top producer of Rhône varieties on the Central Coast for the next 20 years under her supervision. At the time Iris sold the vineyard in 2016, she was 80 years old with an annual production of 9,000 cases of wine. The new owners kept the Rideau Vineyard name and its previous winemaker. Iris visits the winery at least twice a week with her dogs and she talks about this transition in her memoir.

Iris describes living a “dream come true” during the winery’s first few years in business. She smiles, recounting the trying times of waiting for that first fruit set and the challenges of planting her first Viognier block. She is still overwhelmed with joy at the memory of her 2004 Roussanne winning the best white wine award at the Los Angeles County Fair. Iris says her day is not complete without a glass of Rideau Vineyard Viognier or Château Duplantier, her signature red blend. It always features the same four grapes: Grenache, Mourvedre, Syrah, and Petite Sirah. The highly-rated wine has been in their program since its founding and has gained a cult-like following. Jeb Dunnuck awarded the 2015 vintage a 91 and Robert Parker’s The Wine Advocate rated the latest vintage (2016) 94 points.

Iris Rideau is fierce, formidable, and phenomenal. She credits the wine industry as the most satisfying chapter of her life. She is a true national treasure, not just an icon in the world of wine. Her upbringing taught her never to give up no matter how hard life gets. Her personal mantra is “the hardest the lesson, the greater the reward”. Her legacy is one that encourages everyone, especially young, Black women, to manifest their dreams against all odds, and to resist and dissent against oppression in all forms. Her wish is that she will live long enough to see all races truly come together.

“Iris Rideau is more than a wine pioneer, she is an incredible businesswoman, a visionary, and an activist. Her legacy is what many of who came through her path looked to for inspiration when times were difficult. We can because she did.” – Tahiirah Habibi, Founder, Hue Society & The Roots Fund

The Solvang Chamber of Commerce named Iris as an honorable “Woman in Wine” on March 24, 2020. She was also bestowed a Certificate of Special Congressional Recognition from US Congressmen Salud O. Carbajal during the event. On September 16, Iris celebrated her 84th birthday at Santa Ynez Kitchen, her favorite restaurant. Her best friends filled the socially-distanced gathering with love, laughs and overflowing glasses of her 2016 Sangiovese, the last vintage made under her ownership of Rideau Vineyard. Wine Enthusiast Magazine rated this wine a 91, calling it “playful, but also serious in density”. The age-worthy wine is bold and balanced, with each sip revealing another layer of flavor and a lingering finish. How apropos.

Visit www.IrisRideau.com to join the Book Club and receive advance notice and book signing alerts when One Life Between Two Worlds is published. For more information on her namesake winery, visit www.rideauvineyard.com.