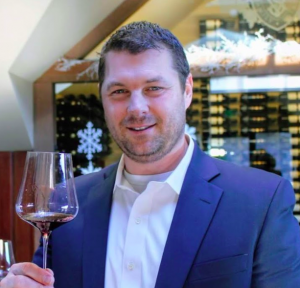 Bin 412 has been in the works for several years and finally took shape in late 2017 when it was founded by Pittsburgh, PA based wine enthusiast Eric Hiltz.

Eric caught the wine bug during his honeymoon in Northern California.  Tasting the 1997 Stag’s Leap Wine Cellars Cask 23 bottling during a late day visit, he became fascinated with what a great wine could taste like, with such power and intensity, while still being elegant and complex.

Starting with the 1997 vintage, Eric began to collect and study wines from the United States.  Over time, he became fascinated with the entire wine industry, including the great terroirs of the world, different grape varietals, and the viticultural techniques that shape the way wines taste.

He has traveled extensively to spend time in wine country and learn as much as possible during his visits.  He is also an avid reader and researcher on this topic and brings a wealth of knowledge along with a passion for sharing.

By day, Eric is an HR Technology executive. By night, through Bin 412, he is laying the foundation for a future in the wine industry, pursuing professional sommelier certification, and sharing his love and passion for all things wine through guided wine dinners, video reviews and blog posts.