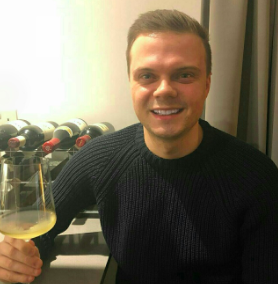 Ross Brereton is originally from the north of England but has lived in London for the past five years. His passion for wine began in summer 2017 during a wine tour on the Greek island of Santorini, famous for the fresh and mineral variety, Assyrtiko. On his return to London, Ross wanted to learn more about wine and enrolled onto the WSET Level 2 Award in Wine and Spirits at the WSET London School.

During 2018, Ross increased his knowledge of wine and the industry through reading, travelling to European wine regions, attending many tastings, and undertaking work experience at a local wine merchant. Ross has recently completed the WSET Level 3 Award in Wine and plans to enrol onto the new Level 4 Diploma in September 2019.

Ross eventually plans to transition from his current career as an urban planner to the wine industry, equipped with his transferrable skills, passion and new-found wine knowledge. His ultimate goal is to work towards becoming a Master of Wine.

When not immersed in wine, Ross enjoys running, travel, cooking and following English League 2 side Crewe Alexandra (when they’re not losing)!