Bodegas Bhilar: Biodynamic Winery in the Heart of Rioja

I love going to tasting events.  Not because there is an endless supply of amazing wines to sample.  I love them because there is always the potential to find an absolute gem.  Something that excites you. Something that you still taste weeks after the event.  It doesn’t happen too often but it happened recently at the Decanter ‘Spain and Portugal Fine Wines’ event when I luckily stumbled upon Bodegas Bhilar from the Rioja region.

I have to admit, I can’t remember the last time I bought a bottle of Rioja.  It’s not that I don’t love the wines and the region, after all Rioja is a brand as well as a classification of origin, full of historic wineries producing some of the purest forms of Spanish wine.  There’s just been such a drastic rise in the quality of Spanish wine outside of Rioja that I’ve been irresponsibly neglecting it. Bodegas Bhilar have firmly redirected my attention to the region.

Run by husband and wife team David Sampedro and Melanie Hickman; David the mastermind behind the vineyard and Melanie running everything related to communications.  Their goal is to ‘make terroir driven wines with soul, and to share them with good people’. 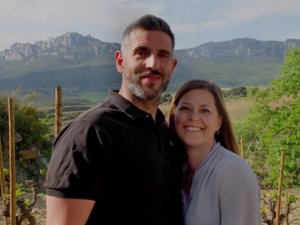 Their boutique winery is based in the tiny village of Elvillar in Rioja Alavesa in a location renowned for having some of the oldest vines in Rioja.  These vines are dotted around the rolling valleys of the region with the Sierra Cantabrian Mountains offering a stunning back drop with picture postcard vistas from every angle. 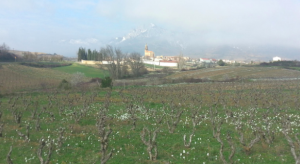 Established in 1999 with only a single hectare Bodegas Bhilar has now grown to 9.5 hectares of land.  Their first bottles were produced in 2003 with one red and one white offering but now produce seven different bottles, with three more coming soon. For grape selection there is a clear emphasis on quality and not quantity with a yield range of around 3,000kg per hectare, well below the Rioja appellation maximum allowable yield of 6,500kg per hectare.

The wines are produced under three concepts with each one containing their own unique philosophy driven by the plots where the grapes were produced; Village, Village Estate and Single Vineyard.  It is obvious David has put a tremendous amount of thought into the methods of producing wines in the different plots in order to produce the truest reflection of the land. Using their own farmed grapes and sourcing grapes from only one other viticultor in Elvillar who works closely with David to adopt a sustainable approach.  The focus is on as little intervention as possible in both the vineyard and the winery with the only treatment applied to the vines being sulphur and milk whey. Getting to know every hectare seems to have been a priority in order to understand how to get the best out of the land. 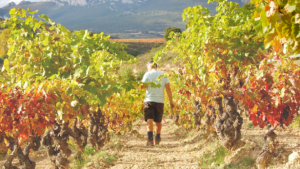 David had spent years consulting in various wineries around Rioja and producing his own wines before deciding to focus all of his energy on his own project with Bodegas Bhilar.  This decision stems from a long history of wine-making in the Rioja region, many of which were spent in the largest wineries of Rioja. It was here the David realised that the very best wines are made in the vineyard.  This allowed him to develop his own philosophy of wine production to create ‘unique wines that reflect a sense of place, sustainable agriculture, and minimal intervention in the winery’. Having grown-up in the very vineyards he works today, it’s safe to say David is the best person to carry out his philosophy on this land.  This model has also been enhanced by the completion of their new minimal intervention winery in 2016 and becoming the first winery in Rioja to obtain Demeter Certification. This biodynamic approach intertwines man, earth, vines and the cosmos.

In 2014 the decision was also made to eliminate the use of tractors in the vineyard and convert back to the use of horses for farming.  In doing so, he adopted the practices of his grandfather who had no formal training as a winemaker but who ran the vineyards through pure knowledge and feeling of the land.  David explains “horses have helped us better understand our vines, as you walk each and every line in the vineyard. You are able to see the health of the vines, the soils, the ecosystem, whereas riding inside a tractor, you can’t even see the grapes and often don’t even have to set foot in the vineyard. The use of horses forces us to be more thoughtful”.  This is David’s nod to the wine making techniques of the past and it is certainly a humbling sight. 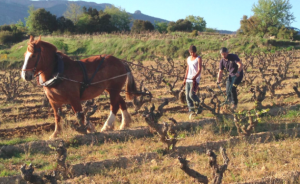 It seems these decisions have paid off in full.  The wines are rustic and perfectly mirror the characteristics of the terroir.  In order to fully appreciate the variety at Bodegas Bhilar it’s important to assess the offerings under each of the three classifications and I’ve been lucky enough to sample a bottle from each;

Blend of 85% Tempranillo, 10% Garnacha and 5% Viura sourced from their partner viticulctor in Evillar.  Fermented in concrete tanks and aged in oak for 18 months. A solid crianza wine with lots of ripe fruit and an almost jammy overtone.  Such a fresh wine with fresh acidity and a decent finish.

Blend of 70% Tempranillo, 15% Graciano, 10% Garnacha and 5% Viura sourced from a variety of their bio-dynamic Estate vineyards.  Hand harvested and a mixture of cluster fermentation and destemming before the wine is aged for 36 months in French oak. Lovely mix of blue and red fruit and lots of minerality reflecting the land it was cultivated on.  Ripe cherry, blueberries and balsamic, it’s rich and smooth and dangerously easy to drink.

Blend of 90% Tempranillo and 10% Viura sourced from their oldest vineyard planted in 1910 now fully biodynamic.  Grapes are destemmed by hand, foot pressed and fermented naturally with indigenous yeasts. The resulting wine is intense.  Less than 1,000 bottles produced and a perfect expression of ‘new school’ Rioja. Intense fruit, sweet liquorice and exotic spice combined with solid tannins that open beautifully once given some air.  The oak is less pronounced than traditional Rioja but when the fruit is this good it creates so much natural complexity that any additional oak flavours would have been completely lost. Easy to see why this scores in the mid-nineties with most critics.

In 2012 David was listed as one of ‘Six Producers Leading the Way” in Rioja by Wine Spectator, on the evidence of these wines it is easy to see why!

Keep any eye out over the next few months regarding their new release ‘Phinca Hapa Blanco’.  I had the pleasure of meting David and tasting this wine before release. It’s a blend of 82% Viura, 12% Garnacha and 6% Malvasia, fermented with skin contact for two months; the resulting wine is sublime with a gorgeous mandarin colour, subtle tannins and flavours of crisp white stone fruits.