Quick, when I say “Finger Lakes Wine,” what do you think of? I can guarantee 9 out of 10 of you (if not 10 out of 10) likely jumped to Riesling, right? The grape is nearly synonymous with the Finger Lakes. Because of that, one of the most notable quotes from Phil Arras, winemaker at Nine-Four Wines, when we spoke about Nine-Four recently was: “I don’t like Riesling as a grape. I’m THAT Finger Lakes winemaker that doesn’t like Riesling.” It was then that I knew we’d be having an interesting conversation.

Let me jump back though a bit and give you a bit of history about Nine-Four Wines. Nine-Four was just a thought only a few years ago. Close friends came to form the fierce trio that is now Nine-Four. Phil Arras is the winemaker. Some of you may know him as the winemaker at Damiani Wine Cellars on Seneca Lake in the Finger Lakes. He is still there also, but wanted to delve into some additional experimentation with Nine-Four. Melissa Thompson is the general manager and oversees the important business side of things. She has extensive experience in the hospitality industry, including her current job as the general manager at Stonecat Café in Hector, NY. Stonecat Café boasts inspired local food, with an even better beverage menu to boot: New York state beer, local cider, local spirits, and a wine list after my own heart – an ALL Finger Lakes wine menu. This is where the last of the fearsome trio comes in: Josh Carlsen. Josh is the beverage director at Stonecat Café, and the assistant winemaker and sales director at Nine-Four. He is also a sommelier.

With their unique skills and three different defined roles, and after a few dinners with a couple of extra bottles of wine, Nine-Four became a new idea, but also a separate brand – completely independent of both Damiani and Stonecat Café. Nine-Four officially came to be only weeks ago, this February, but their current releases, all 2016 vintages, are ready to go! Most (but not all) white and rosé wines in the Finger Lakes are released the following year. For example, a 2015 vintage is usually released in 2016. However, Nine-Four is releasing all of their products now, in 2018, but they are all 2016 vintages. Why does this matter though? Increased time in the bottle only helps the development of the wine; so you’re getting a better product, in my opinion, as it has had increased maturation time. Let’s jump into the Riesling though!

The 2016 Riesling “Rhysling” is a flagship wine, in a way. However, it has been for sale since the 2014 vintage. It is named after Phil’s son, Rhys. Ten days after he was born, Rhys underwent an extensive open-heart surgery to repair his aorta and several holes in his heart. Thanks to the efforts of a truly outstanding team of doctors, surgeons, and nurses at Boston Children’s Hospital, Rhys’ heart was repaired! The story of crafting this special wine parallels Rhys’ struggle to come into this world. The Riesling vineyard was struck by hail in late July 2014, badly bruising and damaging more than half of the fruit. The team was determined to try their best to save the grapes and the vintage.  After fermentation with native yeasts, they discovered that not only did the fruit survive a seemingly catastrophic event, but the juice thrived and developed into a truly different and unique wine.  In the words of his family, “Rhys and this Riesling were both born seemingly ‘broken,’ but with hard work, dedication, and love, they both were given the opportunity to grow into something very special!” Additionally of note, 20% ($5) of each bottle is donated to Pediatric Cardiology!

The name of the wine, “Rhysling,” was carried on and continued as the crown jewel of Nine-Four. For 2016 though, Phil and Nine-Four wanted to let the fruit speak for itself. “I didn’t want to make a Riesling I wasn’t interested in,” said Phil. Josh Carlsen described it well too, “This is intellectually a different Riesling. An engaging style of Riesling. We wanted to restrain fruit and also get out of its way, we wanted to bring more minerality, screaming high acid, and more time in the barrel.”

Melissa might have put it best though, considering the development of Riesling in the Finger Lakes: “As the Finger Lakes comes of age, we’re starting to get away from only imitating other great styles from around the world, and really continuing to explore what this region has to offer, what Riesling or Chardonnay does here in this soil and this climate when you get out of it’s way.  That’s what we’re curious about. To us, that’s exciting winemaking!”

As some of you may or may not know, depending on where you’re reading this from, and if you’ve visited the Finger Lakes, there are approximately 150 or so wineries/producers in the Finger Lakes region. Every year there are more and more. As the region has grown with demand and with tourism, it’s important to differentiate a new brand and how it is separate or unique from the hundreds of others. With Nine-Four, in the future, there are plans for a small, intimate tasting room. A tailored, instructive, and intellectual experience. For those of you that have visited Forge Cellars, Kemmeter Wines, Hermann J Wiemer, and now Standing Stone Vineyards, recently, they each have a unique style with personalized approaches to wine tasting. Whether it’s an appointment by reservation only, a small table for you and your guests only, or a seated personal individualized experience. This requires intimate knowledge coupled with outstanding hospitality; but it also requires unique, terroir-driven wine, from artists who care about their craft – which is what you get with Nine-Four Wines.

For all intents and purposes, this is a family winery. Phil, Melissa, and Josh are the closest of friends and Nine-Four should only be viewed as a family endeavor and operation. There is extensive experimentation, but as Josh put it, “this is experimentation grounded in science.” There is a specific niche; a set, unique area for this wine, this winery, and what Nine-Four Wines will become in the coming years.

But how does Nine-Four standout from a sea of wineries and producers in the Finger Lakes? “I want people to enjoy what’s in their glass, that’s as simple as it gets. Do I want to come back for more? Maybe another glass? Another bottle? I want people to be interested in the experiment. I want people to be jazzed about that quirkiness,” said Melissa, in response to what she wants people to think about Nine-Four.

Josh followed up a bit more too: “Balance is a hallmark of great wine. I think of wine as food; because wine IS food. It’s a component to a meal. But for our label (Nine-Four), balance is key to everything we do.”

Continue reading below to hear more about the three wines available.

From our heart to yours…

Very clean, ripe, hand harvested fruit arrived at the winery for a hand sort before going to press.  Gentle pressing of the whole clusters yielded very pretty, aromatic juice.  After cold settling, the juice was racked off to fermentation tanks, and 2 barrels of 4th use French oak for fermentation.  Native yeasts proceeded to slowly ferment at cool temperatures for 5 months with monthly stirring of the lees. A portion of all proceeds from this wine are proudly donated to support organizations dedicated to pediatric cardiology.

My take: This is one of the top Rieslings from the Finger Lakes in the 2016 vintage, and probably in recent years. Even though Riesling is king here in the Finger Lakes, it takes delicate and precise artistry to tease out a unique and different Riesling. This is that Riesling. There’s great tart fruit, citrus, and a tinge of lime oil, but the time in the barrel (25%) lends an entirely different body, palate, and finish. Blind, this would not be a Finger Lakes Riesling as people have come to know them. However, for those of you that have had a Riesling Classique from Forge Cellars, this is quite similar – which is a high compliment, in my book. Both have notable time in the barrel, and both have remarkable acidity. Both have a slightly creamy body. This is undoubtedly one to seek out.

Sourced from the east side of Seneca Lake and showing significant ripeness and flavor development through the dry September of 2016, we were afforded the opportunity to harvest these grapes based solely on their quality and character.  September 26th proved to be the day.  Hand harvested and further hand sorted in the winery, half of the fruit was sent to press as whole cluster, while the balance was de stemmed and gently crushed.  Fermentation took place with native yeasts in stainless steel tanks (30%), third use French oak puncheons, and third use French oak barrique (70%), with lees stirring every other week through this wines 8 month maturation.

My take: This is a very clean, structured, well-balanced Chardonnay. Often times with wine
drinkers, there is a group of people who used to be “anti-Chardonnay,” because they automatically
think of that old-school west-coast super-oaked butter-city Chardonnay. With increased ripeness
and fruit, and with a mix of oak and steel, this is what I like to call a “new-school” Chardonnay.
There are many unoaked Chardonnay’s with limited body and shorter finishes – which pairs well
with some food, but there are others, like this one, with a well-done mix of oak and steel that do
well as both a sipper, and a good food pairing wine. This is a good keeper in that new school
Chardonnay arena, and should be a nice summer staple.

Red Currant – Pomegranate – Candied Cherry – Strawberry – Grapefruit Pith – Gently Sparkling Sourced from the Davis Vineyard from pre-1965 plantings, the fruit came into the winery very clean and required little sorting.  Crushed and immediately sent to press, the juice emerged an inky purple despite having no time on the skins.  Fermented to dryness by native yeasts in stainless steel.  Produced in the Traditional Method, the vin clair was then bottled with liquer de tirage and laid to rest until February of 2018 when it was hand disgorged and given a gentle 5g/l dosage. This unique rosé of Rougeon is the perfect summer sipper.

My take: This is a unique Rosé with a special place in the market as well. In the Finger Lakes, most Rosé is not sparkling. Additionally, most are from Cabernet Franc, Pinot Noir, one from Sangiovese, occasionally Merlot, and sometimes some red blends. This was my first time having Rougeon as either a Rosé or a single varietal Rougeon. A nice touch, this is traditional method (method champenoise), aka “Champagne,” but comes out of the bottle as more of a fizzy, almost Pet Nat (Pétillant Naturel) like feel on the body. The color is deceiving! It’s a dark Rosé. This is a nice lakeside, beachside, porch summer popper. Who doesn’t like bubbles and Rosé?! 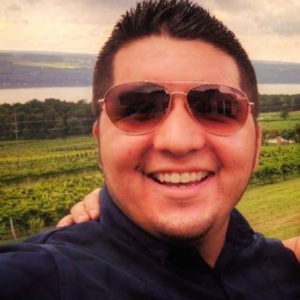