Viader: The Mother of Invention in Napa Valley

It was 2001 and Delia Viader’s 1997 vintage of  VIADER, the winery’s flagship red blend would be singled out as California’s sole wine to make it in to the top 10 of the top 100 list.

Diminutive and slight, its difficult to imagine Delia Viader taking on Napa Valley with her namesake, Viader Vineyards, in the early 80’s. But take it on she did. Dominated by testosterone & tradition, Napa Valley was a man’s realm. There were few women (if any) starting up a winery and doing their own farming and winemaking. Particularly young female upstart Vintners. But this well educated (Ph.D.), single mother of four, had a mission. That mission was to provide a legacy for her children. She came armed with multiple degrees and a passion for success. She was comfortable with the challenge no matter how difficult. 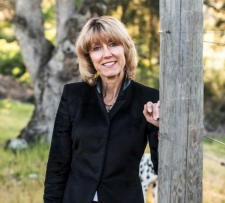 “Wine is a work of art when you are able to shine a light on its best parts. The sun-drenched days, the foggy days, they’re all in the bottle. You can feel the sun, the dry volcanic rock, in the wine. It’s this part of the creative work that fascinates me.” – Delia Viader

She looked at the business of wine in the early 80’s. It was not going to be a glamorous gig. All wine growing is farming. Hard farming. Automation was still an idea for daydreamers. Everything required a hands-on approach. She asked her father if he could help support her with an investment. The response was one she dreaded. He looked at her and said, “After all the money I poured into your education? All you want to be is a farmer?”  Delia had three degrees and a doctorate.  Her tone was one of conviction. This was not something she did on whimsy. She had carefully researched the opportunity and what it would take to get the project off the ground. Well aware of the calculated risks and the potential she pushed hard. Dedication and optimism would carry her far, but she also had the brains. She told him she would prove the value of the investment to him. She took her ideas and developed a proposal. In the end, she knew she would get his support. But he wouldn’t simply gift the money to her. This would be a business transaction. She returned the investment and made good on her word.  It would still take her 20 years to convince him the wine business was a good career choice but prove it she did.

“When you jump into winemaking, wine growing you become so passionately engaged in what you are doing. The creative part speaks to the nurturing part of a woman. It has never let me go. ” – Delia Viader

Finding the right property did not take long the challenges would be in the terrain. The steep hills of the 90 acres on Viader Vineyards is a challenge for anyone set on farming. It’s hilly, with a 30%+ incline. Rocky, but that’s a gift. Vines love rocks. It presented a challenge to plant and harvest. When Delia purchased the land, dynamite had to be used to excavate and prepare the land. That was the tip of the iceberg. Next, it had to be cleared and prepped for planting. She got to know every inch her 98 acres and with that a visual understanding of how the vineyards should be established. 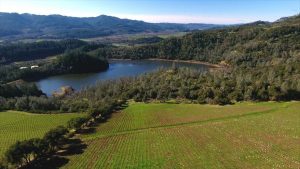 The view of Viader Vineyards from the Tasting Room.

Her convictions were not always welcome.  To take advantage of the long hours of sunlight, she chose vertical planting. This plan would muster opposition from those who had worked the vineyards for years in Napa Valley.  She decided to “Follow the path of the sun.” in her son, Alan Viader’s words. The entire valley was planting horizontally or terracing on hillsides. She would go vertical.  Bucking convention. This was her property, her dream, her vision.  They warned her of loss of soil due to erosion. She had done her homework, knew of the risks and made the decision she recognized as best for her vineyards. Delia stuck with her vision. In the long run, it paid off. “We never incurred erosion”, said Alan Viader.

“In many ways I chose wine. But wine also chose me.” Delia Viader

One can’t embark on an adventure of this size without getting some guidance or sage advice along the way. In the realm of winemaking, Delia Viader is a bantam fighter in size. A Goliath in fortitude. Moving barrels and doing heavy lifting was a huge feat. She relied to some degree on the workers she had access to, but most would fall on her shoulders.

The invitation to taste at Robert Mondavi’s Winery was a turning point for her. It was a mecca for those who needed advice or guidance on challenges. Delia went to the event with enthusiasm. It was a place to taste wines, share ideas, discuss and debate. She became friends with interns and the winemakers who attended. The relationship she would cherish the most was the friendship with Bob (Robert Mondavi). Known as an innovator and a source of inspiration for so many in the Valley since he started Robert Mondavi Winery in 1966. 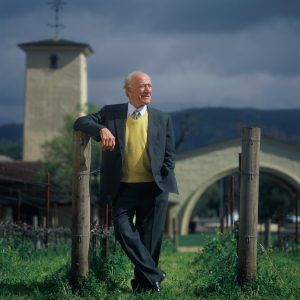 Robert Mondavi at the Mondavi To Kalon Estate

“He was an amazing force. I was there the day he received a contraption that would save hours and hours of time racking barrels”, Delia Viader mused. She was facing a weekend of racking with one helper because that was all she could afford. She asked him if she could use it. Robert Mondavi (Bob, as he preferred to be called) asked his team if they needed it for the weekend. The answer was no. He told her to take it for the weekend. This part of giving was so much of Mondavi’s legacy.  “So many people related to Bob as this generous spirit. Viader said smiling, “We used to call it the ‘University of Napa Valley’ because he was so open to sharing information with any student or crazy person that wanted to know about it.”

I asked Delia about her success and when she first realized she was going to be successful. “I had been receiving great reviews, but somehow this was different. It was the 1997 Vintage. One of those years you would call it a big gift from God. When the wine was first being considered for Wine Spectators Top 100 list. That’s when it hit me. I’m there, almost there.” It was 2001 and her 1997 vintage of …. would be single out at California’s sole wine to make it into the top 10 of the top 100 list. 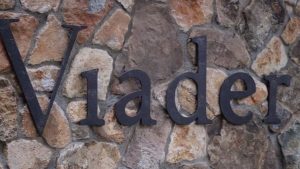 She put 40% of Cabernet Franc in her Cabernet Sauvignon and received immediate pushback from other winemakers in the Valley. Shocked, they asked her why she was putting that “bastard grape” in the Cabernet. She saw it completely different. Her love for Cabernet Franc came from its beautiful elegance, the aromatic fragrance, and its exquisite feminine touch. The tiny berries produced from the Cabernet Franc would be a challenge to grow and harvest. They’re fickle in their own right. The different dimensions it provided her blends was worth it. “It’s artistic. You cannot be bound by norms. What I do in the cellar is take the nicest, brightest, juiciest parts and put them in the bottle.” she explained. 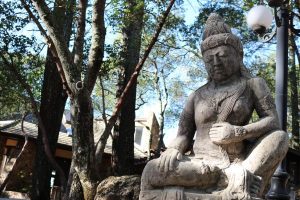 A feeling of Zen is in the air at Viader Vineyards

What she celebrates the most about her life on the vineyard?

The ability to have her family with her… she’s built a dynasty of sorts. Her family is always supporting her. The rewards are tremendous because she sees this as a way of creating something 100% on her own. She also recognizes that this life is not for everyone including her children. To have her children decide to go into the business gave her validation that what she’s built has merit. They see that value as well.

Advice on living your best life.

“Never give up on your dream. Never be fearful, If you want it, go for it. It’s your life. No one can tell you hot to live your life. Don’t listen to the criticisms and silly double talk.” Delia Viader 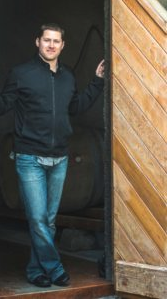 Winemaker and son, Alan Viader remembers when they came to look at the future home of Viader Vineyards back in the 1980’s.  They were traveling along a dirt road which was bottoming out here and there. His mother, Delia, turns to him and says, ” This is going to be a vineyard. I am going to make wine and this is going to be our legacy.”  Alan recalls tasting grapes when he was eight years old in their vineyards.  At 18 he was picking grape samples and tasting the nuances of the grapes.  He learned to discern the different nuances from one lot to another.

Alan started managing the vineyards in 2002. He’s studied viticulture in Bordeaux France and traveled the globe to important wine regions to learn new techniques and processes of winemaking and sustainable, organic and biodynamic processes. His intimate knowledge of the vineyards has been instrumental in today’s winemaking process at Viader. Now he’s engaged full time in winemaking. His favorite part is creating wine. He’s an artisan as well, but his true art is in the winemaking. 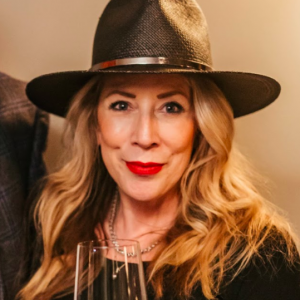 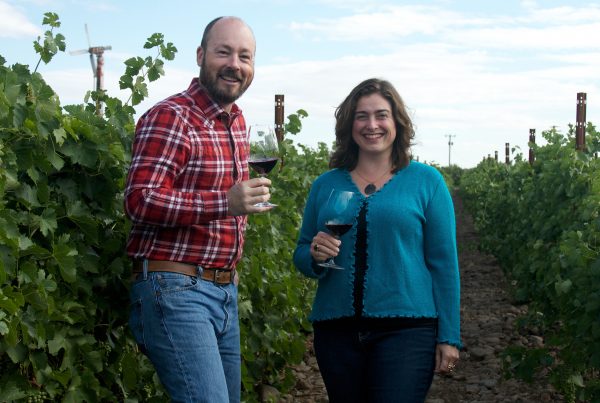 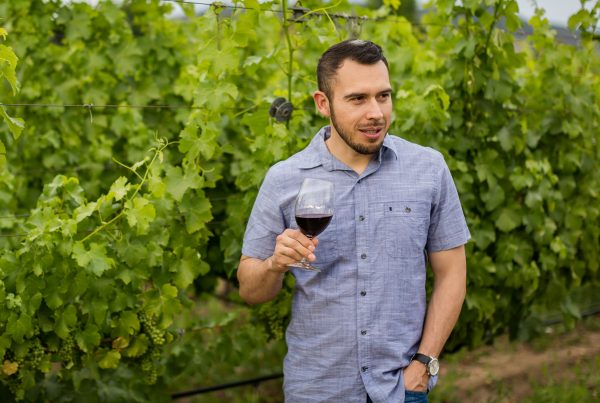 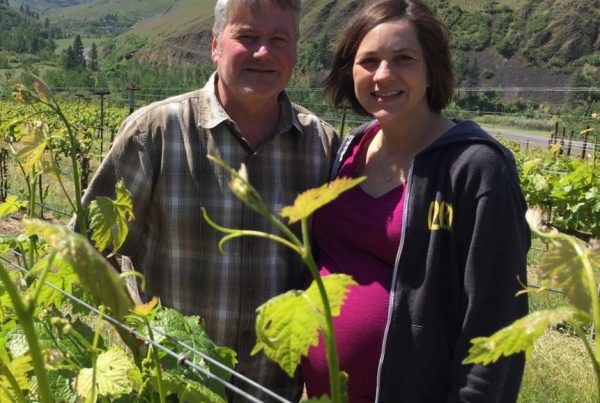