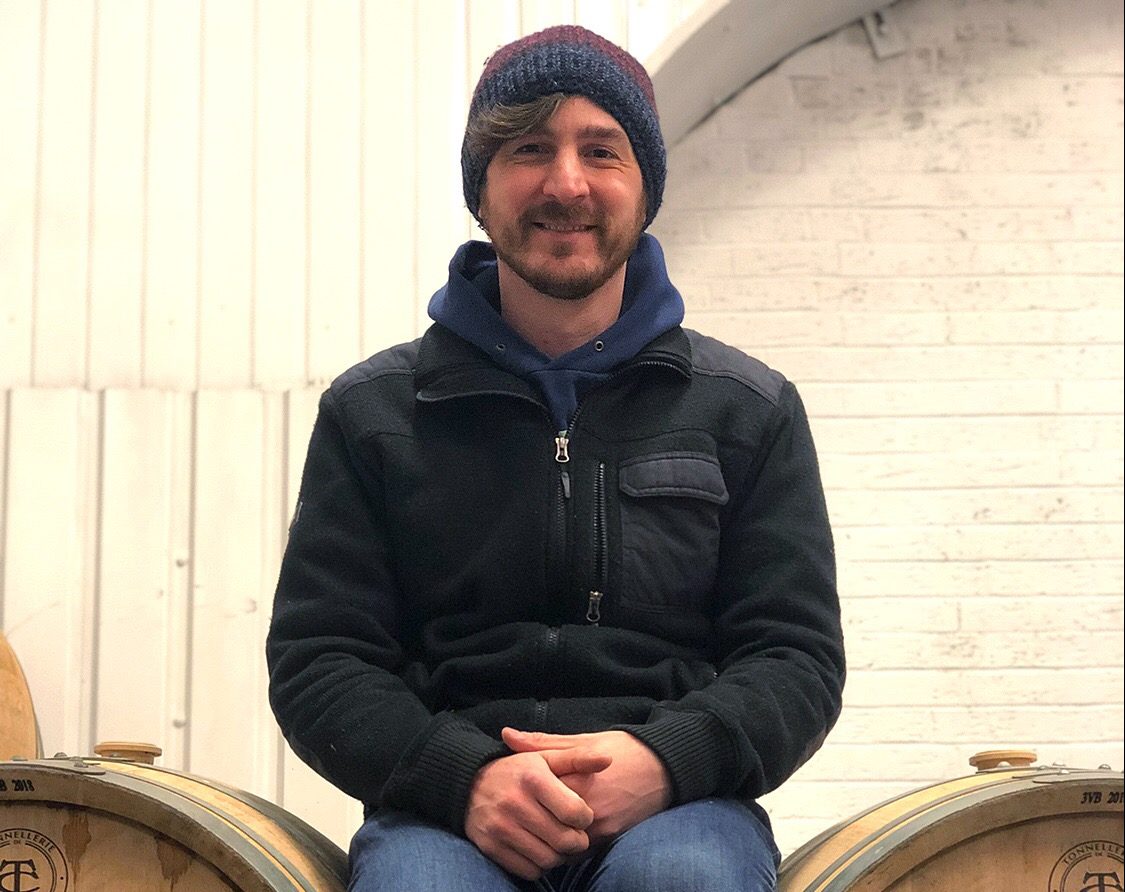 “Why would someone want to trust me with their child? What makes you think that’s actually a good idea? I’m a big kid myself!” Says Sergio Verrillo, winemaker at Blackbook Winery in London.

On a freezing morning in January, Sergio and I sit perched on two up-ended wine barrels in his urban winery in Battersea, chatting about the birth of his first child in 2015 and completing that year’s harvest at Ata Rangi (in New Zealand) shortly thereafter.

“Actually,” the Connecticut native says, backtracking, “I’m pretty grown up at work, ironically enough; I’m a big kid everywhere else.” And it is perhaps this unique combination of ‘big kid’ playfulness and adult work ethic (read: graft) that has helped Sergio to create one of the first urban wineries in the UK.

“[Previously] I was working in the wine trade as a sommelier, and then after a year of doing that I went into production simply because I just loved the idea of being creative with science, and being super geeky about it. And wine is one of those things where you…have the ability to be really creative and give your impression on the style of wine that you like, and your personality stamp effectively…[So] from 2010 I went back to school for my undergrad in oenology and viticulture. And [in] 2011 I was like there are no urban wineries here – I’m American, that’s what shit’s built on! Pioneering! Capitalism! Yeah!”

However, it wasn’t until Sergio had completed several harvests around the world that he felt prepared to embark on his urban project. Even then, there were significant roadblocks to executing his dream — not the least of which were finances and the impending arrival of his first-born. Originally searching for a small space at an existing winery back in the UK (his wife, Lynsey’s, native country), Sergio quickly realised that no one was prepared to offer them an easy way into the business.

“We wanted to have our own project, albeit we were kind of expediting that process [by going it alone]. And if no one was gonna [sic] help us out on that journey then we were gonna do it for ourselves. It was a whole lot of grit and tenacity.”

So Sergio and Lynsey set out to look for the perfect space, which they knew had to be central and in a 19th-century railway arch.

“The railway arches are really great for a number of different reasons. One, most of them are on a business estate, so it’s a matter of accessibility. If we were on a major footfall — let’s take Vagabond [Urban Winery], down the road — logistically, it’s a lot more difficult. They’re in a much smaller space, bit more confined. What do you do with your waste? What do you do with the bins afterwards? Whereas for us, we have space outside, we have over 1,250 square feet in here, we have 10 metre high ceilings in here, so there’s room for growth, storage, in the short term anyway…And also we are within [transit] Zone 2 and we are ten minutes away from Chelsea. Victorian brick, which is when this was made…is a really great insulator. So having neighbours on either side, being effectively terraced property, allows us to benefit from the heat generated on either side as well as humidity retention, which gives us limited loss from our barrels. ”

So with Victorian brick on the brain, Sergio and Lynsey secured Arch 41 on the London Stone Business Estate in Battersea.

For those familiar with London’s craft brewing and distilling scene (for example, the Bermondsey Beer Mile), it will come as no surprise that Blackbook has benefitted not only from the physical space and handy Victorian brickwork in their arch, but also from the thriving local business community.

“The community in here is really great. I didn’t really know that at the time, but come to find out they’re fantastic. We have a distiller across the street who started six months before we did, so we’ve kind of gone on the same journey and really embraced each other and get along really well. There’s a meat supplier next door that does Wagyu beef and super sexy food. And then there’s two organic juicers on either side…The juice guys will pop over if I’m here like one, two AM with a jug of orange juice like, ‘you’re fucked, so have some of this.’”

All of this interaction raises loftier questions (best reserved for another forum) about the importance of these arches for the economic regeneration and mobility that they provide in an otherwise highly developed, stratified city.

Returning to Blackbook’s approach to winemaking, Sergio stresses the importance of sourcing quality fruit and developing strong relationships with growers, despite the challenging market for sourcing quality wine grapes in the UK.

“It’s really difficult to work with organic fruit here, there’s a lot of people converting over, but a majority of grape growers, their commercial model is based after systematically spraying and commercially managing their vineyards. So I look for people who do a minimal approach to that — maybe using less sprays or using alternative sprays, stuff like that, to be aware of what they’re doing ecologically, but also sustainably…[Ultimately] they’re commercial farmers. They’re not grape growers, albeit they take pride in what they do and they grow good fruit, but they’re commercial farmers, they do wheats and cereals.”

Focusing on sourcing fruit from Essex and southern-east Anglia, Sergio hopes to slowly influence the viticultural practices of his partners by walking the sites himself and developing strong personal relationships with growers. Yet no amount of positive working relationship can influence the climate, which can sometimes still be quite volatile in England. In 2017, for example, late spring frosts damaged 30-90% of all grape crops in the south of England.

Sergio compares the development of the UK wine industry (particularly for still wines) to Oregon in the mid-1990s. With 50% year-on-year growth, and around 150 wineries now in operation with around 2,800 hectares of vines planted, this boom is well in evidence numerically. However, Sergio points out that still only 30% of production is based around still wines, with the rest of production being focussed on producing well-known English sparkling.

Yet as the climate in the UK becomes more moderate, this trend has slowly started to change. Sergio cites the nascent natural wine movement, spearheaded by the likes of Ben Wallgate of Tillingham Wines, and the pushback of young winemakers like himself against the dated attitude of governing bodies of the trade, as evidence of the growth of the still wine movement in the UK.

Sergio’s inner big-kid is in full evidence as a rebellious teenager when we discuss the move, for example, towards having AOC-style structures in the UK: “I am in favour of having AOC-type structures, only if it’s going to have an impact on the quality. I’m all about raising the quality profile. If it’s simply an ego boost to give people the idea that they are in this little club? Fuck it.”

Ultimately, Sergio will stubbornly keep pushing forward what he wants to achieve: high-quality, single-varietal, single-vineyard wines. Dry, still wines, whose complexity is derived from high acid and textural structure, with a focus on Chardonnay and Pinot Noir.

This style of wine is achieved primarily through intense scrutiny of picking dates, but also through Sergio’s meticulous choice of oak fermentation and maturation, something he attributes to his time spent working in Burgundy.

“We’re not [trying to be] natural wine makers. A lot of what we do here is just paying attention to meticulous detail… We do things a bit differently because 85% of our wine is barrel-fermented and barrel-aged. We don’t really fine or filter, which is a bit unusual for the UK (not worldwide), and I think [because of] my stint in Burgundy I‘ve really embraced that reduction, that flintiness, both in red and white. Looking around, I like large-format barrels, that is a real key to what we try to achieve. That gives you the new oak nuances without overpowering the wine itself. You really have to be careful with respect to the fruit profile, you don’t want to drown out the profile of the variety, you want to accentuate it… This is what separates us from other people: understanding why this barrel works well with this wine.”

To put Sergio’s claims to the test, a few days after our interview I picked up a bottle of his 2017 ‘Painter of Light’ Chardonnay and sat down for a lengthy tasting with a side of Daniel Craigà la James Bond.

At first nose, the wine has a hint of a warm toast aroma, which clashes wonderfully and unexpectedly with the incredibly high, zinging acid structure on the palate. Notes of Meyer lemon, green apple, peach, and toast follow, to create a truly mouth-watering wine. Admittedly, I kept returning to the bottle for more, and was a little bit shocked to find that by the end of Casino Royale, I had finished the entire thing. It’s no wonder that wine writer and MW Tim Atkin has repeatedly lauded this vino as one of his favourite-ever Chardonnays.

With last year’s vintage being only his second under the Blackbook label, it will be interesting to see how Sergio’s winemaking style and business evolve, something that he self-admittedly believes takes at least ten years of partnership with growers and personal refinement in the winery. Ideally, he would like for Blackbook to reach the 40-50 tonne capacity in its current space, and he is exploring planting options as well, with a view to becoming the first fully integrated (vine-to-bottle) urban winery in the UK. On the consumer front, Sergio hopes to install a mezzanine level tasting bar in Arch 41, or a similar satellite shop somewhere even more central. But, Sergio stresses, all of these plans are dependent on first building a solid following and demand for his wines.

Central to creating this demand will be Sergio’s journey of continual evolution, with his unique, youthful slant: “We learn and we strive to change and figure shit out, and if we’re not doing that, we should just close the doors. I ran away to be a mad scientist and be experimental and fun. If I’m not doing that, then why [bother]?”