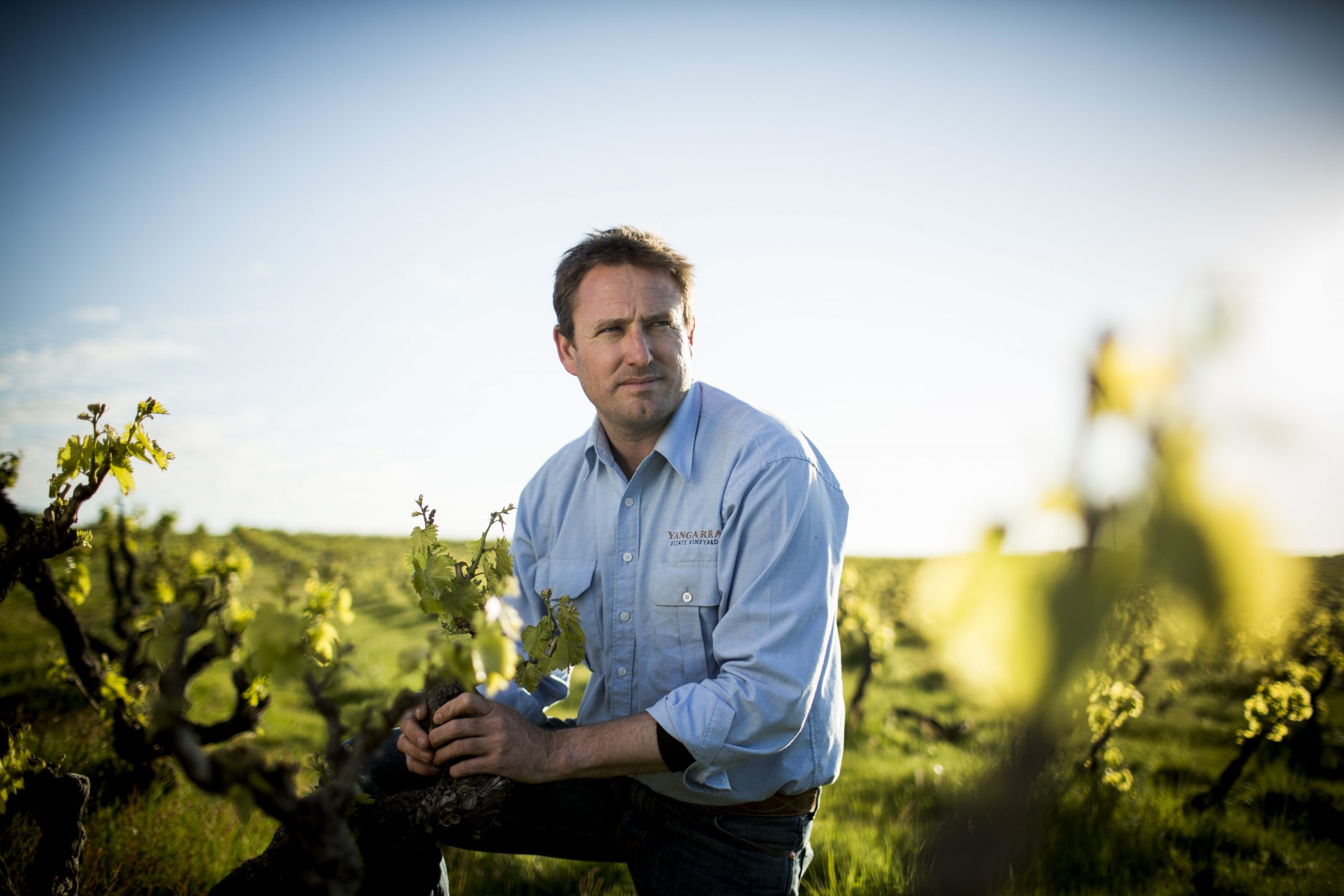 For nearly twenty years, Peter Fraser has been the driving force behind the biodynamic wine farm, Yangarra Estate. During that time, he has received a lengthy list of accolades from many of the wine industry’s top critics and publications including James Halliday’s Australian Winemaker of the Year award in 2016. He’s a visionary who leverages old-school winemaking practices to produce exceptional Rhône varietal wines in the McLaren Vale.

One of the things that sets Peter apart from his contemporaries was his vision for Grenache. In the early days of Yangarra wines, when Grenache lacked prestige in the Australian wine market, Peter had the foresight to double down on it, significantly expanding its plantings at the estate. With time, Peter showed the world what Grenache was capable of in Southern Australia. His High Sands Grenache received 97+ points from the Halliday Wine Companion for four consecutive vintages.

Today, Despite all that he has accomplished, Peter remains focused on perfecting his winemaking and pursuing the little things that will elevate his Rhône varietal wines to the next level. At the smallish estate (180,000 bottles a year compared to 400,000 from the largest estate in the area) he is currently working with 18 different varieties, including small quantities of muscardin and picpoul noir, and is experimenting with skin-contact whites, ceramic egg Grenache, reserve Roussane.

Thanks to the folks at Jackson Family Wines, I recently had the honor of interviewing Peter and learning more about his successful 20+ year career and what keeps him motivated to continue to innovate and evolve.

Nelson: Can you briefly describe your journey to Yangarra?

Peter: My original plan was to be a vet and study veterinary science, but I was academically challenged so I opted for agricultural science. I completed Officer training in the Australian Army. It was in the Officers mess that my curiosity for great wine started. I did some vintage experience in the early 90s and was hooked. I completed my winemaking degree in 97 after two vintages in the Barossa at St Hallett wines. Prior to starting Yangarra in 2001, I was the Chief winemaker of Normans Wines limited.

Nelson: What was it that motivated you to convert the estate to biodynamic farming?

Peter: I was involved in an organic store in 2007 and I had a lightbulb moment at a Manfred Klett biodynamic workshop. I realized the importance of the symbiotic relationship that is required between a plant (vine) and microbes. If you remove that environment with synthetic fertilizers and herbicide, you remove the mechanisms that allow plants to uptake the mineral elements of the soil. Healthy and microbe diverse soils allow site expression. It’s that simple.

Nelson: What do you enjoy most about making wine in the McLaren Vale?

Nelson: What would you say is the most challenging aspect of your role as winemaker at Yangarra?

Peter: The weather, and inspiring those around me to have the same passion.

Nelson: Of the 18 varieties planted at the estate, which is your favorite to work with  and why?

Peter: Grenache. Grenache (Noir) is the variety I am most passionate about. It’s story that has such soul, it’s been a great “Aussie Battler”. It was planted in earnest predominantly for the making of fortified wines, and later fashioned its way into lighter bodied red wines that were called “Burgundy” in the 60s and 70s until it became much more popular to drink heavier full-bodied reds. Shiraz wines were called Hermitage and Cabernet or Claret was far more fashionable. So much of the old vineyards got ripped out, and if it weren’t for the old stubborn growers that kept their old Grenache, we would not be the custodians of our historical old vines today. Even in the early 2000s, Grenache had lost further popularity, and had very much a geek/minority following. It has only been in the last couple of years we are seeing a genuine growth in interest, which is very exciting.

Nelson: In March, your Yangarra Estate Roux Beaute Roussanne 2016 and Yangarra Estate Ovitelli Grenache 2016 will be hitting the US Market. Can you tell us a little bit about these two wines and your decision to age both in ceramic eggs?

Peter: I love the purity these fermenters offer to a wine. It allows gentle extraction, we are basically plunging with our hands. It seems to put tannin and texture on a podium, and really showcases the varietal and mineral expression of the wines.

Nelson: You’ve had a lot of success over your 20+ year career. What drives you to continue to pushforward and innovate?

Peter: You are only as good as your last wine. It increases the pressure to deliver. I love the lead up to harvest, working with our blocks, new trials, tweaking from lessons learned from previous year. Aspiring for perfection means that you can always improve from the previous year.

Nelson: What advice would you give aspiring winemakers just embarking on their own journey in the wine industry?

Peter: Ask yourself, did I honestly give more than 100%? Was I better today than I was yesterday? Question everything, observe everything, build your toolbox of experience and develop your own style as you are given enough rope to be able to express.

From their entry-level Roussanne to their pinnacle wine, High Sands Grenache, Yangarra delivers an impressive array of Rhône style wines that beautifully express the terroir of their estate. These high-quality, unique wines are a testament to the estate’s commitment to biodynamic farming practices in the vineyard and Peter’s attention to detail and restrained hand in the winery. I highly recommend seeking out the wines below:

This estate grown Shiraz comes from 18+ year old vines. 50% whole berries, 25% whole bunches were cold soaked for 5-6 days until the onset of wild fermentation. After about two weeks, the wine was matured in 25% new French oak for 13 months.

The result is a dense and complex wine that is deep ruby in color. It has primary aromas of blackberry, black cherry, and black plum, secondary aromas of chocolate, and cedar and tertiary aromas of fig, and leather. It’s full-bodied with well integrated tannins, acid and alcohol and a generous finish. Drink now, but has potential for aging.

Hailing from the Southern Rhône, Roussanne was first introduced at Yangarra Estate in 2003. Today, 2.5 hectares of Roussanne are planted in soils of weathered sands mixed with ironstone gravels.

The grapes were hand-picked, carefully pressed and underwent wild fermentation. The wine was matured for seven months in  90% older French oak with monthly lees stirring and received no fining.

This is a rich wine with elegant floral, stone and tropical fruit aromas. On the palate its round with enough acid to maintain balance and extra dimension and complexity coming from the barrel fermentation. It has a long fruit-driven finish. Drink now, but has potential for aging.

Coming from the top Shiraz block at Yangarra Estate, this wine get its name from the block’s reddish ironstone gravel soils. The fruit was handpicked, 25% of the bunches go straight into open top fermenters, the remainder is destemmed with only 50% of that crushed. After a 5 day cold soak at approximately 10 degrees celsius, the tank is warmed to 20 degrees celsius to encourage wild fermentation. The wine is barreled aged for 15 months in 40% new French oak and the remainder in the estate’s best second and third use barrels.

This wine has a deep garnet color with powerful aromatics of black fruit, pungent spices, cedar and chocolate.  The aromatics from the nose carry through to the palate with a touch of pepper and herbal flavors. It is full-bodied with round and ripe tannins and a juicy finish that keeps on giving. Theres already a lot going on in this wine but it will gain additional complexity in the coming years with some bottle aging. This wine is an absolute knockout.

The pièce de résistance of the Yangarra’s portfolio, The High Sands Grenache captures the true essence of the estate. Coming from 72 year old bush vines at the top of the estate, the fruit is hand-picked, 100% destemmed and only 50% of it crushed. Similar to the Ironheart Shiraz, theres a 5 day cold soak at approximately 10 degrees celsius, before the tank is warmed to 20 degrees celsius to encourage wild fermentation. The wine is barreled aged for 10 months in 1st and 2nd year-old French oak.

This wine is an absolute stunner. Gorgeous primary floral, red fruit and herbal aromatics are complemented by earthy and savory notes. On the palate its full-bodied and powerful yet graceful. All components working together in complete harmony, its a beautifully structured wine that clearly demonstrates the potential to age and evolve for years to come. Grenache doesn’t get much better than this.