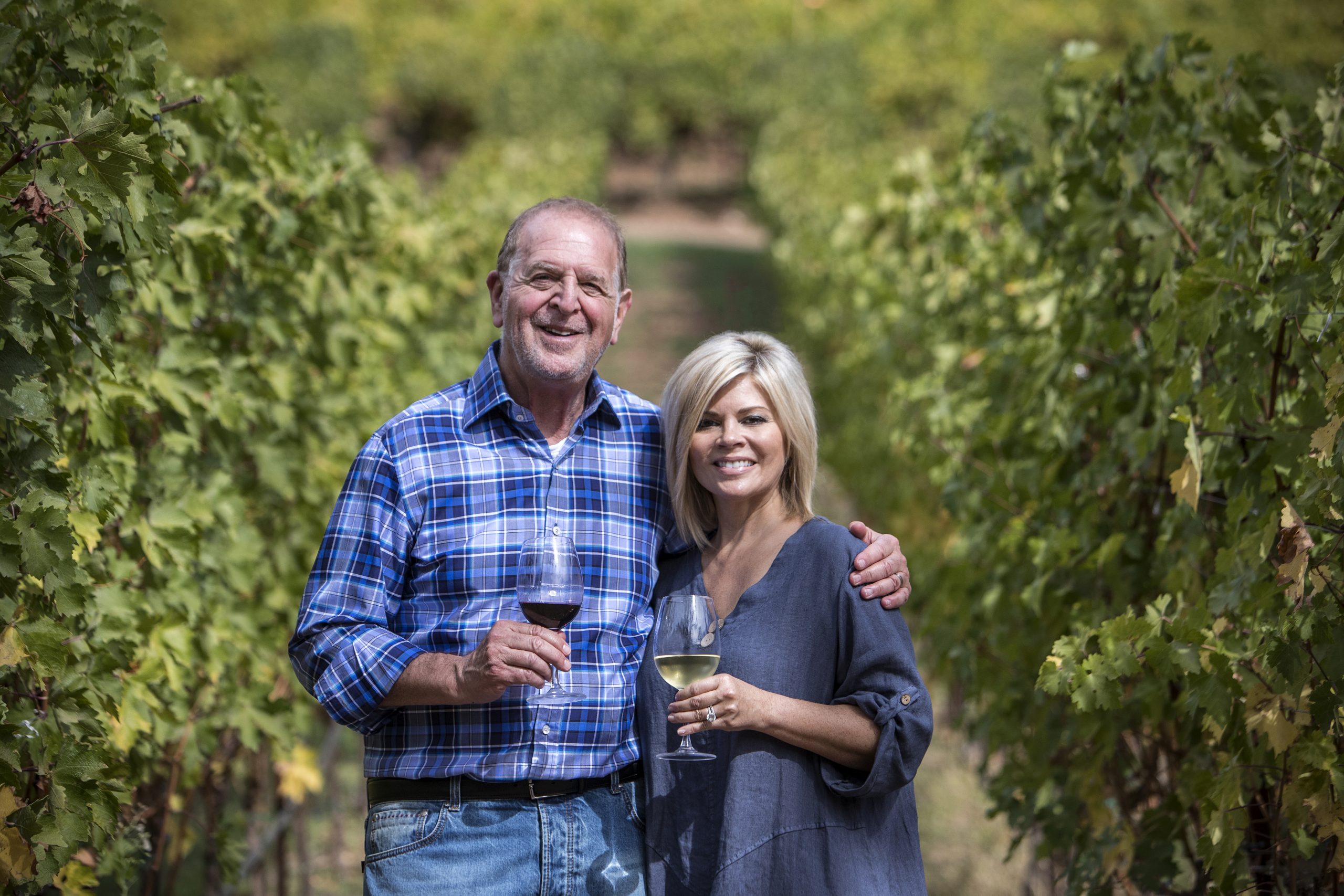 Rich Frank’s name says it all.*

During the first portion of his career, Rich was celebrated as one of Hollywood’s most influential executives during the 1980s and 90s, and during his “retirement,” he is now toasted as the founder of one of Napa’s most iconic independent wine brands. It would be easy for him to just sit back and enjoy the accolades.

But when you talk to Rich, he explains that, deep down, he’s really still just “a kid from Brooklyn, the son of a Edythe and Hy Frank, just a guy who lucked out.” And looking around the renovated barn that his beautiful wife Leslie Frank just refinished in collaboration with Erin Martin Design on the grounds of their 107-acre estate, he admits that, working by his father’s side in Williamsburg in high school in the 1950’s, the biggest dream he had “was of being a writer.”

I visited the Frank estate in Napa recently, spoke with Rich, Leslie and key members of their winemaking team, tasted their wines and left—contrary to my slightly cynical expectations of a Disney/fine wine mash-up, I might add—convinced that both Rich and Leslie are both much more than most writers can hope to be. They’re artists and visionaries perfectly suited for this weird cultural moment we’ve found ourselves in. They know how to deliver pleasure, with thought, and create experiences within the boundaries of their tasting rooms and bottles of wine, that feel boundless.

How on earth did they get from where they started to here?

Unlike many children who grow up to vastly outpace their parents in terms of financial, professional and social stature, Rich openly celebrates and glories in his humble beginnings.

Edythe and Hy, a first-generation Lithuanian-Polish immigrant, met on a blind date. When they married, he began is career in the meat-packing industry in Brooklyn, until World War II broke out, when Rich was a baby. Hy enlisted, and returned after surviving the Battle of the Bulge; he poured every spare ounce of effort and every last dime into his nascent meat-packing business, and the family thrived in relative, working class prosperity.

The first to go to college (University of Illinois), Rich arrived at campus with his big, but vague dreams of becoming a writer. Upon graduation, the weight of the sacrifices his parents made to put him through college precluded any notions, so common to graduates today, of “following his bliss.”

He got a job, a real one that could pay the bills, tangentially related to writing, in advertising. Rich hopscotched from New York to L.A. and from advertising to television, landing at—and eventually leading—Paramount Television Group, Chris Craft Television, USA Network and Disney Studios.

“When I was a kid I wanted to be a writer,” Rich explains. “But then I realized as I really dug into my career was that what I was really good at, was reading and choosing scripts, and then bringing together the right group of creators, of sensing a chemistry that I knew would work. I know how to put art into motion.”

That’s an understatement. Under Rich’s guidance, some of the most beloved classics of one of the most lauded eras in Hollywood television and film emerged: Laverne & Shirley,The Golden Girls, Cheers, Pretty Woman, Aladdin, Ellen, Dead Poet’s Society, The Lion King. Shows and movies that shattered stereotypes, and gave the under-represented and disenfranchised a voice, a platform. Power.

Rich had made it; he was the President of the Academy of Television Arts and Sciences, a globe-trotting entertainment executive who had a knack for bringing the industry’s best writers, directors and producers together.

It was a long way from a meat-packing plant in Brooklyn. But somehow, he wanted more, and at the same time, less.

In 1990, he bought a classic Tudor home in Napa Valley, and created a retreat from the manic pace of Hollywood, a beautiful pocket deep in the Rutherford AVA, where he could nurture and cultivate his growing passion for wine.

Dust doesn’t settle on Rich’s back for long. When all of the relaxation and peace got to be too much for him (two years later), he took a long-shot and bid on a historic, but bankrupt champagne house.

The old Hanns Kornell Champagne Cellar had a Hollywood pedigree of its own; Marilyn Monroe was among the stars who used to swing by for bubbles. Much to Rich’s initial dismay, his bid won the day. After recovering from the shock of owning a winery, Rich did what he does best: he fired up his rolodex, hired the best people in the business, told them what his vision was and let them have at it.

He dubbed the winery Frank Family Vineyards, and since opening the doors in 1993, the beautifully appointed tasting room on Larkmead Lane, full of Hollywood ephemera from his past, has always been bustling. That first year, the winery made 200 cases, but Frank, and his team, noted the effusive critical and consumer response and got, as he says, “serious.”

In 1994, when Frank Wells, the corporate president of Disney, tragically died in a helicopter crash, Rich decided to pivot his attention completely to the winery. Now, Frank Family produces about 75,000 cases of wine from 380 acres, and has been named Winery of the Year twice by the Connoisseurs Guide to California Wine (2012, then again in 2017), in addition to receiving high honors from Wine Enthusiast and others.

Meanwhile, Rich’s future wife Leslie was busy with her own career, and her own passionate love affair (with Napa). As an Emmy award winning broadcast journalist. Leslie’s career took her all over the country.

She reported live from ground zero after 9/11, covered the devastating aftermath of Hurricane Katrina and was inside the courtroom of the Michael Jackson trial. When she wasn’t chasing a story though, she increasingly found herself seeking rest and respite in Napa. When she snagged a coveted position reporting and anchoring at KABC in L.A., she found herself returning here as often as she could.

“There’s something really special about Napa,” she acknowledges, explaining that she and close friends would spend long weekends wandering wine country, soaking up the sun and indulging in the year-round farm-to-table wine-and-food feast gourmands flock here for.

Leslie and Rich met by chance in Napa in 2006 at Bouchon Bistro and shared a bottle of Pinot Noir, but then ran into each other again in 2008 randomly on a serendipitous flight to San Francisco. They made plans to have dinner when they returned to L.A., and the rest, as they say, is history. Shortly after they married in 2012, Leslie joined the team full-time, and now, they both live in Napa year-round.

“I was so excited to leave that commute in the rearview,” she shares. “I remember one Sunday when Rich and I were headed back into the chaos of L.A. from the peace of Napa. I just turned to him and said, ‘Why are we doing this?’”

Leslie gave her notice shortly after, and she hasn’t glanced back once. If Rich conducts the symphony that is the winery, Leslie records, packages and sells the albums. She has taken over most of the branding and promotion of the winery, and has, with Rich, led the push into 50 states and several countries, including Canada, China and Mexico.

While they clearly hold the reins, both Rich and Leslie were quick to tell me that the Vineyard and winery wouldn’t exist without their farming and winemaking team.

“They’re the best of the best, they’ve made us a household name for people who love Napa Valley Cabernet Sauvignon and Chardonnay,” Rich says. “I really credit Todd with that.”

Todd Graff, Frank Family Vineyard’s winemaker and general manager leads the 50-plus member team in the vineyard and winery.

“They are the ideal bosses,” he says, “because they tell us what they want, weigh in when they need to, but don’t look over and question the small stuff.”

It takes real vision—not to mention confidence in the team and the materials they have to work with—to allow the pieces to fall into place naturally, once they’ve been set in motion. But that’s what Rich and Leslie have done, and thirsty fans of terroir-driven Napa Valley Cabernets, and American grower-champagnes thank them for it. Below, a few of our favorites.

Frank Family Vineyards honors its familial and cultural heritage. Hanns Kornell introduced French méthode champenoise to California, and Rich was determined to continue to tradition. Todd came to Frank Family Vineyards in 2003 with a decade of sparkling wine experience. Under his guidance, the sparkling wine program not only celebrates the past, but has forged into the future. The sparklers he has helped create focus on one vineyard at a time. Anchored by the Frank’s 86-acre Chardonnay and Pinot Noir planted Lewis Vineyard in Napa-Carneros, the winemaking team handpicks grapes, and from there, creates four distinct sparkling wines: Lady Edythe (yes named after Rich’s mother), with its flavors of green apples and buttered biscuits; Blanc de Blancs, with its lush and creamy mouthfeel, and flavors of tart pear; Brute Rosé, with strawberries, tart cherries and orange peel; and Rouge, with aromas and lavender and vanilla, and the taste of silky lemon mousse, overlaid with spiced cardamom.

Sourced primarily from their S&J Vineyard in Napa’s Capell Valley and the Benjamin Vineyard in Rutherford, along with additional grapes from neighboring vineyards, this Cabernet Sauvignon is a perfect embodiment of the year and region. There are aromas of espresso and blackberries, and flavors of black and red fruits, red spice, supported, but not overwhelmed by tannic structure. The finish is long and expands on your palate.

Sourced from Lewis Vineyard, in the heart of Napa-Carneros, the maritime influence from the Pacific Ocean creates a climate perfect for the Chardonnay and Pinot Noir that flourishes here. This Chardonnay is a deep dive into the grape, with the Old World-style acidity balancing out its California richness and roundness. Citrus peel, white flowers, the earth.

* (Just in case I have to spell it out: as his last name would imply, he’s honest an forthright. Like his first name, his personal and professional lives have been replete with golden treasures).