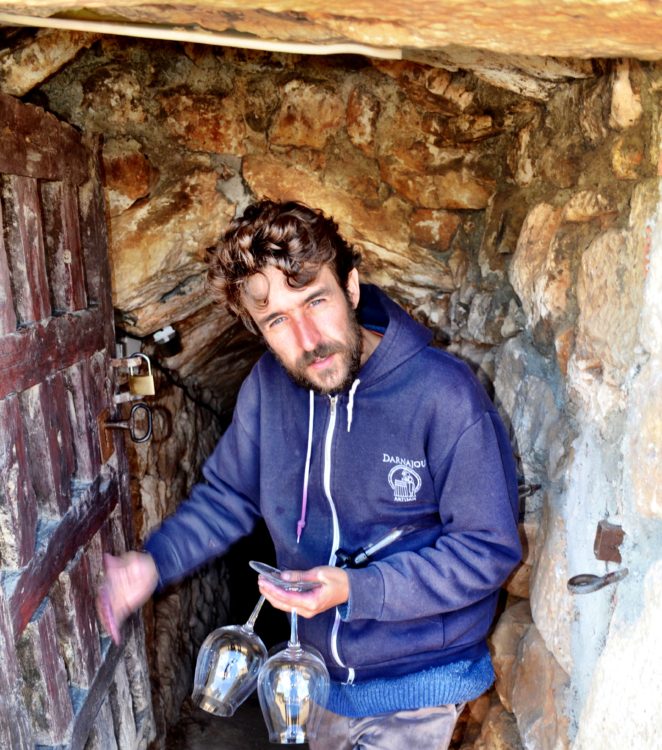 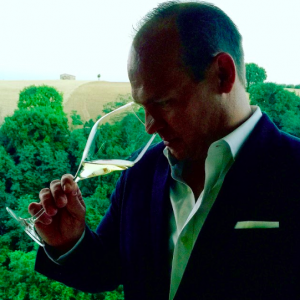 Near Burgos, in the northeastern part of Ribera del Duero, Dominio del Aguila quietly has started making some of the best wine in Spain. Aguila is named for the village it is based in, La Aguilera.  The visit was almost a disaster on account of a planning mishap and of course a bad GPS.  Luckily it turned out to be an exceptional visit, maybe the best we encountered on this trip and certainly one of the most unique ever in any wine region I have visited.  Thankfully our host Jorge was able to accommodate a scheduling blunder on my part.  Within 15 minutes of calling to notify Aguila that we were lost, we were where we needed to be, in the village at the cuevas (caves) used to make these exceptional wines.

As we introduced ourselves it was clear that Miguel was clutch again to save the day translating between Castillon Spanish and our English.  Jorge took one look at our shoes and had a look of “well those won’t work where we are going”.  I immediately knew what he meant as he wanted to take us out to a few of his best vineyard plots.  I immediately said don’t worry about our shoes, we’ll manage as vineyard dirt is easy to remove and in my experience the sign of a good visit.  We hopped into his truck and made our way into the wild, undulating plots that Jorge and his family held or have acquired over the last 11 years or so to build up their hectares of mostly old vines in excess of 40 years, many much older.

The first site was a mixed field blend of very old vines up to 150 years old of black and white grapes, but what looked to be mostly red grapes.  The top of the soil was moist and soft, an alluvial-clay mix that easily left 1-2 inch footprints when compressed.  In fact, most of the surface soils are a mix of sand and clay topsoil studded with gravel rocks, with a base mother rock of calcareous limestone bedrock.  Some top soils are more clay and some more sand, they vary by site but underneath it is the same, the most important limestone bedrock.

Looking around you would not know it but we were at 900-950m altitude in these sites.  It did seem a lot cooler than many other vineyard sites we visited that week and that was with the sun finally out.  As you can see in the photos it was a beautiful afternoon, unlike at Vega earlier in the day.  With a slight breeze and a descending afternoon sun, we had clear blue and beautiful skies.

In total there are 35 hectares of vines in different plots, all on hillsides with different degrees of angle and aspect, though most are east to northeast facing which only adds to the cooler nature of the vineyard sites already high altitude.  5 hectares of the vines are 40-50 years old, with the remaining 30 hectares as old as 150 years of age.  Many of the vineyards are also mixed plantings that have black and white grapes not just of the Tempranillo and Garnacha variety.  Bobal, Albillo (Blanca del Pais), Malvasia, and Tempranillo Gris are just a few of the other grape varietals that can be found in the Aguila vineyards.  Organic farming practices are certified by the Consejo Ecologico de Castilla y Leonardo, the institution that regulates organic wines in the region.

A little background on Jorge will start to reveal the “vigneron” that he is.  Not a winemaker or proprietor per se, but a man of the land and vine.  Jorge worked a few years at a little place in Burgundy you may have heard of, Domaine de la Romanee Conti.   Then he spent time at Vega Sicilia on a special project.  After Vega Sicilia he ended up in Navarro, resurrecting the quality at Bodegas Arzuaga-Navarro.  All the while he was plotting his master plan to have his own label one day once he was able to secure enough suitable vineyard sites.

His father still makes wine from vineyards that his family owns.  I did not meet him buy can imagine the apple does not fall far from the tree with Jorge.  Growing up as a young boy this had to have a big influence on him.  He works closely now with his father in his own vineyards that he was able to purchase, many from family and close friends in the village.  His wife Isabela, besides being a mother to their 2 young children, handles the marketing, PR, etc.  Isabel also makes her own beer, a wheat-based beer that comes in 1L bottles.

Although the first vineyard was purchased in 2004, the first commercial release of the wines was relatively recent with the 2010 Reserva and the 2011 Clairette.  The current Reserva vintage is 2011.  The land is expensive and comes in small plots in many parts of Spain, just like Burgundy because of inheritance and how that splits properties up as generations pass.  As we drove around this is clearly evident as we drive to 3 different sites that were close, but not adjacent in most cases.  In between sites Jorge also pointed out other vineyards that were his.

After the vineyard stops, we arrived back at the cuevas, there we made our way to the first cueva which housed the fermentation tanks, crammed into a tiny space was one steel and one concrete, with one or two smaller open-top vats.  He had two people helping him there now to remove must after just recently draining the steel tank.  The 6 of us barely fit, it sure was a cozy as we tasted some freshly fermented red juice and made our way back outside so the guys could finish sanitizing the room and tank that was just emptied.

Out first stop was in a barrel room where one of the white wines was held for aging.  We tasted 2012 from barrel and it was telling from that exact moment this was a special man and a special place.  The white immediately made me think white Burgundy, a hypothetical Puligny and Meursault hybrid.  The terroir transparency was there as well as perfect balance in the wine.  The haunting aroma of the wine, with its minerally core wrapped in a perfume of fruit, echoes Burgundy.  The palate was persistent and practically weightless with perfect acidity, fruit and oak integration.  A seamless wine and one of the best of the trip, red or white.  The source of the white grapes are from 2 specific vineyards that are white grapes only, and then from old vines in the field blend vineyards.  Next, we tried the 2014 and 2015 from barrel and those were very telling of the great potential of this white wine.  Truth be told and if you have done barrel tasting of young white wines fresh from fermentation and new to barrel like the 2015, there is an art to assessing a wine in such an embryonic state.

We then moved on to the deep cellars where the rest of the red wines were in tank and barrel. Tiny and narrow steps with a low ceiling and narrow corridor led us down some 2 stories below ground to these 15th-century caves. They were originally different sections but joined together by Aguila.  In the same cellars are cement tanks of the same age, centuries old, to age the finished wines.  The tanks were refinished of course and brought up to date so they could be used again.  I am starting to get the impression that many of the best wines in Spain are made in Cuevas.

Jorge first took us down a winding path past a few barrels and tanks into a corner to try the 2014 Claret from barrel.  Aged in seasoned barrels this qualifies as a rose wine but is really a blend of red and white wine that has been made here like this for centuries.  The wine was superb, the textural weight reminded me of Bandol rose wines.

Next, we moved to the red wines and tasted every vintage except 2015, so we tasted 2012, 2013 and 2014.  Some tastings were of the same vintage but a different barrel that was a different site.  Jorge moved like spiderman through the caves up and over the barrels with his glass thief to pluck wine for us to try.  I noticed how the red wines trended away from the newer oak of the earlier vintages to a less oaky profile, as well as more focused and precise fruit, with some elegance from the milder 2012 and 2013 vintages.  So I asked the question, “How much new oak is used in these younger wines and why did you trend away from it?”  Keep in mind this was through a translator so some of this could have been lost in translation in either direction.  Jorge told me that new oak is something he had to deal with as he would not use purchased barrels that were already used and preferred to use the new barrels himself and break them in on the earlier first few vintages so he could season them himself. So over time he naturally would decrease and diversify the amount of new oak in his aging regimen.  Which by the way, if you did not notice his sweatshirt logo, he had more than a few Daranjou barrels in use.  Daranjou is like the Rolls Royce of wine barrels, expensive yet classy and very well and precisely made.

After being completely blown away, Jorge for the 3rd time apologized that he did not have more wine to show me because of the last minute change of plans on account of my error.  No apologies needed, and about 10-12 wines are just fine, especially when they are some of the best stuff of the entire trip to Spain.

We headed back up the narrow and tight stairs to make our way above ground to conclude our visit.  Though we had one last stop at his parents’ casa to pick up a few bottles to bring home.  I can get the Reserva here so I went straight for the Clarete, the second red, a cerveza and two bottles of the family wine that Jorge graciously gave us as gifts.  One he made and was in a Burgundy-shaped bottle and seemed to be a shade darker than the Clarete but still light in color.  Then his father’s wine which Jorge said is more like a Bordeaux in style and is bottled in just that, a slender shouldered Bordeaux bottle.

I can’t stress how much we liked this visit for so many reasons, but most especially because of the quality and originality of the wines.  As great as the Reserva is (and it is), I think it is the least original of the line-up for now.  As Jorge is able to work with more sites for a longer period and finds his stride with the right oak regimen in the wines I believe he will be at the top of the list in Ribera del Duero for sure with Pingus and Vega-Sicilia.  Some would say he is already there, myself included.  However, make no mistake in comparison of what you know of those 2 greats, Aguila is the real “original” deal.  I do not believe Jorge’s intentions are to be as large as Vega, or as “fancy” as Pingus.  Jorge desires to make great wines that represent him, his family, his village and his country.  The following is what comes to mind for me…to not be just like another, but to just be Aguila, on his own terms, means and from his own path.