Along the leeward slopes of Maui’s dormant volcano, Haleakalā, the fertile Ulupalakua Ranch has a rich agricultural tradition steeped in celebration. Ascending up the winding road through Ulupalakua, there are moments when the hills and greenery are more reminiscent of the Scottish Highlands than a Pacific island. But when spaces emerge in the rock wall tracing some of the route, the panoramic view of the ocean some 1,500 feet below is enough to help regain one’s bearings.Here, hidden away behind the same wall, is MauiWine’s Ulupalakua Vineyards.

Joseph Hegele, head of marketing and branding for MauiWine, knows this place well. Having been raised at Ulupalakua, from an early age he was working with the vines, developing a close relationship with the land and the community. This instilled within him a strong sense of place which continues to this day; a passion for every aspect of MauiWine’s work. Indeed, Ulupalakua is in the final stage of becoming formally recognized as the state’s first American Viticultural Area (AVA); a designation which will not only make it the southernmost AVA in the United States, but will bring additional well-deserved recognition to the entire Hawai’ian wine industry.

As part of my series exploring Hawai’ian Syrah, I had the pleasure of interviewing Hegele about the alohaspirit of his family’s winery, energy of its Syrah, and the importance of listening to the land.

Nate Goetz (NG): What is your family’s background in winemaking?

Joe Hegele (JH): My father was raised in Hawaii and met my mother when he lived on the mainland. When they moved back, they would make the drive up to Ulupalakua as often as they could. It had an impact on them; the space has a different vibe and became my mother’s happy place. So when the opportunity came up to take over operations, she embraced it! I was raised in this vineyard, everything from pulling wires to harvest. This is home to me. After graduating from college in Oregon, I stayed and went to work for a wine distributor where I could cut my teeth in the business. The Oregon wine industry is special, it was all about sense of place and community; a group of passionate people who loved wine for the farming side of it. I held onto that enthusiasm for place and farming when I returned to Hawaii.

NG: Tell me about MauiWine’s sense of place and how it is captured in its wines?

JH: Sense of place is all you have; it’s about the culture and community that surrounds you not just the soil and climate. The significance of making wine here is not lost on us as this land that we are on is legendary for both its hospitality and agriculture. It has always provided for the community and through what we do today we connect to the land’s past, its history of celebration, and making a product in line with that. After a near death experience [as captain of a whaling ship], James Makee purchased this land in 1856, naming it Rose Ranch. He believed in living life in celebration and he and his family would host lavish dinner parties and events; so this place has a history of welcoming people and showing them a good time. We like that we continue that tradition by letting visitors experience the land through our wines.

NG: How did Syrah find its way to MauiWine?

JH: When the vineyard was replanted in 2002, Syrah was one of the varietals we experimented with. Throughout the years, it stood out above the other varietals we planted. It just loved growing in Maui. It’s the varietal that proved that we could grow not just good and healthy fruit, but interesting fruit, on Maui. It became a benchmark, we used what we learned and every bit of information it gave us to make decisions for the development of the rest of the vineyard. Every choice we made was weighed against the success of the Syrah, what other varietals might work, trellising choices, canopy management techniques, realistic yields, timing, all of it. We also enjoyed growing a varietal that hadn’t yet been defined by consumers, something that people didn’t know well enough to compare to something they were familiar with. We we’re able to open people’s minds about trying something they didn’t already know.

NG: Given Maui’s unique climate, what is the growing season like for Syrah and what have you have learned along the way?

JH: Syrah likes it here and does well with our growing season which is 30-45 days longer than the average most everywhere else. Its long slender clusters naturally help to resist rot and promote even ripening. The fruit has a lot of personality, is versatile and consistent. The challenge when we first planted was getting a dependable fruit set year to year, but grape vines are extremely adaptive to their environments and our vines have learned and continue to learn how to grow here. For instance, we don’t have what you would call a traditional dormancy and winter weather, but we’ve watched our vines learn to shut down during the off season and not begin to fruit again despite favorable weather conditions. During the summer growing period, our days are short and only reach about 85 degrees, and nighttime temperatures are between 65-70 degrees. This temperature means our vines are continuing to move energy 24 hours a day, actively ripening and developing fruit maturity around the clock [unlike other regions where vines slow at night due to the change in temperature]. We refer to it as “night ripening” and it’s what allows the fruit to reach maturity despite the low heat and short day length in Hawaii.

NG:  What other important lessons have come out of the vineyard?

JH: Grow things your environment is telling you to, and listen to that and not force something to grow in a way that seems unnatural. Our role is to support the land and what its growing, helping it along the way but not disrupting its nature. We ask, “what is our vineyard telling us, what kind of wine does it want to grow and want to be?” We are proud of our approach to always trying new things and experimenting, not simply doing things that others say we should do that might have worked elsewhere. It’s a maverick mentality, and it makes what we do here fascinating. 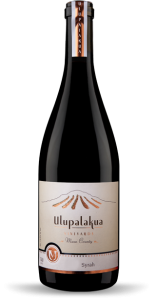