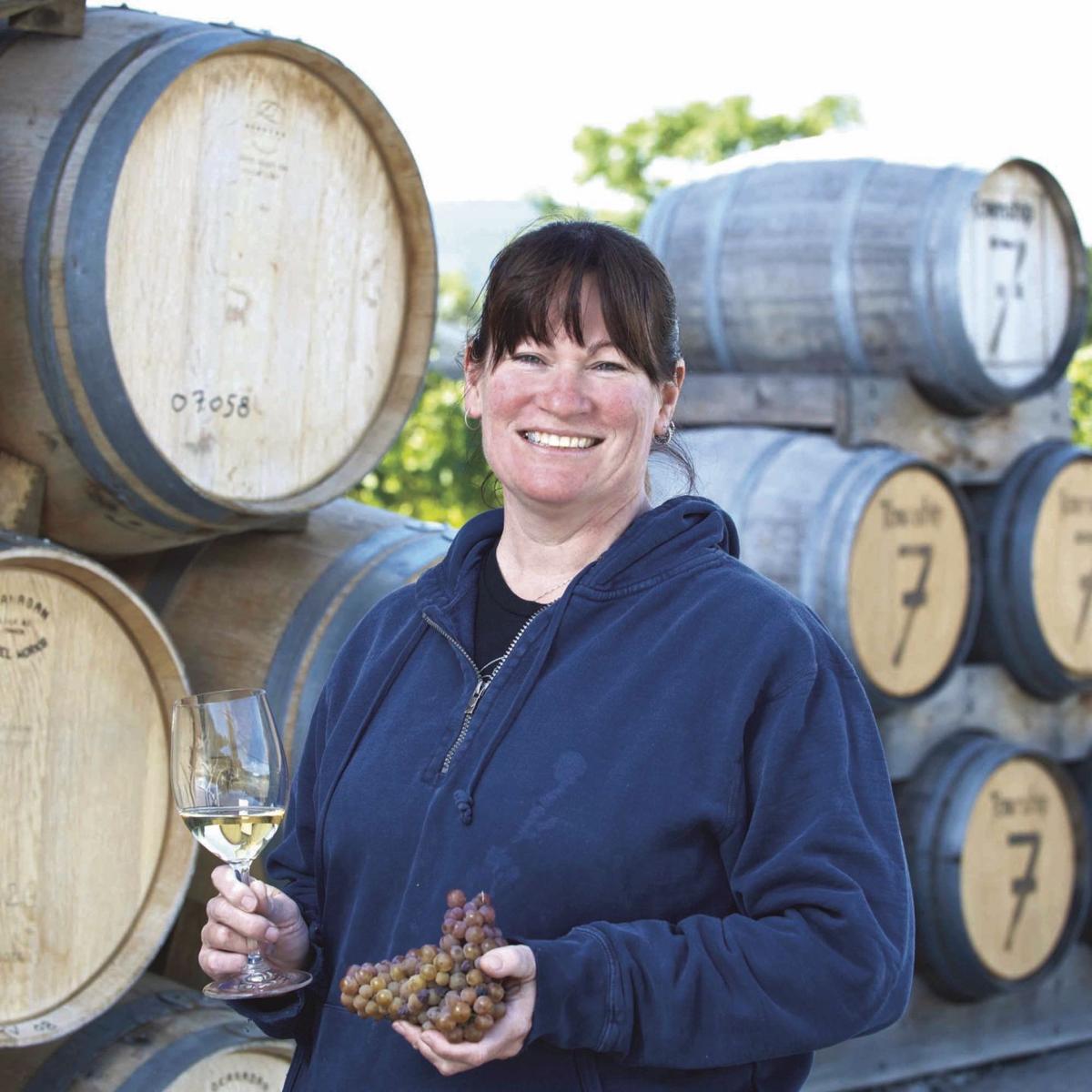 The End of an Era at Dom Pérignon

“I didn’t do it on my own,” Mary McDermott says, her soft, slightly girlish voice belying the determination and tenacity shown in the work she’s done to turn around Township 7 Winery in BC’s Okanagan Valley. “[There have been] tremendous changes in the way it even looks, both property and vineyard, the attitude of people. That gives me a lot of pride.”

We sit on a picnic bench amongst the vines, midway between the crush pad and office at the winery’s Okanagan location, just off of the Naramata Bench, cars whooshing slowly by on a sunny afternoon in June. The vines next to us are young and healthy, already straining past their second training wire, early in the growing season. The crush pad nearby is made of smooth, newly poured concrete, just begging to be stained during pressing. Only a few years ago, Township 7 did not look like this.

“There was really no way to be efficient here, because everything was in that little building,” Mary says, gesturing towards the old winery buildings, which have undergone significant remodelling since her arrival in late 2014. “And so we had to pull [all of the equipment] outside to the front to work and then put it back inside every single day. It was really inefficient, a lot of work.”

But Mary knew, from the moment she submitted her CV to then-owner and now-general manager Mike Raffan, that making wine at Township 7 would be a challenge. At the time, Mary was making wine for renowned Peller Estates in Ontario’s Niagara region, and running their premium barrel and sparkling programmes. She had come from a distinguished early career in Eastern Canada, which included completing her oenology degree at Brock University, making wines with pioneering winemaker J-L at Stratus Vineyards, and then further developing her skills under the tutelage of winemaker Angelo Pavan at Cave Springs Cellars (often considered the foremost producers of Riesling in Canada).

However due to family reasons, Mary and her husband were looking to move back to British Columbia in 2014, and Mary was also looking for a new challenge. “I sent in my resumé [to Township 7], and then they called me like, five minutes after. I was like…oh,” she laughs. “They flew me out here to see the place, [and] when I tasted some of the wines, I felt a little bit…whatever. But then I thought wow — it’s gonna be easy. It’s gonna be easy to do something better than this. Because there were some real issues.” Mary references, for example, the Black Dog and Reserve 7 labels that the winery offered at the time, which were accidental blends made up of grapes that had been hard-pressed and then had sat (largely unnoticed) in barrel for four years.

“It was a big huge step. I was leaving a pretty good job to come out to…” Mary trails off, unwilling, perhaps to detail exactly what position the winery was in when she arrived. “Sometimes you just don’t see everything that happens when you first get here,” she continues, “the building was half the size, the equipment was poor, and the staff that was here, the main guy that had been kind of looking after things after the winemaker had gone, he just wasn’t sure about me. You know, he was like a big burly guy, and it had been a guy’s world here.”

Yet, somehow, Mary persisted. She persisted through staffing changes that saw ‘the burly guy’ depart and the cellar hand at the time, Nate, take over as her right-hand man. She managed, somehow, to order barrels at the last minute for that first vintage, despite there being none in the winery upon her very late arrival in mid-September. And she managed to give direction to an otherwise directionless and seemingly erratic portfolio of wine. To top it off, Mary has been reviving not only one winery site and one programme of wines, but two: Township 7’s original and well-known vineyard and winery in BC’s Lower Mainland area, near the township of Langley.

In the face of these insurmountable odds, it seems almost ludicrous that Mary would have accepted the post in the first place. “I like to do things. A lot of different things. I’m kinda ADHD maybe,” she admits, unable to suppress a grin. Mary attributes her boundless energy to having grown up in small towns in Ontario, and spending a lot of time outdoors, for example being a member of her local 4H club as a teenager. It is partly this boundless energy that encouraged her to seek out a challenge like Township 7. But Mary also acknowledges that the willingness of the winery’s new owner (China-based Ge Song) to inject capital into the business also played a significant role in her accepting the post and in her ability to turn the winery around:

“I had had a lot of experience with purchasing capital and doing big projects at [Trius Winery, in the Peller group], so that [opportunity] for me was cool. And [the owners have] fulfilled on those promises. So we’ve really been able to get equipment that’s helped us to improve the quality of the wine, and to buy a vineyard and work closely with the people who are managing it now — it’s just made such a difference. And it’s going to just make much more difference as we move forward, when we have more control over things we do, and understand the processes better. And having quality people. So when I started, it was a slow process, but now I’ve got a really quality team working with me, and that makes a lot of difference too.”

Mary is certainly known for her ability to cultivate strong relationships; not just in the winery itself, but with her grape growers and other industry professionals in the area. Attributing this in large part to learnings and connections from her time at Peller, Mary iterates that sustaining and developing these relationships will continue to be one of the foundations of renewing Township 7.

Moving forwards, Mary’s focus is to enhance the winery’s Bordeaux-style reds, add a Champagne-style sparkling range, and to produce more single-vineyard wines. Already, Mary’s efforts are yielding results, with her sparkling range winning numerous accolades and drawing media attention throughout the Pacific Northwest of Canada and the US. For example, her ‘Seven Stars’ sparkling taking double gold at both the LA International Wine Competition and the Cascadia Wine Summit this year. On developing the sparkling range out of their winery in Langley, Mary says:

“It’s very exciting because it’s coming from a region where grape growing is a little bit of a struggle at the moment, like with climate change. It’s on the edge of a rain forest, which is not ideal. So to make a really premium wine from that area is going to be really exciting for the winery. Already there’s a little bit of a buzz from the media.”

As for Township 7’s future beyond the sparkling and Bordeaux-blend programmes, Mary hasn’t quite yet decided: “I think we need to find our focus, but I think we haven’t found it yet. And there’s a number of wines that we can make really well — which is a good thing.”

For example, Mary makes extremely high-quality Cabernet Franc and Syrah – both of which have also been recipients of various accolades since her arrival at the winery. Offering blended and single-vineyard expressions, these wines demonstrate power, finesse, and (of course) a keen sense of direction. Mary’s Syrahs are fresh and not too heavy, reminiscent of a Côte Rotie or Hermitage, while her Cabernets remain bright and fruity, with more of a mineral quality than a vegetal one.

Ultimately, Mary concludes, the future of Township 7 is going to be about making great wines, and making them consistently; a process that she has begun, but which she acknowledges still has some way to go. Naturally, completing this resurrection will also involve the crucifixion of some varietals. And this will be no easy feat for a business that once served their Chardonnay to Queen Elizabeth II.

But Mary isn’t daunted by the continued challenges that may lie ahead. As her one-time mentor Angelo would often say when they worked together at Cave Springs: “‘Anybody can make good wine in a good year, it’s the year when the vintage is poor, that’s what you show when you’re made of.’”