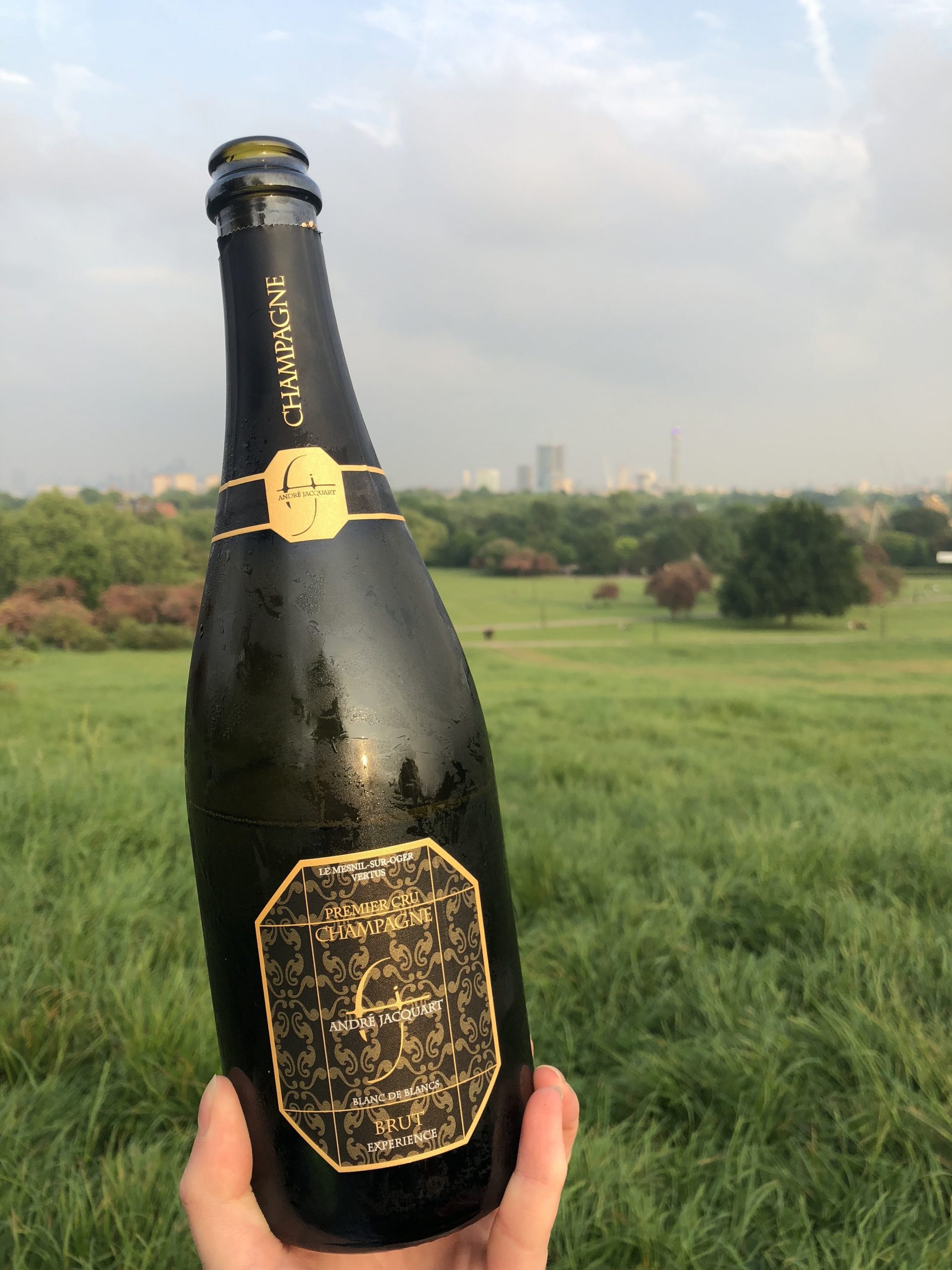 Would You Rather – The MW Edition

As Marie Doyard sits down at our window-side table at Mayfair Comptoir, I can’t help but feel a small jolt of surprise.

She looks so young. Most of the other winemakers I’ve met are easily in their late forties, fifties, or beyond. And most of them are also men. Marie, with her bright blonde hair and beatific smile, is quite the contrast.

I ask her if she’s come to town especially for London Wine Week (one of the largest annual wine conferences in the UK, if not Europe). Actually, she tells me, she was only here for Champagne Live (the Week’s sparkling wine counterpart). As she adjusts her jean jacket, I ask her if it was any good.

“Well,” she says meaningfully, tucking her chin-length hair behind her ears, “it was a little bit different. They changed a few things.” Her brows arch up in that characteristic, knowing French way that means that she wasn’t altogether impressed. “But,” she corrects quickly and emphatically, “change is good.”

After the next thirty minutes of our conversation, I can see that this statement is more than just an assessment of Champagne Live – it is de facto Marie’s personal motto.

Despite being born to parents that both had Champagne-making in their blood, Marie never expected to go into the family business. “I never said to myself, Marie, that’s it, your future is set because your parents have vines,” she explains.

Instead, as a young adult Marie pursued studies in international commerce, and moved to London for ‘a few months’. She laughs as she tells me that this turned into four years in the restaurant business, which is how she began to make her connections in the oenological industry (for example, with Master Sommelier and restaurateur Xavier Rousset).

Marie tells me that the first restaurant she worked in, Putney Bridge, had a wine list of almost entirely new world wines, which both baffled and interested her to no end. This was the initial coup de foudre for her open and innovative spirit.

After her stint in London, Marie returned to France and worked for a high-end events company, organising dinners and receptions for grand marque champagne houses at Michelin-starred establishments. This furthered her knowledge of the industry, her connections with growers, makers, and buyers, and her passion for sparkling wine.

Eventually, in 2003, Marie’s parents called with a proposition. Due to the complex and costly secession laws in France, Marie’s parents were looking to consolidate their familial land holdings in Champagne, and asked her and her two siblings whether they would like to take up their inheritance and the family business of growing and producing champagne. Her brother and sister said no, but Marie said yes.

At only 25 years old, Marie inherited one of the largest single-family holdings of land in Champagne: 24 hectares of high-quality vines, concentrated in the Côte des Blancs, around Vertus and Mesnil-sur-Oger. And Marie had big shoes to fill: her maternal grandfather was André Jacquart, a successful champagne-maker in his own right (and for whom the family’s brand is named), and her paternal great-grandfather, Maurice Doyard, helped to found Champagne’s regulatory body, the Comité Interprofessionnel du Vin de Champagne (CIVC).

Luckily, Marie’s father was on hand to encourage her. As her main partner, he continues to manage the viticultural side of her business, and was on hand to support Marie as she took up her new role. Marie says it has been incredibly easy to work so closely together, as her parents are relatively young and open-minded (compared to many other families in the region), and (she laughs as she tells me this), it might have something to do with the fact that both she and her father are capricorns.

Father at her side, Marie undertook her first vintage in 2004, during which she introduced three key changes to the family’s winemaking process:

Many of these processes now seem commonplace, especially the concept of low-dosage or ‘natural’ wines. But Marie explains to me that at the time, most of these changes were considered radical. So what was her motivation to kickstart this movement?

“I was certain that the quality of the grapes could handle this sort of radical change. I was convinced that ‘low intervention’ champagne would work, that we could make a product of great quality… [I wanted to make] a champagne with great personality, a strong identity, and for a niche market. To make wines with lots of precision, with a ‘unique style’. When people taste the wine, if you can create the sensation of  ‘oh’ it doesn’t matter if they like it or not. And this [was] a way of thanking my parents, my grandparents, and my great-grandparents, who offered me on a silver platter a magnificent gift, that is normally impossible to have these days, and I wanted to honour and thank them for all their past work. I had gold in my hands that I had to transform into something.”

At the time, other champagne-makers were shocked, and couldn’t understand what Marie was doing. Even more frustratingly, because of her new prolonged ageing strategy, Marie had to wait four years without marketing or selling her stock, while continuing to sell her parents’ previous line of champagnes. It was an incredible risk.

“I was ready to lose clients. What I was doing and what my parents were doing was entirely different. So I tired to prepare the clients, the export markets, but it was hard. I lost 100% of the clients. But big changes like this don’t happen without difficulty. So I wasn’t discouraged… I have an affection for export, for travel, and meeting people — and this helped. And now I’m 80% export on 100,000 bottles. It’s a lot more export now.”

While the competitive UK market remains challenging for André Jacquart, it’s easy to see the appeal of Marie’s wines, especially for those who are looking for something a little different.

The real star of Marie’s current portfolio is her 2009 Grand Cru, Blanc de Blancs (Millesime) from Mesnil, which I was lucky enough to taste ahead of its formal release this summer. It has an incredibly pronounced nose of almond and marzipan, yet retains a wonderful freshness and fruitiness on the palate. Her non-vintage Grand Cru, Blanc de Blancs (Brut Nature) from Mesnil is equally pronounced in aroma, but with scents of baked apple and toast, with an incredible, shining, dry acidity on the palate that would allow this wine to pair well with a wide range of dishes. Both of these wines show as unique, carefully crafted products, with their own individual styles.

Marie’s entry-level non-vintage Premier Cru, Blanc de Blancs (Brut) from Vertus is also worth a try. Equally vivacious, fresh, and succulent, it makes for a great starting place for those new to André Jacquart. It has fresh green apples on the nose, along with toasty and floral notes, with fine soft bubbles on the palate and an additional hint of baked apple. As Marie says, the first glass of champagne from an entry-level product is one’s calling card, so quality is extremely important.

Ten years on from the release of her first vintage, Marie is just starting to see other friends and champagne-makers carry out similar changes to their house styles, which she attributes to a change in consumers. Customers have moved from ‘label-drinkers’ to more independent-minded drinkers, and social media has played a big role as well, offering increased communication and exchange about wine. Marie’s openness to discovery and change, and her relatively young age, have allowed her to be ahead of this curve and to potentially be one of the first on the market to offer truly unique champagne that is in keeping with the times.

As for the future of André Jacquart, Marie assures me that they are always learning, and looking for continued opportunities for change. For example, moving towards biodynamic practises and learning to work with the difficult conditions that climate change continues to bring to the region, year-on-year.

Whatever the next ten years may bring for André Jacquart, I feel confident that Marie’s champagne will remain ‘one to watch’ as she continues to embrace innovation with a big grin and the confidence that change is good.