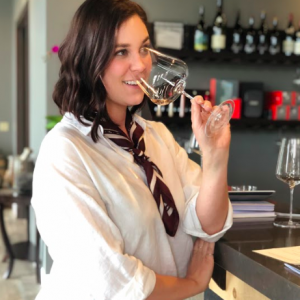 “Change of plans—we will be at the vineyard this Saturday and could welcome you in the afternoon.” That was the message I received from Eve Rainville at Domaine Bergeville days after they had previously informed me that they would not be available for an appointment. My attempts at visiting Québec wineries in late October were futile, especially two weeks after most tasting rooms traditionally close up shop for the winter. Domaine Bergeville wanted to make it work even while they were busy prepping for Raw Wine Montréal. Eve remembered a total stranger from the internet and invited me to their winery. Once you meet Eve and her partner, Marc Théberge, it all makes sense.

Travel an hour east of Montréal and you’re transported to another world. I left from the charming town of Dunham and drove the enjoyable hour to Canton-de-Hatley, noting the lovely fall foliage along the way. As soon as I arrived at the quaint yellow winery, Eve warmly greeted me. We easily started into a conversation about the inspiration for Domaine Bergeville, and the details of their sparkling wines.

While pouring a rainbow of bubbles, I learned the story behind the winery. Marc Théberge and Eve Rainville (hence Berge-ville) met as teenagers and have been partnered up ever since. They obtained Master’s degrees, embarked on careers in engineering (Marc) and statistics (Eve), relocated to Vancouver, Ottawa, Maryland, the UK, and back to Ottawa, and along the way, had two children and a dream of owning a winery. “The dream of having a vineyard started while we were in Vancouver, and I needed a good reason to start saving for our retirement,” Eve shares. “Working and living abroad, and of course, traveling for personal and professional reasons during the following years, allowed us to visit many different wine regions, talk with winegrowers, and define more precisely what we liked and did not like.”  They quit their jobs, relocated to the Eastern Townships of Québec, and Domaine Bergeville was born—from a dream in 1995, to a property purchase in 2008.

Domaine Bergeville lies in the Appalachian Highlands (aka the Appalachian Bench) Region of Québec. The highest altitude in the Québec province makes for cooler nights and less of a diurnal temperature shift between day and night, which makes it ideal for sparkling wines. This region of Québec was the epicenter of the organic and biodynamic farming movements decades ago—central tenets to Marc and Eve as they sought their dream estate. For them, preserving nature and producing an authentic product was nothing short of a necessity.

Realistically, Québec goes beyond a “cool climate.” It can be straight up cold. Marc and Eve recognized this challenge, however, and have turned it into part of their identity. They used this cooler climate to their advantage by becoming the first winery in Québec to focus exclusively on effervescent wines, all made in the traditional method. They are also the first to use organically-grown hybrid grapes in their sparkling wines.

Some of those hybrid grapes include Sabrevois, Frontenac (Gris and Noir), L’Acadie Blanc, Marquette, and St. Pepin. All are cold-hardy of course, and have not only lent themselves to something classic like their golden-hued Le Blanc Brut, but are blended in playful ways as well. The Canonique, a zero-dosage sparkling rosé that is a blend of Sabrevois and Frontenac Gris, tastes of tart wild strawberry, cranberry, cinnamon, and has a touch of bitterness. The L’Exception has a gorgeous ruby color and could be considered a Québécois dry Lambrusco of sorts, made of Frontenac Noir and Marquette. Encountering many of these hybrids on my trip, it was noticeable that the locals take pride in doing something different, particularly in such a challenging climate.

After our tasting, Eve took me through the modest winery and shared some of the additional hurdles they’ve faced along the way. The region has strict production laws that make it difficult to get started and gain momentum: you must first be a recognized farmer by the Ministry of Agriculture (MAPAQ), which requires 2,500 vines in production planted on a minimum of one hectare. Then, in order to be licensed as an artisan winemaker by the Ministry of Alcohol/Games (RACJQ), you must own a winery built on a vineyard, where all the steps of winemaking will take place. Also, your wine must be comprised of at least 50 percent of grapes grown on your own vineyard. Luckily, in Eve’s own words, “We managed to make it because we had enough money put aside at the beginning, and because we teamed up early with a great private import agency that put our wines in all the great restaurants of Québec.  You can make the best wines in the world, but unless people taste them and drink them, you won`t be able to fund your dream year after year!”  Their nest egg along with plenty of patience allowed them to plant their vines in 2009, pick their first harvest in 2012, and sell their first vintage in 2014.

After more peeks into their winery and vineyards, admiring their riddling racks, and digging into lab reports, I felt so grateful to get to know Eve and Marc while they are still growing. This year, Domaine Bergeville is producing 35,000 to 40,000 bottles. They have maxed out their current 3-hectare property and are purchasing another organic parcel of farmland where ten hectares of new vines will be planted over the next few years. This former engineer and statistician are hoping for the opportunity to export to the United States soon. Their wines were being poured at some of the most relevant wine bars and restaurants in Montréal, and I, for one, will be cheering on their continued success.