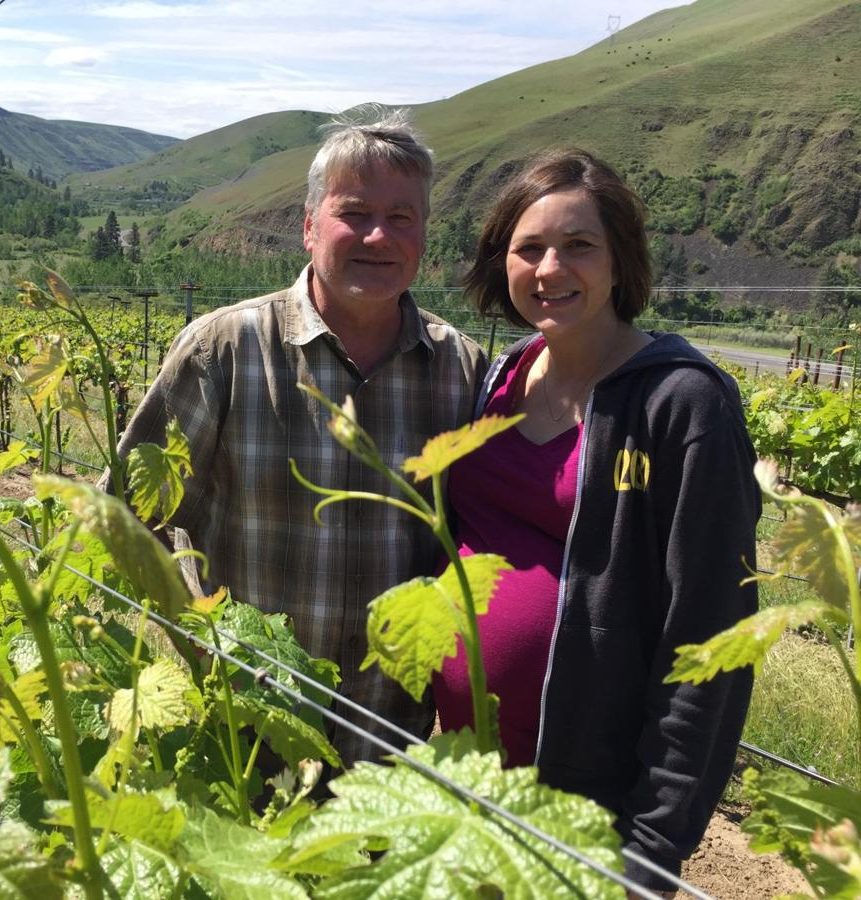 Mike Pearson and Melissa Sanborn were the driving force behind the establishment of the Lewis and Clark AVA and are champions of Northern Idaho’s unique terroir.

At the early age of 19-years-old, Melissa Sanborn knew she wanted to work in the wine industry.  Growing up in the state of Washington, some of her fondest memories are road trips her parents would take her on to tasting rooms on Red Mountain, now known for some of the best terroir in all of Washington. She would go onto study chemistry in college and marry a fellow chemist, Mike Pearson.  They were a match made in heaven and they both even liked to dabble in at home fermentations.

“He [Mike] was also into growing things, a man with a green thumb, and once I finished my graduate work in wine science, he started bringing up the idea of planting a vineyard,” said Melissa.  This would set the plan in motion as the couple knew they wanted to own an estate winery in Idaho. They would stumble upon a vineyard property located in Juliaetta approximately 30 minutes over the eastern Washington border in the panhandle of Idaho. Seven acres of neglected vines were planted that would require two years to revive-while continuing to plant the remainder of the 30 acres over a five year period – not an easy task.  They would name the vineyard Colter’s Creek in honor of the river that flows past the vines.

Their first release was in 2008 sourcing mainly grapes from Washington while Colter’s Creek initial estate harvest was the next year. The key focus is to get as close as they can to being an estate winery. “As of 2017,  90-95% of our grapes are from our own vines,” said Melissa.

One of the driving success factors for Colter’s Creek has been to play a pivotal role in establishing the Lewis and Clark AVA ( American Viticultural Area).  “We wanted our AVA to be based on science, not politics and the boundaries are not dictated by state lines or population centers. It was determined through climate, soil and geology data,” said Melissa.  The Lewis-Clark valley is centered around two major rivers while the topography is comprised of steep river canyons and huge deposits of river sediment as well as pebble.  Colter’s Creek has been able to ride out many of the freeze events that crush the Pacific Northwest due to its unique terroir and climate.

The area often gets compared to the Walla Walla, Washington wine region due to its proximity, but it is quite different.  Lewis-Clark Valley offers an awesome outdoor playground while providing a less expensive wine experience than you might be more likely to find across the state border. “I think people see the Idaho industry as a value wine experience. I hope it stays that way even with an increase in tourism,” said Melissa.

The winery’s primary focus is trying to increase distribution to meet customers’ demands around the country, which has not been easy.  “When we first started selling our wine,  Idaho did not have much of a reputation of producing good wine,” said Melissa, “It took a while, with both in and out of state distributors, to change their views on Idaho wine in general- it’s happening slowly.”

When contemplating the Idaho wine industry at large, Melissa would like to see more vineyards going into the ground. “I think there is strength in producing wines from grapes in your backyard.  I know our customers are savvy and recognize this,” said Melissa. “I definitely think we have the grape quality in Idaho to be a distinguished player in the industry.”

Colter’s Creek wines, stylistically, are a continuation of Melissa and Mike’s travels around the world intertwined with the culture and the uniqueness of what the region has to offer.  “It seems like every year over the last five years a new varietal has come into maturity from our site, and our wine making style definitely evolves as we learn how to manage those wines,” said Melissa. They are making bright, balanced food-friendly wines. “Nothing we produce is super big because our grapes aren’t ‘super big’.  I’m loving the Syrah, Tempranillo, Grenache and Cabernet Francs that I taste from our region,” noted Melissa.

The estate vineyard is one of the oldest commercial vineyards in Idaho dating back to the early 1980’s. The property is unique in that the vineyard and the production facility are at the end of a steep, one lane road. They do everything onsite from growing the grapes to composting the grape waste to letting the chickens eat the bugs from the vines, which in turn provide eggs that are used at the restaurant/tasting room.

If you are in Juliaetta, you can swing by Colter Creek’s on Main St. to visit their restaurant and tasting room that offers up an eclectic menu along with their wines. They also have a second tasting room in Moscow, Idaho.  Go visit the Lewis and Clark AVA for its rugged natural beauty; stay for the broad diversity the wineries have to offer.

A touch of black pepper, black licorice, dried cherry and Italian plum are coming through on this wine.

A blend of 46% Graciano; 46% Mourvèdre; and 8% Malbec this wine will have you out there on your back porch cooking up a sirloin.

Bright dark plum with blackberries on the nose- you get a little bit of cranberry coming at you. At 14% ABV,  this wine is accompanied by balanced acid and a slight meaty finish.

The cooler growing season added a touch of complexity while further accentuating the flavors.  Hand picked and aged in a combination of neutral French and American oak for 17 months, this wine truly showcases the great climate and soil types the Lewis and Clark AVA has to offer for Rhone varietals.

This wine has me craving a leg of lamb.

Earthy almost rustic cherry red in the glass. Pomegranate and cherry come through on the nose, but ever so delicately. At 13.5%, this balanced wine has nice rounded tannins and shows a lot of restraint.

This wine would go great with a plate that includes vegetables and cured meats.