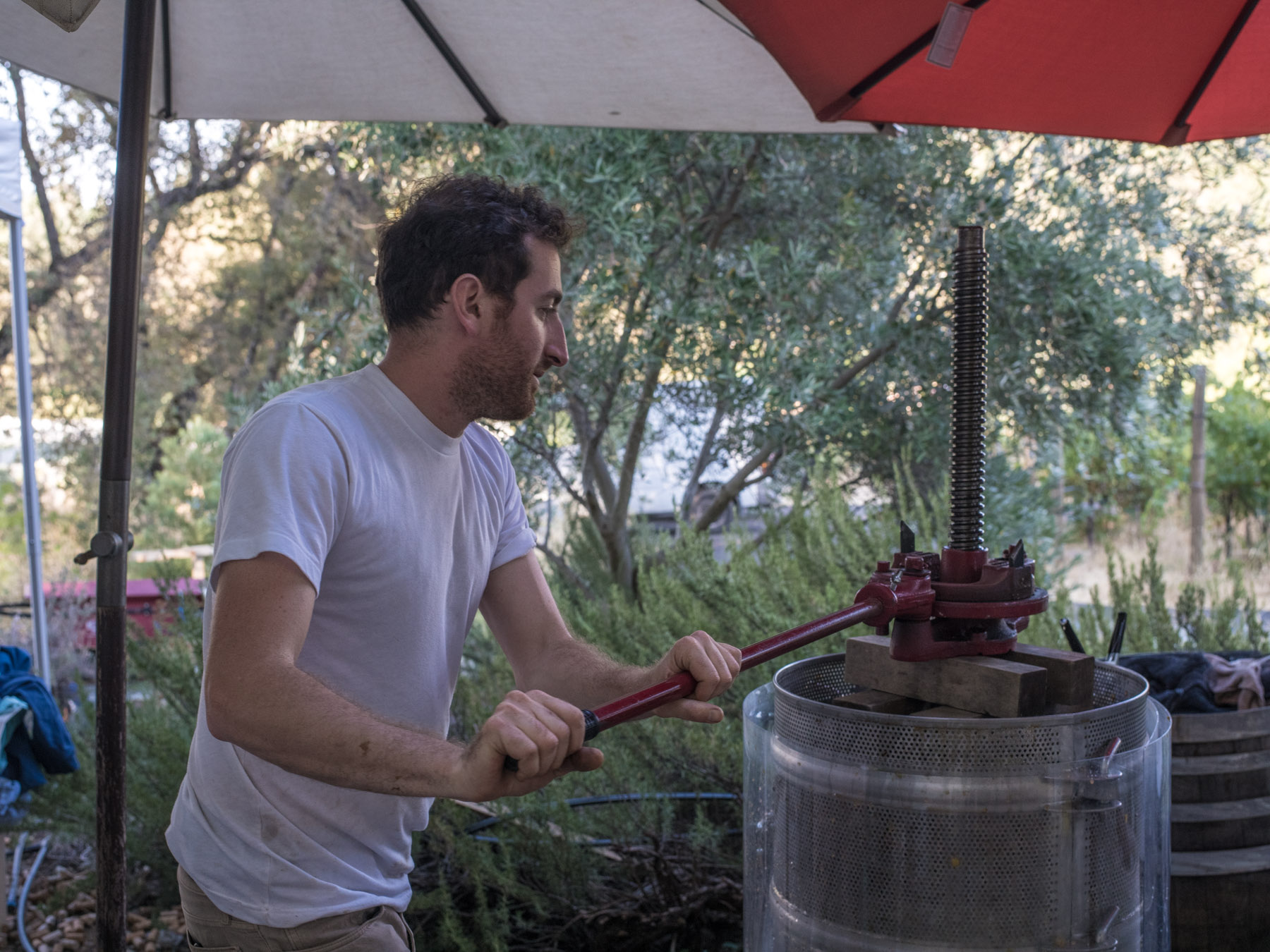 “I’m not trying to take advantage of any special moment. I just want to make a small amount of wine and have people be very excited about it.”

Intrigued by Southern Chile winemaking, in 2013 a US expat named Dani Rozman ventured to Itata, Chile to work with Juan Ledesma, a winemaker who was researching how musical vibrations impact the winemaking process. Dani made this journey at the recommendation of good friend and future business partner, Leo Erazo, who oversees winemaking at Altos Las Hormigas.

Now, in January 2020, Dani is about to start his sixth harvest in Itata, and has completed seven harvests in California, five of those being in the under-the-radar- North Yuba, California AVA in the Sierra Foothills. His California vineyard is seven acres, largely uncultivated, and bustling with thriving (yet contained) wildlife. The name of his wine is ‘La Onda,’ which translates loosely as ‘the vibe’ from Argentine Spanish, homage to where his wine exploration began.

While in Itata, Pais and Cinsault grape expression made a tremendous impact on him, sparking his passion for the region and the potential of this varietal beyond this geography. So he decided to make these wines in North Yuba as well.

“I’m making a lot of wine in both places to explore the connection between the two regions,” he explains.

If you’ve never heard of North Yuba, you’re not alone. It’s just shy of 20 miles north of the Sierra Foothills, and there is only record of one other winery there, called Renaissance.

In North Yuba, Dani employs many minimalistic methods he learned from Juan Ledesma in Itata – techniques he views as common sense.

He explains, “It’s not a dogmatic thing. If you put a lot of thought and care into the work you’re doing, the wine ends up being more special. That’s why we’re working in smaller quantities vine-by-vine and with a sickle vs. tractor, passing wines by gravity in the cellar instead of pumping them.”

As a matter of philosophy, Dani focuses a great deal of attention on making great wine while it’s still on the vine. La Onda’s harvest practice follows suit, with the team passing through the vineyard multiple times daily for as long as eight weeks, picking just a few hundred pounds of grapes at a time.

“What we’re doing is a very specific thing,” Dani says, “There are only five to 10 wineries around the world where you can make wine this way. For me it’s nice to have a simple process. We pick the grapes, we stomp the grapes, and then the grapes ferment. That’s it.”

This collaborative effort is focused on the ancient, unirrigated and ungrafted vines in the hills of Itata. They explore sites that highlight the granitic soil and maritime influence that makes this region unique, and seek to make wines with intensity and freshness. The winemaking is very simple, and they use cement tanks as well as open Rauli vats. Grapes are foot-trodden as well as hand-destemmed in zarandas (the large bamboo mat-like sieves that are extended on top of the vats) utilizing traditional winemaking techniques. The wines are produced on a cliff overlooking the Pacific Ocean and the town of Cobquecura.

A few things stand out. The fact that Dani learned about winemaking from Gideon of Clos Saron. In addition, his wines are quite serious which is in contrast to a lot of the lighter, easier, younger drinking natural wines coming from the West Coast. His wines need time and he is willing to stick it out until he really feels they’re ready. And Dani’s a good ping pong player.

For the past five years, Dani has been making five wines that he farmed, and purchasing grapes for a few others. His extensive manual practices certainly disputes any notion that ‘simple’ is easy.

I asked Dani about his wine production and perspective on natural wine as a trend. Here’s what he had to say:

Do you envision making a greater quantity of wine at some point in the future?

To me, it’s important to be doing the work and making wine from the grapes that you farm. I don’t really care if I make 10 wines if two or four are from grapes that I farm, but at a certain point, I just can’t do all the work. I’d rather do the work on my own, or with someone who works closely with me. I really like to be part of the entire process. Scaling up isn’t of great interest to me.

The California production adds perspective and additional learning – exploring the potential of the grapes and the land. Onda Brava is my partnership with Leo Erazo in Chile, in addition to A Los Viñateros Bravos. As we have a common interest in organic farming and Itata’s terroir, we’ve been making wine together in Argentina and Chile since 2014. Currently we’re making Rosado from 150 – 200 year old unirrigated Pais vines by the Chilean coast, and Cinsault from 60-80 year old vines in the same area. This experience and others like it inspired me to grow these grapes in North Yuba as well.

You don’t list the varietals on your labels. Why is this?

Often people pass judgment on wine or grapes before they drink the wine. I don’t want people to assume about what it’s going to taste like. I’d like them to explore the wine and come to their own conclusion.

What do you think is the future of natural wine?

I don’t view this as a trend … once you start caring about the food you eat and your health, it’s hard to not make other choices that are similar to that. Once you have the chance to drink really good wine made without nasty chemicals in the vineyard, that doesn’t just go away. I don’t think the importance of good farming and good winemaking will be changing in the future. I just don’t see it going backwards.

What do you think of the term natural wine?

My wine is simply a wine and beyond that people are welcome to come to their own conclusions. Personally, I don’t think it’s helpful for anyone to label their project in that way.

Are there any other words you prefer your wine not referred to as?

Funky. I’m certainly not trying to make funky wines. The wine could be enjoyed by a person who’s into natural wine, but also their parents. They’re approachable.

Do you think it’s a good idea for large producers to also enter the natural wine game?

I think that it’s not a bad thing that larger wine companies are forced to react to this. I think it’s important for everyone – in all income brackets – to have access to responsibly farmed fruit and food. I don’t think people should be priced out of drinking good wine without crap in it.