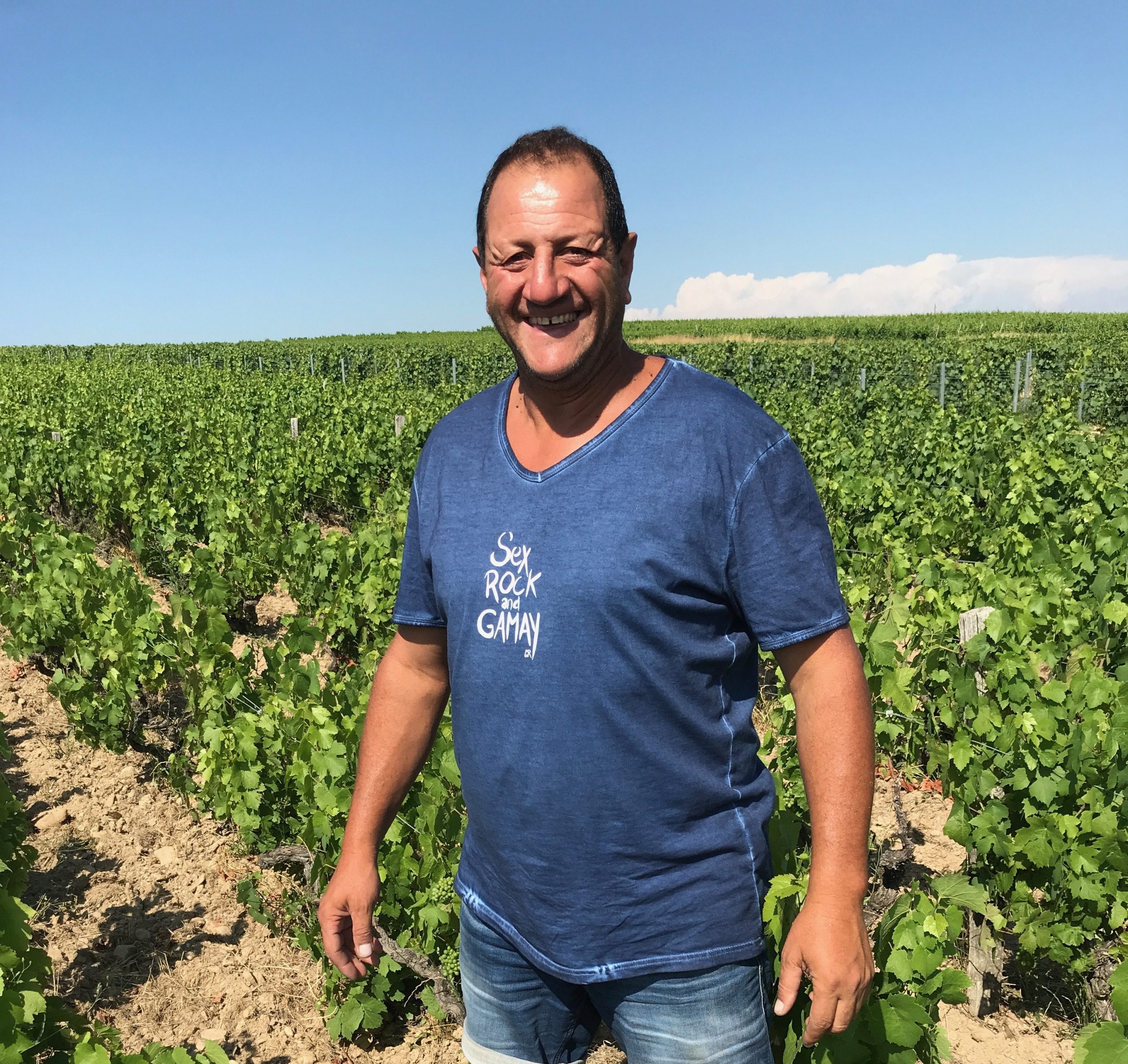 Born in Lyon to Arabic heritage, Karim was adopted by a family in Morgon, eventually working for 10 years as a vineyard-hand and winemaker for Beaujolais legends such as Guy Breton and Marcel Lapierre. When he started his winery, he was told that use of his ethnic first name on labels would limit his sales and as a result, he initially labelled his wines simply as ‘K. Vionnet.’ As time passed, Karim embraced his North African roots and not only began including his full name on his wines but also named his Beaujolais Village “Du Beur Dans Les Pinards” which loosely translates into “Arab in your wine”  derived from the French expression “du beurre dans les épinards“- something you say when you have extra money that will allow you to “add a bit of butter in your spinach.”.

I had the pleasure of chatting with Karim this summer. During our conversation, his passion for honest winemaking and his love for the region of Beaujolais were evident. He’s a true winegrower, hands-on in every aspect of his business, committed to producing the best wine he can.

Learn more about his story in our interview below.

Nelson: You were born in Lyon but raised in Morgon. Was wine a big part of your life growing up?

Karim: Yes and No. Growing up there was always a bottle of wine on the table at home but I didn’t come from a winemaking family. My father was an artisan by trade and didn’t make a lot of money. At the age of 10, I started working in the vineyards to make a bit of pocket money for myself.

Nelson: Prior to becoming a winemaker, you were a baker by trade. What was it that motivated you to pursue a career in winemaking?

Karim: I grew up in the same neighborhood as Marcel Lapierre and was good friends with his nephew, Christophe Pacalet.  Every year on the 14thof July, Marcel would do a Moroccan lamb roast.  Marcel would always go to the tanks and syphon off a few bottles to throw on the table. After he was done, Christophe and I would go over to the tanks and drain off whatever wine was left from the tubes. I loved the whole experience and knew one day I would make my own wine.

Nelson: Who have been some of the most influential people in your career as a winemaker?

Karim: Growing up, I was surrounded by incredibly talented winemakers. Around the age of 18, I decided to pursue a career in winemaking and knew from that early moment that I wanted to make wine naturally, similar to the people I was around – Marcel Lapierre, Guy Breton, etc. My career in wine started after serving in the army. I worked with the brother of Jean-Paul Thevenet for 11 years and learned a tremendous amount about wine during that time.

Nelson: Where do you source your fruit from?

Karim: Techinically, I’m a negociant but I do a lot of the farming myself. I oversee the organic farming and vinification of 5 hectares of plots around Beaujolais, most of which are 40 to 60-year-old vines. Currently, I grow about 60% of the fruit myself. The remaining 40% I purchase from other growers. By next year, I expect that ratio to be closer to 50/50. I’m currently working with a few growers to convert their vines to organic farming but it takes time to convince them to move in this direction. It’s a slow process that could easily take another 4-5 years.

Nelson: What do you enjoy drinking when you’re not drinking Beaujolais?

Karim: I’m hardly ever not drinking Beaujolais but I do love wines from the Loire Valley.

Nelson: What do you consider the most rewarding aspect of the wine business?

Karim: Connecting with people across the business, other growers/producers, importers, etc., and seeing the evolution of my wines and the acceptance they’re getting around the world is very rewarding for me.

Nelson: You’ve been producing your own wines for approximately 13 years now, what has been the most challenging aspect of your journey?

Karim: Well, the challenges actually started even before that. I wanted to start making wine in 2001 but given that I wasn’t the son of a winemaker or vineyard owner, it was absolutely impossible to find land. It took a lot of time to piece together disparate parcels in order to start producing my own wine. My parcels being so disparate continues to be a challenge for me till this day. Another major challenge has been the need to constantly lease space to produce my wines.

Nelson: What are some things on the horizon that you’re excited about?

Karim: In the near future, I’m looking forward to a successful harvest. Beyond that, I’m excited to be able to invest more into my business. Perhaps in a bigger space that enables me to operate without the constraints of the space I’m currently in.

Nelson: If you could open a bottle of wine with any three people (living or deceased) who would they be?

Karim: My father because he was a bit cynical when I started making natural wine, Marcel Lapierre because I would love for him to see the evolution of my wines and my family and friends who have helped me over the years but knowing them, one bottle wouldn’t cut it. It would have to be a magnum at the very least!

Nelson: If you could you give the younger Karim just embarking on his career in wine any piece of advice, what would it be?

Karim: You’re going to work your ass off. But don’t worry, it will all be worth it.

This wine is the perfect example of why I love Beaujolais – affordable, incredibly delicious and easy drinking. The only downside is that you’ll be disappointed when you quickly realize there’s none left. The perfect entry into the special wines of Karim Vionnet. Enjoy now.

Du Beur Dans Les Pinards is typically sourced entirely from the vineyards of Beaujolais legend Jules Chavet . However, in 2017, Karim’s parcels were almost completely wiped out by hail. The 20% recovered was used to make a sparkling wine and this cuvée was made with fruit sourced from other parcels. Despite the unfortunate turn of events, this is still a fantastic Beaujolais Village. Balanced and complex with nice floral elements. Enjoy now.

KaV for Karim Vionnet and KaV sounding like Cave (cellar). The vineyards have a northern exposure and are located below the Col du Truges which has an elevation of 480 meters. The label was designed by friend Michel Tolmer, author of the highly-regarded wine tasting comic strip “Mimi, Fifi & Glouglou” and was conceived (not so surprisingly) one night at a bar.

If you’re a fan of Cru Beaujolais producers such as Yann Bertrand, Jean Folliard and Yvon Metras, then I urge you to seek out the wines of Karim Vionnet and enjoy the Arab in your wine!

Special thanks goes out to Michael Whidden and Steve Kelley at Regal Wine Imports in New York City. Steve for acting as translator during my Skype Interview with Karim and Michael for coordinating the meeting and photographing Karim in Beaujolais for this piece. Without their support, this interview would not have been possible.