by Eleanor and Markus 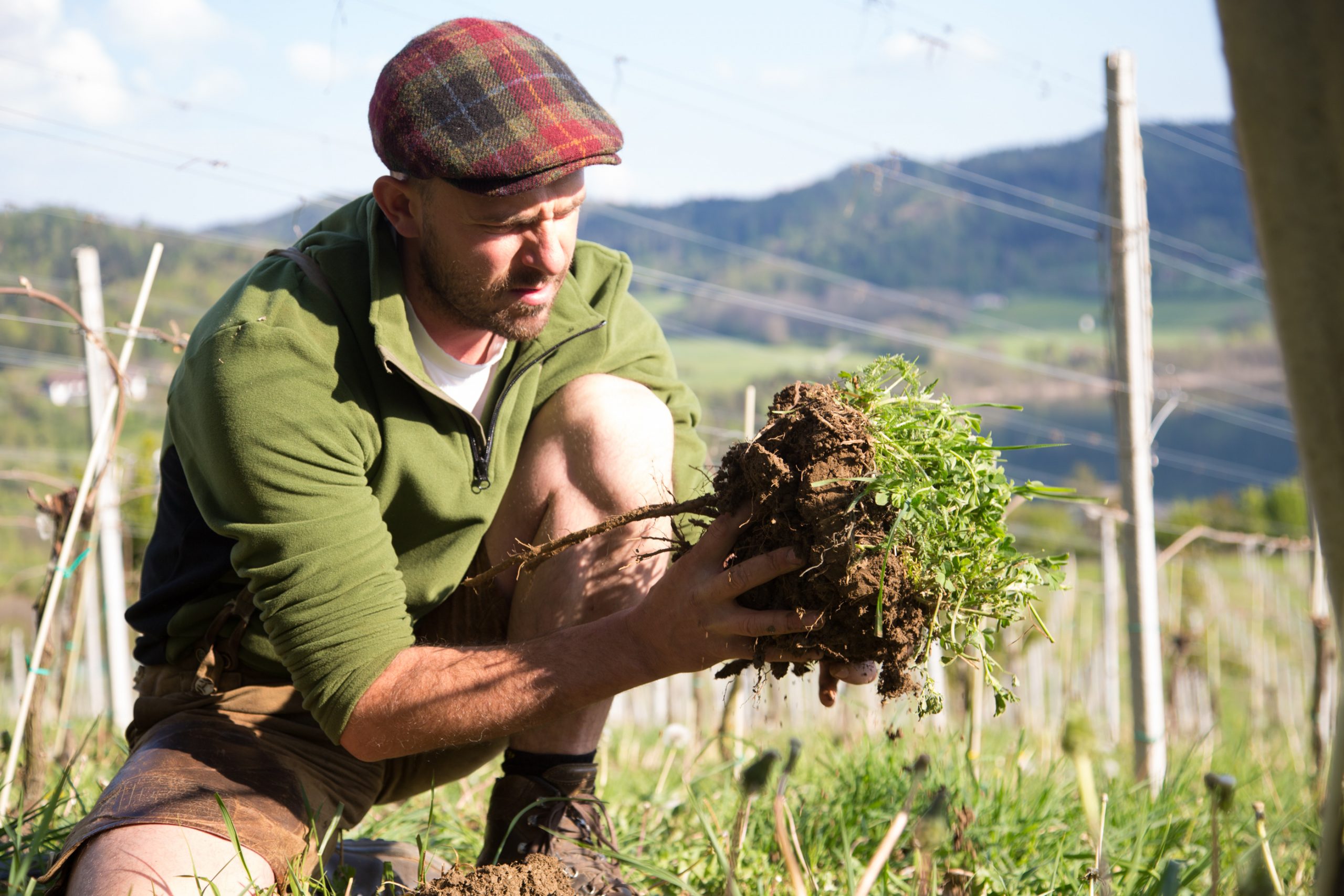 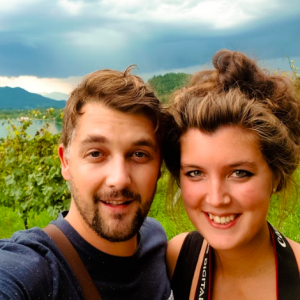 Look behind the big names in Austrian wine and you’ll find that, small as it may seem, this country has plenty of room for new and experimental producers. The first time we came across Marcus Gruze, founder of the Georgium wine estate, we knew that we were on to something special. We’ll say it straight: Georgium wines are not for everyone. But they are, without a doubt, wines that will make you sit up and listen – even see the world in a different light. We paid a visit to the wine estate in St Georgen am Längsee to find out what makes Marcus Gruze – and his wines – tick.

First of all, a brief word on wines from Kärnten. ‘Carinthia’ in English, Kärnten is Austria’s southernmost state, sharing borders with Italy and Slovenia. Although you might expect this area to be Mediterranean in climate, the high barrier of the Alps makes it a defiantly cool climate zone. We’re talking lots of sunshine (but also lots of rain), big temperature drops at night and long, slow autumns perfect for a late harvest. Though historically a lot of wine was produced in this area, it died out in the mid-19th century and has only made a small comeback in the past forty-odd years. A total of 130 hectares across the state are planted most commonly with Chardonnay, Sauvignon Blanc, Pinot Gris, Traminer and Pinot Noir. Thanks to increasingly challenging weather conditions and their low-profile image, wines from Kärnten are not easy to make and sold mainly on the local market. They’re considered something of a rarity, even in Austria.

Even more rare, however, are wines like Marcus Gruze’s – namely natural wines from Kärnten. When we chatted to Marcus and his partner Uta, they were quick to tell us that their wines are ‘normal’, based on a long Burgundy tradition of making oxidative wines. To your regular wine drinker, however, these wines belong firmly in the ‘natural/orange’ category. And we don’t think that’s a bad thing. Being different, they should celebrate it.

To really understand Georgium wines, you have to understand Marcus Gruze’s philosophy and how he got to where he is today. Growing up in St Georgen am Längsee, a small village in Kärnten that’s known for not much other than a large monastery and its 1.3km-long lake (yes, ‘Längsee means ‘Long Lake’), Marcus was pretty much destined to become a restaurateur. His parents ran a Gasthaus (a traditional eatery) and aged just fifteen he headed off for practical training as a waiter and chef. Being rather good in the kitchen, he worked in top-end restaurants in Hamburg and London. You’ve all heard those chef stories, right? The long hours, the crazy lifestyle and, he emphasizes, the waste all started to get to him after a while. He realized that he needed to change something – and he was going to start with himself.

Travelling to New Zealand, he took a job in a restaurant with a vineyard attached. Sooner or later, winemaking had him hooked. He learned as much as he could in New Zealand, followed by stations in Austria’s Steiermark (Styria) and Switzerland, before returning home to help his sister take over their parents’ business. By 2008, he had transformed it into a small but intensely beautiful wine estate – one that he was determined to run on his own terms.

In recent years there has been something of an explosion in natural and orange wines. Few wine topics are so widely talked about or so controversial. Austria has seen a number of its wine estates – be they new or generations-old – turning organic, in a process that is notoriously complicated and strictly controlled. Some of them take it a step further and become entirely biodynamic, working on the principles of 20th century philosopher Rudolf Steiner. If you’re interested in finding out more, organisations such as Respekt Biodyn and Demeter (website only in German) unite some of Austria’s most exciting biodynamic winemakers under one umbrella.

In case you’re not 100% sure, biodynamics is a method of cultivation that sees everything holistically: plants, animals, soil, weather and natural cycles are all given equal importance. In a vineyard, this means the use of solely biodynamic sprays that aim to strengthen the vines’ natural resistance to disease rather than specifically targeting pests, special preparations (often involving cow dung and horns) that are used to treat the soil, having a sheep or two to act as a natural lawnmower and fertilizer, and planning events like harvest or soil treatment according to the lunar calendar. Marcus also has a horse, which he is training up to use instead of a tractor. In Georgium’s cellar, the grapes are treated to skin contact and spontaneous fermentation, the wines are unfiltered and have very few or no sulphites added. The result, as you might expect, is a selection of exceptionally different wines.

Although most biodynamic winemakers are completely committed to their cause, we have rarely met someone as deeply passionate about it as Marcus Gruze. A true philosopher of our times, he is not only deeply knowledgeable about Steiner’s ideas but quoted numerous other great thinkers at us, including Goethe and Hildegard von Bingen. As much as he loves wine and wine production – or perhaps because of that – he says that it’s ‘hard to put into words what wine is’. One gets the sense that it’s a feeling for him, an emotion, the thing that opened the door to the way he wants to live his life.

The one thing that he can definitely say about wine is that ‘great wine is found by water’. If you look at some of the greatest wine regions across the world, you’ll see what he means. Though it may be a small and not-so-famous body of water, Längsee actually does have an astounding effect on wine production. Georgium’s three hectares of vineyard are arrayed on a slope above the lake, protected by an area of woodland at the top and benefitting from the micro-climate caused by the lake. The water has the ability to balance out temperature and weather extremes – for example, when surrounding areas are just below freezing, land near the lake remains just above. Or if, as when we visited, a sudden hailstorm sweeps Kärnten, the Längsee valley is more likely to just experience heavy rain.

Of course it doesn’t always work like this. Disaster struck in autumn 2016, leaving Marcus and Uta with a grape harvest of exactly zero. Not ones to be deterred by a setback of this sort, they turned to Kärnten’s fruit orchards and came up with ‘Höpfel’, a hopped apple cider, and ‘Speckbirnenschaumwein’ – or, in English, ‘bacon pear sparkling wine’. Confused? The explanation that the bacon pear is so named because its shiny skin looks like it has been smeared with bacon fat didn’t really help us much. But what we can say is that this delicate sparkler has an incredibly smoky note, both in the nose and on the palate. It’s a delicious contrast to the fruitiness of the wine and makes this accidental creation an outstandingly unusual aperitif.

Although their flagship wines are Pinot Noir and Chardonnay, when the vintage allows for it around one-third of Georgium’s total wine production is sparkling. These are ‘real’ sparkling wines – the grapes are harvested at the same time as the others rather than in a pre-selection. Instead of using yeast (which they tried one time), the sparkling wines are made by mixing wines from older vintages with the fresh one, both in fresh and fermenting form. This natural fermentation process and hand riddling result in a cloudy, pinkish-yellow, not overly sparkling wine – not what you’d expect from your regular bottle of bubbles.

Georgium concentrates on burgundy varietals: Chardonnay, Pinot Noir and Pinot Blanc. The reason? According to Marcus, these varietals are especially good at expressing terroir and are constantly changing in character. For this wine estate, the earth on which the vines grow is of the utmost importance – far more crucial than the vines themselves or anything that goes on in the cellar. Giving life and energy to the ground is the whole aim of the game. It follows that the wines should be capable of expressing the earth from which they came.

And they are, actually, extremely expressive. Not in a loud and proud way but reserved, secretive – the kind of wine that takes a lot of time to get to know. Marcus and Uta find that their wines can be left open for at least a week and, in fact, are often better for it. If you have the time and patience, it’s probably the best way you could get to know Georgium wines: a little every day, watching how they and your attitude towards them changes. Though they might not be easy to describe, it’s clear to see how much thought and passion has gone into their making. Marcus Gruze – philosopher and rebel from one of the world’s least-known wine regions – is definitely one to watch