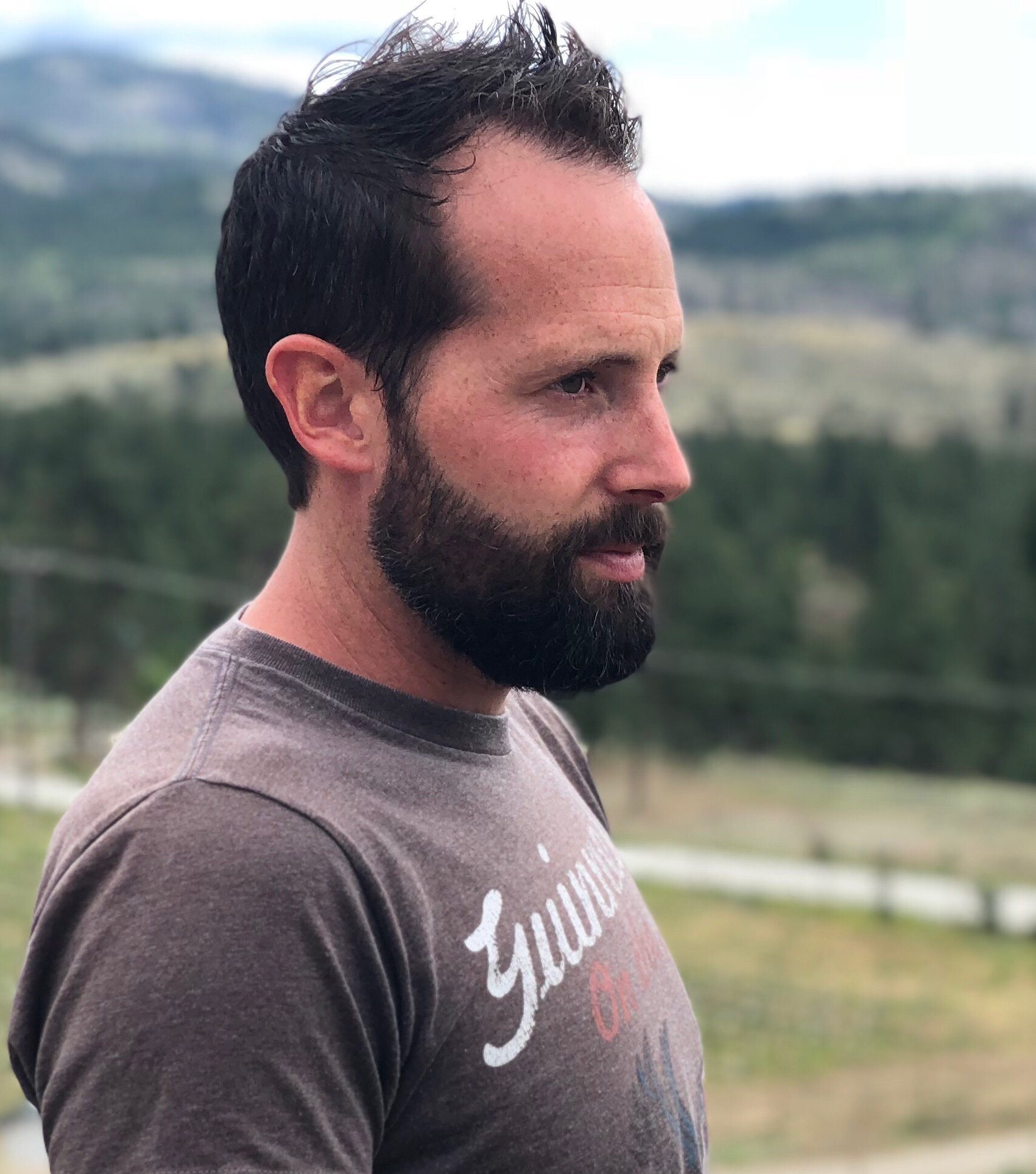 As I head out the door on a sunny afternoon in June, rushing to my meeting with Alan Dickinson of Synchromesh Wines, I hesitate and double back for my running shoes.  Even though most of my other winery visits thus far in BC hadn’t included a vineyard tour, I had a sneaking suspicion that meeting up with Alan was going to be anything but standard.

Within minutes of arriving, Alan looked askance and my waifish sandals and over-sized handbag, asking me if I was ready for a hike. And boy, was I thankful for that spare pair of shoes.

After a quick footwear swap, we set off on a tour of Alan’s 100-plus acre site, the vineyard dog, Clive (a fluffy Commodore), bounding ahead of us. As we made our way up a sloping track into a set of small hills, Alan described the various vineyards on the property and nearby, easily articulating which soil types lie in each roll of the earth and what they bring to the different grape varietals — granite does well for Cabernet Franc, it also brings texture and minerality to Riesling. Alan also knows the history of the land: once part of a mining operation, then zoned for movie productions, and finally laying fallow for several decades. Meandering comfortably, he points out the various animals that call his property home: the baby quail, just hatched and darting between bushes like feathered bullets; the herd of bighorn sheep that have escaped the plight of ear worm affecting other populations nearby; the pregnant doe that he sees on a daily basis.

As we touch, smell, and feel our way through the first part of Alan’s property, his abiding love of the land shines through. It is evident that he is, first and foremost, a farmer.

But as a native of my own city neighbourhood (Dunbar-Point Grey in Vancouver), I ask Alan how it was that he came to develop such a passion for this region and for farming and winemaking in general. “I dunno, I guess my first ever Halloween costume when I was a kid was a farmer — pitchfork and overalls,” he says with a wry smile. Continuing in his careful, quiet way of speaking, Alan elaborates:

“But, it’s wine — [my passion for the land] comes from wine. Respect and stewardship of the land allows it to showcase your wines more. The more you manipulate and influence it, the less a site exists in the wines, and you can taste it. Working in the trade [in Vancouver] I fell in love with certain wines and certain producers that shared this philosophy, and that’s what drove the desire to do this project.”

Backed by his strong sense of purpose to produce natural, site-specific wines, Alan and his wife Amy purchased their original five-acre plot of land in 2010, financing the project with the help of friends and family, and through offering custom crush facilities and start-up support to other local wineries. Originally named Alto Wine Group, the operation was renamed Synchromesh in 2012 when the winemaking itself took over as the primary function of the business. ‘Synchromesh’ is both a nod to the harmony between holistic farming and winemaking, and to the entire Dickinson family’s long-standing love affair with motorsports. John, Alan’s father, once raced and restored MG sports cars — something which Alan is already planning to do with his young son, Nigel.

Just last year, Alan wrapped up the crush facility and consultancy services in order to focus solely on his own products, specifically to acquire additional acreage and to consolidate his existing portfolio of wines. Akin to other natural winemakers in the region, Alan advocates focusing on a small, succinct portfolio, especially for wineries hoping to make the tough jump to international sales:

“Everyone tries to grow and produce everything [in North America] and there’s no specialisation…the wineries that are doing well, not just domestically but actually internationally, are focused. Because, like, if you go with a message of: here’s ten different skus of every fucking thing under the sun, to the UK — they don’t give a shit. And we’re actually in [the UK] this year, but we’ve had demand there for a number of years, that’s because ‘Riesling, Riesling, Riesling’ is the message.”

As we discuss the ins and outs of making the break abroad with his flagship varietal, it’s apparent that Alan’s uniquely deft understanding of both the commercial and the artistic elements of his enterprise has been the secret to his success. “The point is to try and express the [vineyard] site, and that’s really what natural wine should be about — what is the best way to capture this in a product that shows it to people, but also [that] consumers feel safe buying.” And, ultimately, Alan says: “the wine has to be good first, and then your philosophy matters. If the wine sucks it doesn’t matter if it’s cool or what method you used — it sucks!”

Having made a quick detour to check out a defunct mining pit-turned-swimming hole at the back of his property, Alan and I slowly made our sloping way back down towards the parking lot and tasting room. As we meandered through the tall grass, warmed by the late afternoon sun, we got down to brass tacks about the future of Synchromesh.

“I would love to get this dialled in to the point where we’re ticking over and doing well, making enough money that we’re happy with it, and then I can dabble in some other stuff. I love business, I love creating and developing things — like if we could do some angel investment at some point, that would be great. But I’ll always be doing this — farming; it’s what drives me on. And at the end of the day we didn’t move up here so that I’d end up sitting in an office all day. So the scale of this will never really change that much from where we are right now.”

Currently, Alan has about twelve different wines in his range, but focuses only on three key varietals. This features (of course) several different Rieslings, ranging from an entry-level non-aged blend right through to aged, vineyard-specific wines. There’s also a smaller selection of Cabernet Francs (as both reds and rosés), and a couple of Pinot Noirs. After our walk, we tasted through two Rieslings and two Pinot Noirs.

Alan’s Riesling doesn’t disappoint. The two we tasted were from 2014 and 2017, respectively, both grown in the family’s flagship Storm Haven vineyard. All of the tart and fresh fruit flavours you’d expect to find are there — Meyer lemon, juicy apricots — but balanced with a calming element of beeswax and minerality. As a young wine, Alan’s Riesling demonstrates a masterfully integrated texture, with a seamless balance between sugar and acid. The wine explodes in your mouth but seems to finish dry, despite having a residual sugar level of up to 62 grams per litre. “People think that they want dry Riesling,” Alan explains, “but they don’t understand that it’s about balance. Like some of our wines present as dry wines, even though they’re carrying a ton of residual sugar, and it’s just because we have huge acid here — so why not utilise that to create texture and balance and structure?” With age, the Riesling shows all of the same fruit, sugar, and acidity, but with additional, nutty, caky, and immaculately subtle and integrated petrol notes that die-hard fans of the varietal search for. It’s no wonder that the 2014 is one of renowned wine-writer Jamie Goode’s highest-rated Canadian wines — ever.

Moving over to the Pinot Noirs, we tasted a 2012 and a 2016 from two separate vineyards.The former, from Palo Solara, near Kelowna, and the latter again from Storm Haven. As we swirled and sipped, a debate raged about the quality of BC Pinot Noir. “The general rule in BC is that the oak is overbearing,” Mike, the cellar hand, sole employee, and part-time poet says with finality. But Alan’s Pinot has no hint of overblown North American vinification. Instead, the 2012 is floral and delicate on the nose, showing ripe and mellow red fruits like cherries and plums, with a good whiff of tobacco and an enticing pale colour close to the best wines from Volnay. A whole-cluster ferment with significant amounts of new oak, you’d expect it to be punchy — but this comes through only after several hours of being open, developing a more intense, masculine structure with oxidation. The 2016 is also a 100 per cent whole-bunch ferment, with 100 per cent new oak for maturation, but shows as bright and fruity, with hints of liquorice and anise, and a good level of acidity. Alan has managed to create near-perfect Burgundian reds — in Canada. Except that these wines have a uniqueness that sets them apart, that shows their terroir. They’re a bit grippier than a southern Côte D’Or, a bit more acidic, too.

Earlier that week, I had also sampled (quite a lot of) Alan’s extremely crushable Cabernet Franc rosé. With fruit that comes from a vineyard closer to the small town of Oliver, further south, this pale, salmon-coloured wine has a vibrant, unique nose of mint, melon, and green strawberries. On the palate it’s even more exciting: yeast, bread, strawberry, honey, and cantaloupe — like a perfect summer’s breakfast. The wine is balanced and has length is spades, which, with its unique taste profile, makes it king amongst rosés.

For those looking to try Alan’s delectable vino, the best bet is to buy early in the season, as he sold out the very day I came to taste. In fact, as I drove away (back in my sandals), I had a near miss with his chalkboard sign reading “SOLD OUT THANKS FOR YOUR SUPPORT.”

Abroad, Alan has had some interest from retailers in Australia and Asia, but The Good Wine Shop, in Chiswick (London), is currently the only foreign stockist (the Synchromesh family having decided to pull out of the US market for political reasons). With interest abroad as well as inter-provincially in Canada, Alan’s next challenge is to figure out how to extend the winery’s growth to these regions without stretching their product at home too thin, especially as his avid wine club following grows.

With limited availability and his wines in high demand, you’re lucky if you can scoop a few bottles before he sells out for the season. But if you do get your hands on a bottle or two, I promise that all you’ll be able to think about afterwards is Riesling, Riesling, Riesling.