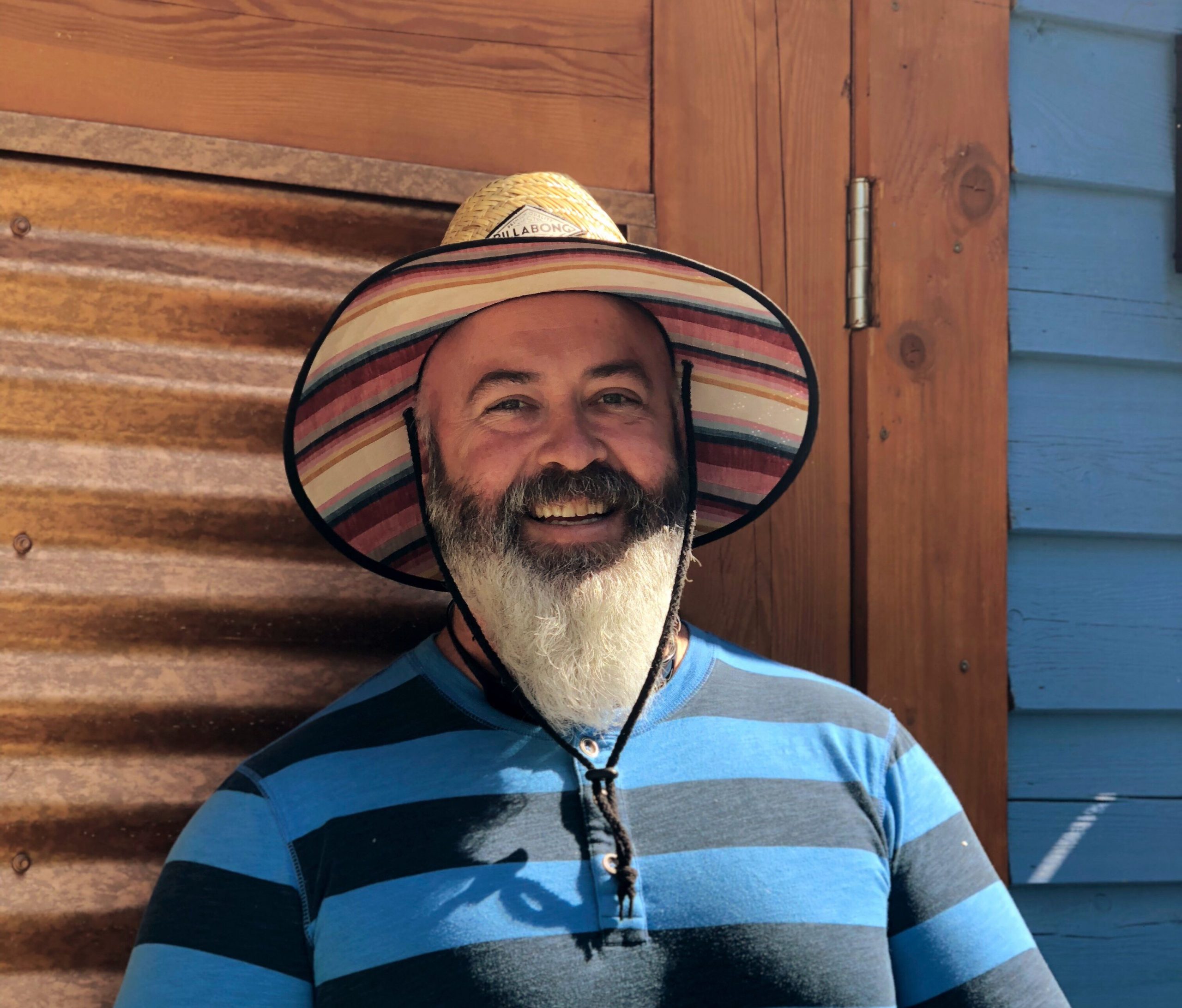 Becoming a Vintner: My 1st Harvest

Marcus Ansems is a Master of Wine.

He’s the fifth person in Canada to hold this distinguished qualification, and he has a wealth of experience to back it up: first developing his oenological skills in his family’s vineyard in Australia, then studying wine science at Adelaide University, and finally training under notable winemakers around the world, before opening his very own Daydreamer Wines (the culmination of a lifelong ‘daydream’), on the Naramata Bench in BC. 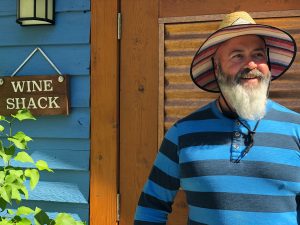 This is because Marcus Ansems is no stuffy great master, pontificating from on high. No, Marcus Ansems is a wild child of wine, even if he has the sort of noteworthy pedigree to make Steven Spurrier quake in his boots. It is precisely this combination of lauded education and experience, with a hefty dose of ‘hang loose’ attitude, that makes Marcus the Neo-Garagiste of Naramata.

For those unfamiliar with the term, ‘garagiste’ was coined in the 1990s in Bordeaux, in reference to a group of winemakers who were, quite literally, making wine out of their garages, in a style that was in defiance of the traditionally long-ageing Bordeaux wines. Instead their wines were fruity, young, and international in style, and known as ‘vins de garage’. These wines came “from previously unknown estates without proven track record or pedigree,” and were “characterised as winemakers’ wine, whose attributes [reflected] a disregard for the traditional handling of its particular terroir.”[1]

In Marcus’ case, he is also, quite literally, making wine out of his garage. “Right now, the crush pad is the basketball court,” assistant winemaker Kurt commented, when I visited for a tasting in June.  At the time, Marcus was in the process of building a new facility to organise all of his winemaking activities under one roof (in time for Harvest 2018), but still — the winery has been operating since 2016 out of a small, blue shack overlooking the vineyards and Naramata Lake (the shack also doubles as a tasting room during the day, complete with a surfboard on the wall and a set of Bocce balls waiting in the corner). Prior to this move, Marcus and his wife Rachel (who is equally co-owner-and-dreamer, as well as a passionate wine photographer and professional) worked in leased facilities from the winery’s launch in 2013, through the 2015 season. 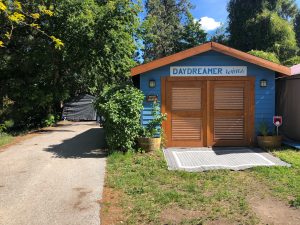 But it’s not just Marcus’ aesthetic that makes him a garagiste. In defiance of the ‘business as usual’ approach to winemaking in the region, Marcus is part of a small group of Okanagan vintners who are changing the way that wine is done in BC. Primarily, this means farming organically and biodynamically, and fermenting their wine with wild yeasts. It’s an approach that Marcus learned from his uncle at their winery in the Grampians in Victoria, Australia, which was one of the first vineyards in the country to farm biodynamically.

“We had a pretty conventionally run vineyard. My uncle was the winemaker and he was very interested in viticulture, and the fundamental crux for changing the vineyard over to organic and biodynamic was that the vineyard was old and it was just starting to not produce decent yields. It was that decision of whether we want this beautiful old vine fruit or whether we want to try and get [the vineyard] back to health. The viticulturist at the time, Damien Sheehan, said: ‘why don’t we try this’, and we tried it, and we found that the vine health improved, the yields stabilised, and it was just a positive thing all around.”

On Marcus’ eight-acre property (only five-and-a-half acres of which are currently planted), and at the external vineyards from which he sources, all of the fruit is either certified organic or biodynamic, or the methods are practised even without formal certification. In addition, all of Marcus’ wines are fermented naturally, except for one temperamental Riesling (which needs to ferment at extremely cool temperatures to preserve its delicate aromatics, and is therefore unfriendly to wild yeasts).

It’s not just Marcus’ winemaking style that differs to other vintners in the area. He also takes a critical approach to the tightening of appellation and sub-appellations, which he sees as unnecessary or even counter-productive in the pursuit of encouraging top-notch winemaking in the region:

“You know, I don’t think I’d like to see a model where the region is told what they should be growing in each of the sub-regions. I think that that’s sometimes counter-productive. But I believe the market will out. Like if the wine is good, the truth will out. So eventually people will buy the wines because people aren’t stupid and they’ve got friends and they’ll tell their friends, who will buy the wine, and the winery will do better. I think generally that’s the way it works, if you believe in that sort of market model.”

And in market models, he most certainly does believe. Marcus does not disregard commercial and economic factors to his detriment — he doesn’t practice natural winemaking to a fault. And this is where his prefix ‘neo’ comes in: Marcus is a pragmatist who practices what he preaches, but who also realises how to operate within the market and within the traditional structures of the local winemaking industry as it currently stands.

“For me, the only way I think the Okanagan will become successful is if it concentrates on small batch production. Or, you know, if it’s not small batch, it’s higher price-point production. Because the reality is we only have a very small amount of land in the Okanagan — 10,000-odd hectares (or potential) and that’s it…[we’re] not growing any more land, and the price of land is not going down, and so, in order for people to get a reasonable return on their investment the price of the wine goes up. And the only way the price of the wine goes up, is if the quality of the wine goes up. And if there’s the demand for it. So that’s, for me, the only real future of the industry: is that these wines have to be great.”

Moreover, Marcus acknowledges and indeed, engages, with, the debate about what ‘natural’ wine actually is:

“Fundamentally for me, winemaking is interventionist. If we’re gonna be completely altruistic about it, we’d leave the fruit on the vine, on the ground, and wait until some berries started fermenting, and suck them off the bunch. So just by growing them you’re intervening, just by trellising them you’re intervening, just by harvesting them — you’re intervening. So you know that whole idea of ‘I’m totally hands off’ it doesn’t really…it doesn’t strike a lot of logic for me. But that being said, all the winemakers that are interested in this have their own marks, and their own boundaries. For some people it’s ‘I don’t add yeast’ for some people it’s ‘I just use organic fruit’. For us it’s, at the end of the day, I want the wine to taste like wine — and I want it to taste good.”

The proof is in the pudding, as they say, and Marcus’ pudding is as proof-y as it gets. I tasted through his entire range of wines, which includes both his house-labelled Daydreamer Wines, and his reserve wines labelled with his family crest and name. The Daydreamer range is Marcus’ standard range, produced more or less year-on-year, and is a mix of international styles such as Riesling, Pinot Noir, Syrah, Merlot, and Cabernet Sauvignon. Whereas Marcus’ reserve wines are primarily Syrah (including a sparkling), Chardonnay, and Viognier, and are produced only from exceptional fruit in exceptional vintages. 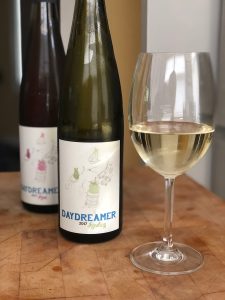 Despite the well-deserved acclaim for his eponymous labels, my two favourites were Marcus’ Riesling and his rosé, both from the 2017 Daydreamer label. These were punchy and beyond the norm. Whilst his reserve wines were elegant, powerful, and could last for years to come, I appreciated the quirkiness and vitality in the Riesling and rosé.

On the nose, the Riesling smelled of green apple, pear, nectarine, and lemon juice, with just the tiniest hint of petrol. The palate followed, but was notably juicy and crushable, and not done in the overly dry style that so many winemakers in BC seem to favour (with the exception of likeminded vintners such as Alan Dickinson). Marcus’ rosé, which is a blend of Pinot Noir, Syrah, and Merlot, packs an incredible punch at 14% ABV. And the nose does too: white pepper, stewed fruits, butterscotch, and strawberry. The palate is an even further explosion of stewed fruits, bringing to mind marmalade, grapefruit zest, and (of course) strawberry, but with an uplifting hit of lemon juice. You’d think this wine would be too boozy to enjoy, but the alcohol is well-balanced with the fruit, and the powerful flavours and aromas make for an interesting departure from so much of the watery rosé that is available on the market.

Notwithstanding all of Marcus’ experience, education, and critical acclaim, he is surprisingly self-effacing and down-to-earth (perhaps due to a regular regimen of Bocce paired with several glasses of his rosé). When asked about his MW qualification and the implied responsibility to the winemaking community that it entails, Marcus says:

“I’m not sure, to be honest, that I would be making wine any differently or doing anything any differently if I hadn’t passed the MW. The fact that the MW does garner a little bit more attention, I think that that’s definitely a positive thing. Do I feel responsibility? I feel responsibility for just running a winery and a business generally. I’m not sure if it’s extra. If anything [the MW] just gives me a little bit more latitude and flexibility and maybe makes people think if I do something crazy, maybe it’s not that crazy. Maybe people will just give me the benefit of the doubt that I actually know what I’m doing.”

Moreover, Marcus places a huge amount of emphasis on the tutelage he received from those who came before him, as well as the limits of his own knowledge:

“I had some really good role models at Adelaide University, very smart men like Patrick Ireland and Peter Dry…[And] I think one thing that maybe European winemakers are better at than new world winemakers is to step back a little bit and not to be so controlling. And that’s really something that I’ve learnt as I’ve got older. And it’s the hardest thing to do, particularly if you have a science background (which I do) is to say: ‘ok, maybe I don’t know everything. Maybe I’ve just got to let this thing do what it wants to do and express itself.’”

Marcus’ combination of reverence for the old masters, for the market, and for the realities of winemaking, combined with his focus on craftsmanship and small-batch laissez-faire gives him a unique outlook amongst his peers on the Naramata Bench. And though he may have recently moved into his new winemaking facility, I have a feeling Marcus’ attitude (and, more importantly, his wines) will continue to stand-out as stoically Neo-Garagiste.