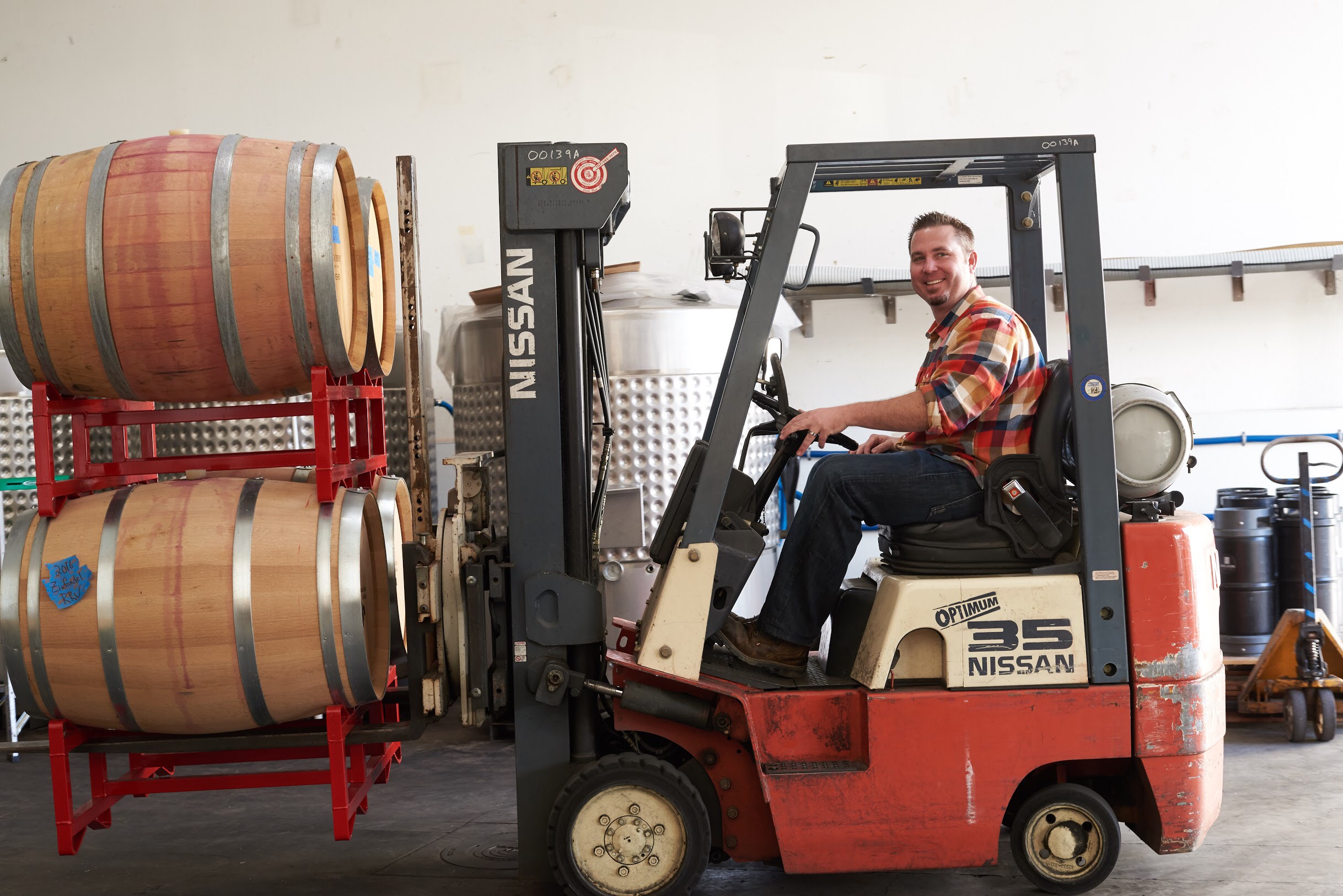 An Inside Look at Pence Vineyards and Winery

Starting a premium winery in California is a dream romanticized by many. But in reality, unless you have deep pockets, or your family has been making wine in Napa or Sonoma for decades, it’s a nearly impossible dream.

However, that didn’t deter Anthony Schroth, grower, winemaker and owner of Premonition Cellars from pursuing his dream of producing his own high-quality, handcrafted wines in Sonoma County. And once you get to know Anthony’s story, it starts to become clear why that’s the case.

Anthony has grit. From his formative years to present day, Anthony has not been deterred by the curve balls life has thrown his way. In fact, he’s knocked them out the park.

Not only is he a talented grower and winemaker but he is also a savvy businessman. He is resourceful, hardworking and humble. It is winemakers like Anthony that I enjoy promoting most on The Vintner Project. His wines are fantastic and can easily stand on their own but knowing the story behind the bottle just makes them that much more special. Learn more about Anthony’s story below, try his wines for yourself and I’m sure you’ll agree.

TVP: Where did you grow up?

ANTHONY: I was born in San Diego but my family moved to Jackson Hole, Wyoming when I was 10. We lived on an 18-acre parcel and raised horses, cows, sheep, and chickens.

TVP: Did you always want to become a winemaker?

ANTHONY: Growing up, I was really into sports. I played baseball, hockey, football, soccer and dreamed of playing in the pros. When it came time to go to college, I was recruited to Sonoma State University to play baseball. At the time, I didn’t know anything about wine and didn’t even know there were vines growing in Sonoma until I arrived. I was focused on baseball and that potential career path.

TVP: How did you get into wine?

ANTHONY: While in college, I ended up getting injured a lot and things just weren’t working out with my baseball career. I was supposed to graduate in 2005 with a degree in marketing but unfortunately two of the few courses I needed to graduate were only offered at the exact same time on the same day. This forced me to look at other concentrations. Sonoma state has an amazing wine business program and I noticed they overlapped well with my marketing concertation so I decided to give wine a shot. I took a wine 101 course and completed an internship in the fall of 2005 at O’Brien family winery in Napa Valley – a small family owned winery. It was very hands on and I got to wear a lot of different hats. I was working crazy hours but was so energized every morning. I couldn’t wait to get out to the vineyard. It soon became pretty clear to me that this was what I wanted to do.

TVP: How did Premonition Cellars come to be?

ANTHONY: My big break came in 2007 when a gentleman came into the winery I was working at trying to sell his Pinot Noir fruit. At that time, the winemaker I was working for wasn’t taking on any more fruit. I had been playing around in my garage and making wine and he suggested that the gentleman chat with me. I went and took a look at the vineyard and it was in not the best shape. I told him I’d buy the fruit that year but what I really wanted to do was come out and help him farm the land and perhaps come up with a deal for the following year. He agreed and I went out there nearly every day. I was there after work and on my days off and did all the pruning, leaf pulling, ran extra irrigation, fixed his canopy wires – I did it all. He was so happy he gave me the fruit for my labor that year. In hindsight, he probably got the better deal but I was only a year or two out of school and had a lot of time but not a lot of money.

Now that I had the grapes, I had to figure out how to make wine without spending any money. I ended up trading extra hours at the winery to use some of the equipment on the crush pad. This was how I was able to make my first couple of commercial barrels.

After working that vineyard for a couple years. I realized I had a bit of a niche and an opportunity to grow my business. There are a lot of small vineyards in Sonoma County (one to two acres) and if the home owners aren’t doing the farming, it becomes really expensive for them to bring in vineyard management companies. In certain instances, they’re losing money. I come in and do all the farming and then I trade the owners wine and money at the end of the year based on the tonnage I get out of the vineyard. I am now managing a total of 9 different vineyards across Sonoma and keep all the fruit I grow.

ANTHONY: We like to joke around and say our Chardonnay/Gewürztraminerblend is the best in the world because according to google, we’re the only ones doing it. It’s got the richness and mouthfeel of the chardonnay and the beautiful floral, spicy aromatics of the Gewürztraminer. They dance off each other in the glass. I try to find that balance where you can smell both varietals and the aromatics just waft back and forth. One of the vineyards I farm has 8 rows of chardonnay and 4 short rows of Gewürztraminer. At first, I scratched my head wondered – what the hell am I going to do with this Gewürztraminer? I chose to have some fun with it and do something completely different. I decided to blend it with my Chardonnay and that’s how Chard-O-Miner was born. I only make one barrel of it each year and its consistently one of my most popular wines.

ANTHONY: We just pressed off our 2018 Pinot Noir and its absolutely fantastic. It was a great year for Pinot Noir. We picked two weeks later than we’ve ever picked before. We had a relatively cool summer that allowed the fruit to have that extended hang time but also maintain a lot of that natural acidity. When the fruit came in, we really didn’t need to do much. Just stayed out of the fruit’s way. We let the native fermentation start and then once it got going, we added in our selected yeast. We’re in barrel and it’s looking like a block buster year.

ANTHONY: Dylon Sheldon of at Sheldon Winesin Santa Rosa is one. He’s got a nice elegant, easy hand approach. He does really obscure varietals and does them well. Another winemaker I have a lot of respect for is Michael Scholz, Vice President Winemaking and Vineyards at St. Supery in Napa Valley. His knowledge is amazing and he makes some incredible wines.

TVP: What advice would you give to the younger Anthony just embarking on his first commercial vintage with Premonition Cellars?

ANTHONY: DON’T DO IT! Joking… I’d tell myself to stick with it. There’s ups and downs but you’re going to grow and learn so much year over year.

TVP: What would you say has been the biggest challenge for you in running a boutique winery?

ANTHONY: The biggest challenge is sales. The upfront investment is substantial and it takes a lot more work than people know to sell wine. Even if your wine is amazing, it’s always a challenge to get the word out and sell your wine as a smaller producer. It’s a constant grind and you have to get at it.