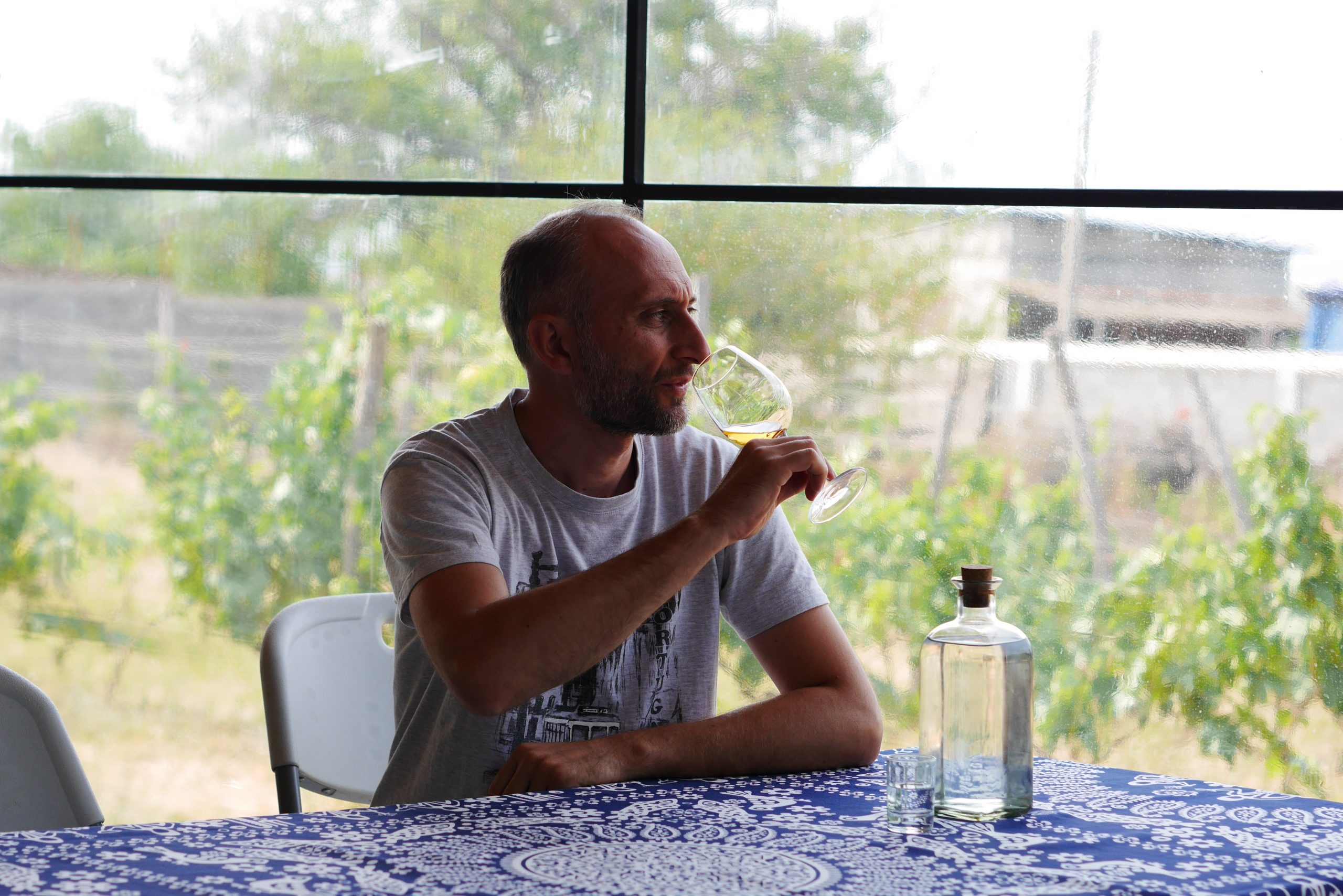 It is not often one can claim they are drinking a kind of wine they were making 8,000 ago, and yet this is pretty much what happens with certain Georgian wines, especially those made in a traditional homespun way. Most of them hint at the unique and colourful history of a country that claims to be the cradle of wine. Archaeologists are yet undecided whether wine’s birthplace was actually in Transcaucasia or southern Anatolia, but what is beyond doubt is that Georgia is the only country in the world where ancient winemaking methods have not only never been abandoned but remain in many ways best practice.

One of the true guardians of the tradition is Iago Bitarishvili from Iago’s Wine, and his path is one of going back to origins. Stemming from a family of winemakers, he started bottling his wines in 2003, determined to make wine in the true way of his region, Mtskheta. That meant stepping away from the predominance of technical mastery over raw materials that marked most part of the 20thcentury in Georgia. He was the first producer to gain organic certification in Georgia in 2005, a staunch advocate of qvevri winemaking and a driving force behind the New Wine Festival, featuring traditional wines.

I was introduced to Iago by Daria Kholodilina, a travel specialist, based in Georgia, co-author of the most comprehensive guide to Georgian wines in English language, ‘Georgia, a guide to the cradle of wine’. Arrangements were made and we agreed on a day and time for me to visit Iago at his cellar and his home near the town of Mtskheta, the old capital of Georgia.

Can you give us an overview of Iago’s Wine?

Iago’s Wine is a small family cellar where we try to make natural organic wine. We own 2 hectares of 60-year-old vineyards in the historical region of the Mukhrani Valley. The main grape variety I work with is Chinuri and it is made in the old traditional way, in clay vessels, known as qvevri in Georgia.

In this case all of the grapes with all stems, seeds, go into the clay jar. I use only indigenous yeast from the grape skins, which is why all vintages differ slightly. After the fermentation the qvevri is closed, and the solids start going down slowly – this is the process of natural filtration. Wines are aged in qvevri for about 4 to 6 months.  At the end of this process we obtain a completely clear wine. During these few months both colour and flavour change a lot due to the presence of solids – skins, stems and other elements – in wine. These remaining solids, the grape pomace, is the base for chacha, or Georgian grappa, the term ‘chacha’ meaning ‘pomace’.

It is the winemaking method, and not the qvevri themselves, that are recognized as UNESCO heritage. Grape-derived solids are equally important for producing quality wine. In Georgian we call them ‘mother’, and to ferment and age the wine in a qvevri without them would be to take away the child from a loving parent.

Yet, this is something that is being practiced around Georgia – fermenting and aging pure must in qvevri, without solids?

In Georgia there are over 500 indigenous grape varieties, and some of them certainly require destemming; especially, in Western Georgia where the grapes do not tend to ripen as well. In fact, about 5% of my wine is also made ‘without its mother’, but not more.  Leaving the wine in contact with skins and stems helps to stabilize it for transportation and makes it more resistant to changes in temperature.

You work almost exclusively with a grape named Chinuri – why did you choose it?

I did not choose Chinuri – one could say, it chose me, since these are our family traditions that I am continuing. That said, it does not mean I dislike the grape and feel like I am stuck with it.

It is the perfect variety for me, that allows making a lot of things – sparkling wines included. In fact, most Georgian sparkling wines are produced with Chinuri. Its high acidity and lighter body makes it a perfect candidate, although yields need to be controlled for better results.

All of your total 5,000-bottle production is exported. Where can we find Iago’s wines?

I started exporting my wines in 2006, and today one can find them in the United Kingdom, United States, Australia and even at traditionally very difficult to enter markets, such as France and Italy, who are main wine exporters themselves. They are featured both in top restaurants  (*London’s Ritz being among the latest one to surrender to Iago’s Wine magic, and natural wine bars in London or Paris. That, of course, responds to increased demand of organic and natural wines in those places.

Speaking about organic, in 2014 you decided to abandon organic certification. How would you explain your decision?

I am completely convinced that the natural way is not better just from the producer’s point of view, but also from the consumer. However, I just do not believe that current organic and even biodynamic certification practices completely reflect this ‘natural way’. When I see my wine certified as a ‘Bio-Wein’, say, in Germany, it sometimes shares a shelf with much bigger and industrially made wines that are far from being organically made.

Another setback of these certifications is their restrictiveness. I’ll give you an example. I have recently launched a small production of family beer and bottled beer. One of the requirements for it to be labelled as organic is to indicate the best before date, but with beer being a living organism, I can’t possible know how long it will last.

Generally, I do not believe one should go through organic or biodynamic certification process purely out of business reasons. Those who do will abandon it in the early stages, since this is certainly not an easy path. I have now decided to take a step away from it and continue making wine in the same respectful way, but I might go back to certification in the future.

I am also not a biggest fan of a term ‘natural wine’, and believe that ‘minimum or low intervention wine’ reflects my personal philosophy much better.

And on the topic of wine terminology, could you shed some light on the terms ‘orange wine’ versus ‘amber wine’ applied to Georgian white qvevri-aged wines?

I really believe that ‘amber’ is a more accurate description of colour, and also is less confusing: in Georgian, as in some other languages, ‘orange wine’ can actually mean ‘wine made with or derived from oranges’. You just won’t see the term ‘orange wine’ on any Georgian wine label.

Tell us about your future challenges.

To talk about the future, it is important to remember a not so distant past. Back in 2009, when I decided to put together a tasting of traditional qvevri wines, I could barely find a handful of producers in this style, and this year, 10 years later, I received applications from over 425 Georgian winemakers.

Georgian drinking culture in general suffered major changes under the Soviet Union, to the point that even after its collapse, there were no wine bars in Tbilisi until 2008-2009. And look where we are now – witnessing a burgeoning wine scene in the capital, with a variety of wine events, wine bars, wine restaurants.

The challenge is certainly to advance this growing recognition of traditional, artisanal wines in Georgia, which is up to us as producers and consumers. The government is more interested in supporting big ‘wine factories’ than small-scale winemakers.

Another challenge is to work more closely with foreign talent – wine consultants, winemakers, and oenologists. In the past years we have seen a number of successful joint projects around Georgia, that are putting the country on the international wine scene and I believe this exchange is extremely important for our future. My neighbours Ori Marani are a good example – a perfect symbiosis of Champagne and Khartli!

We finished the visit to the cellar with a customary ‘Supra’, a true Georgian feast. Traditional Guda cheese, fresh fruit and delicious Lavash bread proved perfect companions to Iago’s Chinuri with 6-month skin contact: elegant,  yet powerful, with hints of orange rind, pear and walnuts. No Supra would have been complete without Chacha, of which there seemed to be an endless supply. A fantastic digéstif and a perfect finale to a day out with the  ever-inspiring Iago.