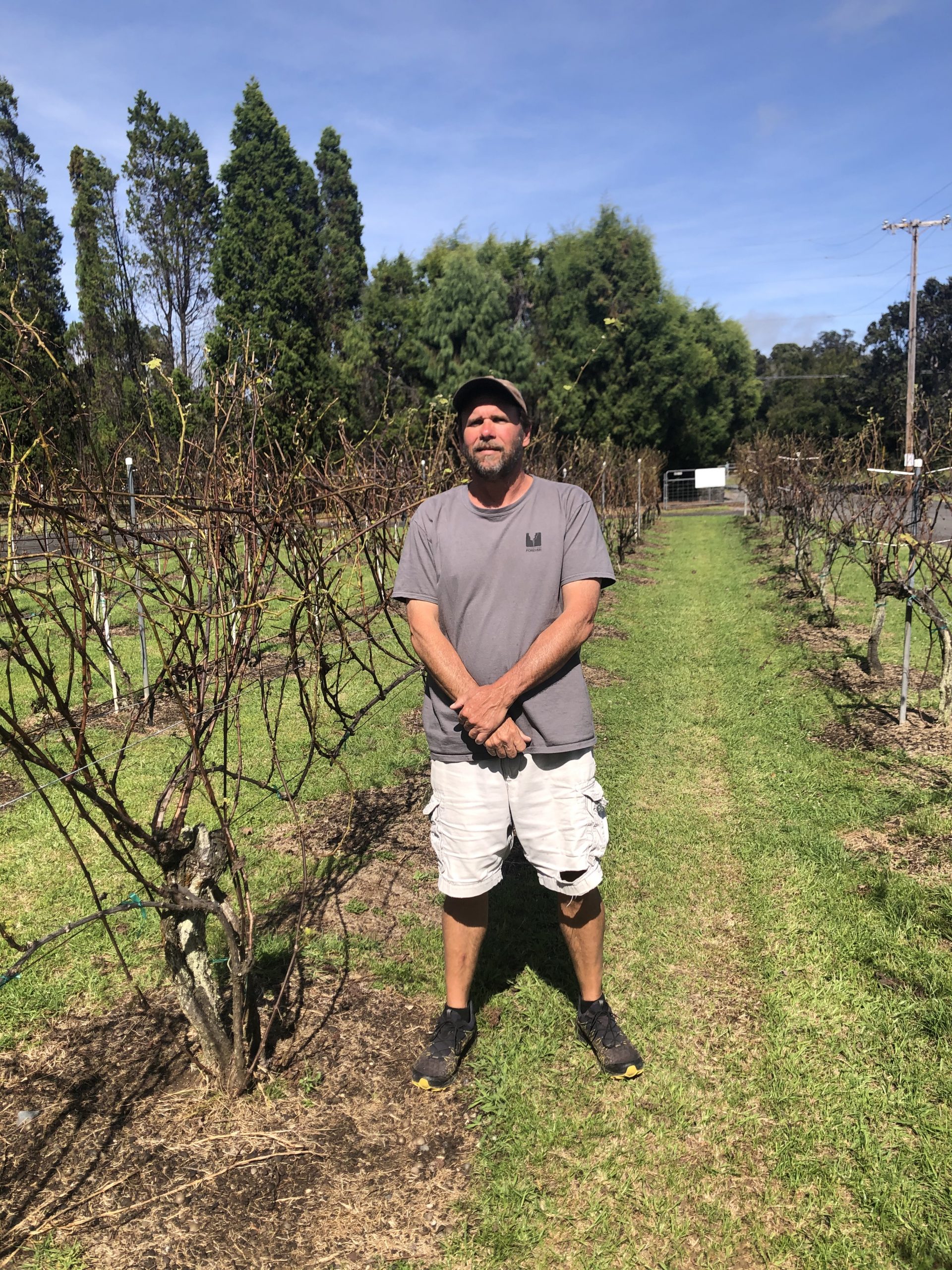 Self-taught Hawai’ian wine industry veteran Alex Wood has a knack for finding just the right spot in a vineyard where a varietal will flourish, and then carefully helping it reach its full potential. In the two decades he has been at Volcano Winery, becoming head winemaker in 2010, several in his care have received acclaim, including medaling at the prestigious Finger Lakes International Wine Competition.

One of the most intriguing Wood is responsible for introducing is Syrah; a varietal not often associated with what is assumed (incorrectly) to be only a tropical climate. As part of my series exploring Hawai’ian Syrah, I had the pleasure of interviewing Wood about his experience planting, the vineyard’s unique climate, and how its volcanic terroir is ultimately expressed in the wine.

Nate Goetz (NG): What is your background in winemaking?

Alex Wood (AW): After graduating with a BS in Agriculture from the University of Hawaii at Hilo in 1999 I was hired as Assistant Winemaker at the winery. After a year at that job the Vineyard Manager position opened up and I was hired to take over management of the vineyard. In 2010 the winemaker left and the owner approached me and asked if I would like to take over the winemaker position in addition to managing the vineyard. I still oversee the vineyard and wine making operations, I am currently the General Manager as well. Regarding wine making, I am self-taught. I have been interested in, and have studied wine, for 30 years and have continued my education through outreach to the many wine industry people I have met over the years.

NG: Tell me about Volcano Winery’s sense of place and how it is captured in its wines?

AW: I feel that the winery’s close proximity to Kīlauea caldera is a defining characteristic of the winery, but regarding how sense of place is captured in the wine we would want to look at our microclimate. The winery is located at a transition zone between wet and dry; a half mile to the east or the west and we would not be able to grow balanced, quality fruit. This special pocket we are in is reflected in the wine. We plant directly into lava which results in a basalt-based, very well drained substrate. With less than a foot of top soil, when planting we jack hammered with a large excavator into the lava rock, removed the broken up lava and filled the 2 foot by 2 foot trenches with amendments and soil mix that we prepared prior to planting. This direct interaction with the lava rock is a major component of our terroir.

NG: How did Syrah find its way to Volcano Winery?

AW: Before planting I talked with a lot of people in the industry about varieties that would be a good fit for our site and Syrah was suggested.  Normally you would not see Syrah grown in a cool climate site but the rationale was that because Syrah is a bold grape there is a certain amount of headroom and that we could see pretty good expression.  Also, where the Syrah is growing is a special place on the property and is quite a bit warmer than other areas.  I decided to give it a try and am pleased with the wine we are producing.  I only wish the area we grow Syrah was larger.

NG: Given the Big Island’s unique climate, what is the growing season like for Syrah and what have you have learned along the way?

AW: Because of our 4,000’ elevation, the growing season is similar to traditional grape growing regions. One major difference is we see bud burst spread out over time and this plays into managing the vineyard. This uneven bud burst of course carries into harvesting.  We see a small amount of fruit that is a bit under ripe and some that is over ripe. We try to find the sweet spot. Also, we do have a fair amount of disease pressure that requires very active canopy management. The vineyard crew does a great job keeping the fruit zone open. I have learned a lot about the importance of canopy management, training styles differences and wildlife control, specifically pigs and birds.

NG: What other important lessons have come out of the vineyard?

​AW: The importance of training and selection when pruning and how decisions made have such a strong impact on outcomes the following season. Also, learning about nutrition management and how that pertains to our site. The biggest lesson is that every season is different and that every year has its own personality and feel which ultimately is expressed in the wine.

Grown on less than an acre, the 2016 was the very first release of Volcano Winery’s Estate Syrah. Aromas of mint and fig. Flavors of mint, fig, basalt, plum, and dried cherries complimented by a tangy acidity and polished tannins. The only trouble is no more remains (I was fortunate for my visit coincided with the cork being pulled on the last bottle); however, future vintages are planned.