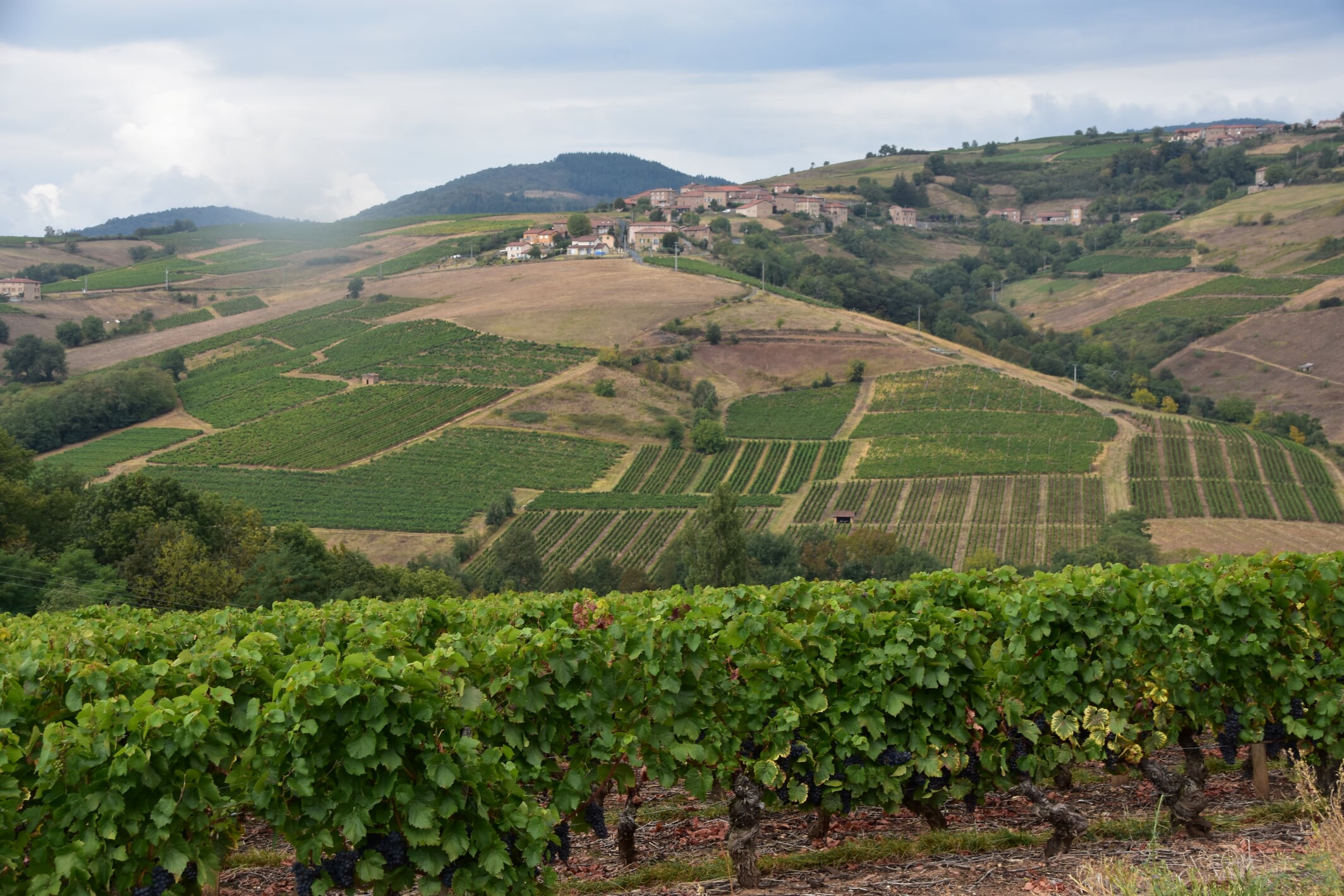 After a recent week-long trip to Beaujolais, I emerged with a radically different impression of the complexity and quality of the region’s wines and its largest producer. Simply put, Beaujolais wine represents a range of flavors, from fruit-forward and delicate to spicy, deeply rich and masculine. And visits with Georges Duboeuf, meanwhile, and some of his 400+ producers, convinced me that the man put Beaujolais on the map does so much more than slap labels (many of which he designs himself, by the way) on 2.5 million bottles a year.

But before delving further into specifics, let’s take a broad view of the region and its wines.

Beaujolais, located in mid (slightly South) Eastern France, includes 96 communes (or winemaking villages). Eight-five are in Rhone, 11 are in Saone-et-Loire. The vineyards cover 15,780 hectares in 60,000 plots. Put another way: vines are grown in area stretching along 55 km north-to-south, and 25 km east-to-west. All of the Beaujolais come from the region described above and are AOCs (Appellations d’ Origne Controlée). There are 12 appellations in the region, comprised of 96 villages with 2,893 estates. Ten of those 96 villages or communes are Cru. The average annual production in the region is 110 million bottles, 40% of which is exported to 120 countries.

Most of wines made in Beaujolais hail from the Southern portion of the region, where the terrain is flatter, and the soil is comprised largely of clay and sandstone. The soils vary significantly across the region though, and have a great impact on the overall flavor and character of the wines. The soil in the Northern half of the region harbors most of the Cru Beaujolais communes, and is comprised of granite, schist, limestone and clay. In Cru Beaujolais from the Northern region, the Gamay grape tends to produce more complex wines, and the manner in which the grapes are treated once plucked adds additional layers of refinement and perceptible flavors. These, unlike the light-bodied juicy Nouveau-style wines, Cru Beaujolais wines resemble Burgundies (at a lower price point).

Aging (Or Not) Beaujolais:

Traditional vinification in Beaujolais generally consists of putting whole bunches of grapes through the process of semi-carbonic maceration. The length of fermentation varies, depending on the type of wine the maker is creating. Nouveau wines, of course, are created to drink young. Picked this year in late August and early September, they undergo maceration and then get bottled, labeled and shipped to market by the 3rd Thursday in November. The rest generally get bottled in the spring after aging. Some winemakers allow their grapes to ferment in stainless steel, others in French oak, many use a combination. Some use cement tanks.

But what about Beaujolais wine made from the 10 Crus that dot the northern hills of the region? What happens to them when they’re aged 5, 10, even 25 years? Can they stand up to their Burgundian counterparts? In a word, yes.

While in Beaujolais, the winemakers at Juliénas Château des Capitans, Domaine des Rosiers, Domaine des Quatre Vents and Morgon Jean-Ernest Descombes were kind enough to open their doors in the midst of their harvest season and provide their quaffable evidence. Before tasting, they shared their personal ties to the vineyard (some of which date back to the French Revolution, like Morgon), let me peek into their tanks and check out some of their 80+ year-old-vines. Some of the wines are aged in oak, some fermented in cement tanks, others in stainless steel; all are made from the Gamay varietal.

Despite just being a grape’s throw away from each other, their wines were all completely different from winery to winery. For example, the Quatre Vents, grown in the pink graphitic soil of Fleurie, are floral, red-fruit forward, with spice, while the terroir of the Cru Morgon, produces wines with a more masculine edge, structure and deep ripe fruit flavors. But do they age well? Across the board yes, but especially the Morgon (the one from 1993 had lost its tannic edge, but miraculously maintained its red ripe fruit flavors. The Moulin-a-Vent Cru too (that’s the Domaine des Rosiers) had a 2009 that winemaker Gerard Charvet claimed could still use a few years in the cellar before it’s ready.

I was reminded once again that terroir can change not just from region to region and vineyard to vineyard, but vine to vine (one section in Fleurie produces cinnamon-flavored grapes). As Jean-Ernest Descombe’s owner Nicole Descombes explained, wine is a living, breathing thing that reacts, sometimes in surprising ways, to not just terroir, the weather and technique, but to the soul of the maker; even, she claims, the spirit or soul of the cellar.

What does George Dubouef have to do with all of this? Everything.

He was born in 1933 in the Pouilly-Fuissé appellation in Burgundy, near the village of Chaintré. Dubouef was raised on a farm, bearing a few acres of Chardonnay vines, and his family’s roots in winemaking date back four centuries. Sadly, his father died when he was a child, and though his uncle and older brother took over the business, he like everyone else in the family, was expected to pitch in. He’d pick, crush grapes, wander and dream. Grapes, the beauty of winemaking, the pleasure of working as a family, the beauty of the region itself imprinted on his brain.

When he was still just a child, he drew a model of what became the Museum of Wine that he opened as an adult. (It’s still there today).

But it’s doubtful that even Duboeuf could have pictured himself running a business empire that produces 2.5 million cases from 400+ producers per year.

It happened, slowly, almost, looking back, by accident. When he was still just a boy really, in his early 20s, he invented a bottling technique that allowed his family to bottle and sell their own finished wines directly to restaurants, instead of sending their juice to merchants who would finish the wines and market them under their own labels.

The influential importer Alexis Lichine was introduced to his wines through Bocuse and Blanc, and was just as thrilled by what he tasted. All three demanded more, plus reds. Duboeuf sparked at the challenge, and began cycling through the country, meeting with family winemakers, tasting their raw grapes and their finished wines, and initiating a series of relationships—most of which were never formalized with more than a handshake—that exist to this day.

Within a few short years, Duboeuf invented a crude mobile bottling line, began creating new bottles (he patented several) and grew the number of winemakers he worked with, bottled wines for and sold. By 1964, when he was 29, he had created a negociant business (Les Vins de Georges Duboeuf) devoted to the wines of Beaujolais. But it wasn’t until 1970 that the concept of Beaujolais Nouveau began to catch on in Paris. Trendy restaurants began advertising Nouveau wine, and a la the American farm-to-table craze in the early aughts, the movement took off. Duboeuf saw an opportunity to capitalize on the demand, and began creating bottles and labels solely devoted to the line, which he began exporting around the world.

There were serious ups—and downs—for Georges Duboeuf the man and the brand in the past half-century plus. But is there anyone quite like him, who at 85, is still out in the vineyards, touching the fresh grapes; bopping from cellar to cellar, tasting the slowly fermenting grapes; rushing back to the office to check on orders, talk to journalists, sketch out new bottle and label designs?

What would the region look like today without Duboeuf’s marketing acumen, vision and generous joie de vivre? It’s impossible to say with certainty, but as the winemakers I visited told me, they probably wouldn’t be there today without him. There would certainly be no Museum of Wine (La Hameau du Vin). There would be no Thanksgiving Nouveau.

And yet, instead of wearing his crown as King of Beaujolais with pride, he bears it with humility, and quite frankly, unabashed merriment. Watching him taste through 12 bottles of wine at his home with his son Franck (who is slowly but surely taking over much of the day-to-day operation of the company) and discuss the promise of this year’s harvest (very good, with just the right amount of rain and acres of sunshine; with early analysis of grapes showing a high sugar content—between 54 and 56 degrees Celsius—and a low acidity—between 4.7 and 5.5 g/l—and pH level hovering between 3.22 and 3.34, he says the 2018 will likely rival the 2015 in terms of quality and age-worthiness) as his vintage Calliope played in the background, was like watching Santa Claus reviewing the greatest hits from his elves. He was thrilled by what they’d created and even more delighted to be the person who was permitted to share their handiwork with the world at large.

Released on the third Thursday of November, the 100% Gamay Nouveau is always as fun, fresh and delightful as a Carousel ride. (I have not, of course, yet tried the 2018, but I can’t wait). Does one want to pair it with a three Michelin star meal while contemplating the existential questions in life? Probably not, but it goes perfectly with rowdy family dinners, laughter, love and fresh farm-to-table harvest fare. (Which, of course, is why it belongs on your Thanksgiving table).

Newly available in the U.S., this Merlot shines like a ruby and bears aromas of dark fruits. There are hints of oak and cocoa too. The tannic structure is present, but overbearing, as it so often is in wines in this price range ($11.99). The flower on the label is cornflower, which bloom in the fields of the Pays d’Oc. Drink this with roast lamb, or coq au vin.

I tried the 2017. It is produced with Chardonnay grapes, and is lovely and rich, layered flavors of pear and nectarine. A pinch of spice and crisp from its time in oak. This would pair perfectly with any sophisticated, but earthy repast. (Frogs legs with roasted brown butter).

The Descombes family has had Gamay vines in the Morgon appellation since the French Revolution, and their roots shine through in one spectacular vintage after another. While the thicket of tannins is dense, it’s balanced beautifully with ripe black berries. Pair with rich cheeses, or better yet, Gougeres.

Made from Gamay grapes, I have not yet tried the 2018 vintage, as it is set to launch in November. Made a la Nouveau in the first wine of harvest style, it will come from the growers who provide the grapes for Georges Dubeouf’s Nouveau. The team sought out grapes with a slightly higher acid content than the ones used in the Nouveau blend. Both the Nouveau and the Rose were created by Georges, Franck, their chief winemakers Emeric Gaucher and Denis Lapalu, by repeatedly tasting, blending, tasting again, reblending, tasting. More than 100 components (flavor, texture, etc.) are considered; each person tastes 300+ samples a day during the production process, for a total of 8,000+ samples before the final blend is arrived at. By October 10thevery year, the precise blend is arrived it.

And what are they going for? “Something aromatic, round, pleasant, fresh,” Franck summarizes. Sounds divine.