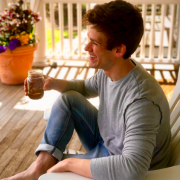 Two longtime friends were out on the open road. They bartered homemade ‘scorched’ absinthe in exchange for lodging and used the side of their van for movie projections under the stars. These were the beginnings of Standard Wormwood Distillery. Taras Hrabowsky and Sasha Selimotic, founders of Standard Wormwood, met in middle school, where they grew up together in Orange County in upstate New York. With combined educations in art animation and engineering, the pair never dreamed that their hobby of secretly distilling with a propane tank, a makeshift still, and an old milk kettle would eventually become a thriving Brooklyn-based operation. While they were distilling for fun, the then illegal-for-consumption wormwood that Hrabowsky grew on his upstate family farm eventually became a legal additive for beverages. Sasha went ahead and got the licensing to start the business and only shared this with Taras after completing it.

Excited and ready to dive in, the pair had already been experimenting beyond traditional absinthe recipes by cooking up a wormwood whiskey—stave-aged for six months before bottling—which is now a staple in their core line of spirits. As they transitioned from home-distillers into a professional operation, they realized they had already created makeshift solutions to real distilling techniques. They had been placing pipes filled with grain into different parts of the still to infuse the flavor, a homemade type of gin basket and standard tool used in adding botanicals to gin. While many associate wormwood with hallucinations or intense ‘highs,’ it is only a mild stimulant. It’s the abv itself that you’re experiencing the most.

The roughly four-foot silver wormwood plant supplied to the distillery from Taras’s upstate NY farm is naturally resilient to bugs and deer because of its bitter taste. It also has antimicrobial, antibacterial, and natural preservatives. An old method for ridding an infected person of worms was to take a hefty dose of the plant. The natural properties of the wormwood would cause the worms to want to leave the body!

Why use such a seemingly volatile plant in distillation? Wormwood, which is added post-fermentation and soaked in the first distillation before being distilled a second time, adds a terrific amount of complexity. While many classic cocktails call for a drop or two of bitters to finish a drink, Standard Wormwood considers themselves as almost a ‘bitters distillery,’ adding this nuanced bit of complexity into every drop. While absinthe has an intentionally bitter licorice flavor, the grand wormwood variety used in their recipes is intended to be a modifier or influence other flavors. “Not tasting it is the point,” says Taras.

For example, the wormwood in their whiskey allows for the flavor to build on your tongue, giving the natural spice of rye a perceived depth while highlighting the heavy char of the oak flavor. While this unique plant adds a bit of “good funk,” the pair now use a technique in their professional operation called thin mashing (adding corn sugar and grains) that allows them to control the extra flavors achieved during fermentation. In addition, the distillery no longer uses the homemade milk kettle still, but rather a unique modular-reflux hybrid pot/column still they call a “Frankenstein,” which can be modified in height for each type of spirit they are distilling to achieve specific flavors.

In addition to their experimental and seasonal offerings, their three flagship spirits include a rye, a gin, and an agave-based spirit. While the rye whiskey was their first experiment after homemade absinthe, the gin was the following product and adhered to a similar ‘bitters-distilling’ vapor-infusion process for this sipping gin. The agave (which is their unique variation of a tequila-type recipe with added corn) was the final addition to the mainstays, offering something entirely different while still incorporating the wormwood flavor during fermentation, a process the pair perfected with the rye whiskey.

By opening an exciting new space and tasting room in Industry City Brooklyn, their goal is to fully embrace and explore the limits of what Taras calls “full-spectrum distilling,” making new and seasonal styles. They are also launching a cocktail program featuring experimental twists on classics like ‘The Wolf,’ a wormwood Old-Fashioned that incorporates 50-50 ratios of their signature rye and their new amaro muddled with brown sugar, no additional bitters needed.

You can visit Standard Wormwood Distillery at their newly opened location at 68 34th St., Brooklyn, NY, sip a cocktail in the outdoor garden courtyard that incorporates local ingredients from their upstate farm, and pick up your favorite bottle to bring home. Tours are temporarily suspended with the hopes of relaunching in July in time for the launch of a new cane (rum) spirit. Current hours are Friday 4 to 11 pm, Saturday 1 pm to 12 am, and Sunday 1 to 8 pm, with more expected as the summer goes on. (Also available in select retailers in NY, California & NZ).