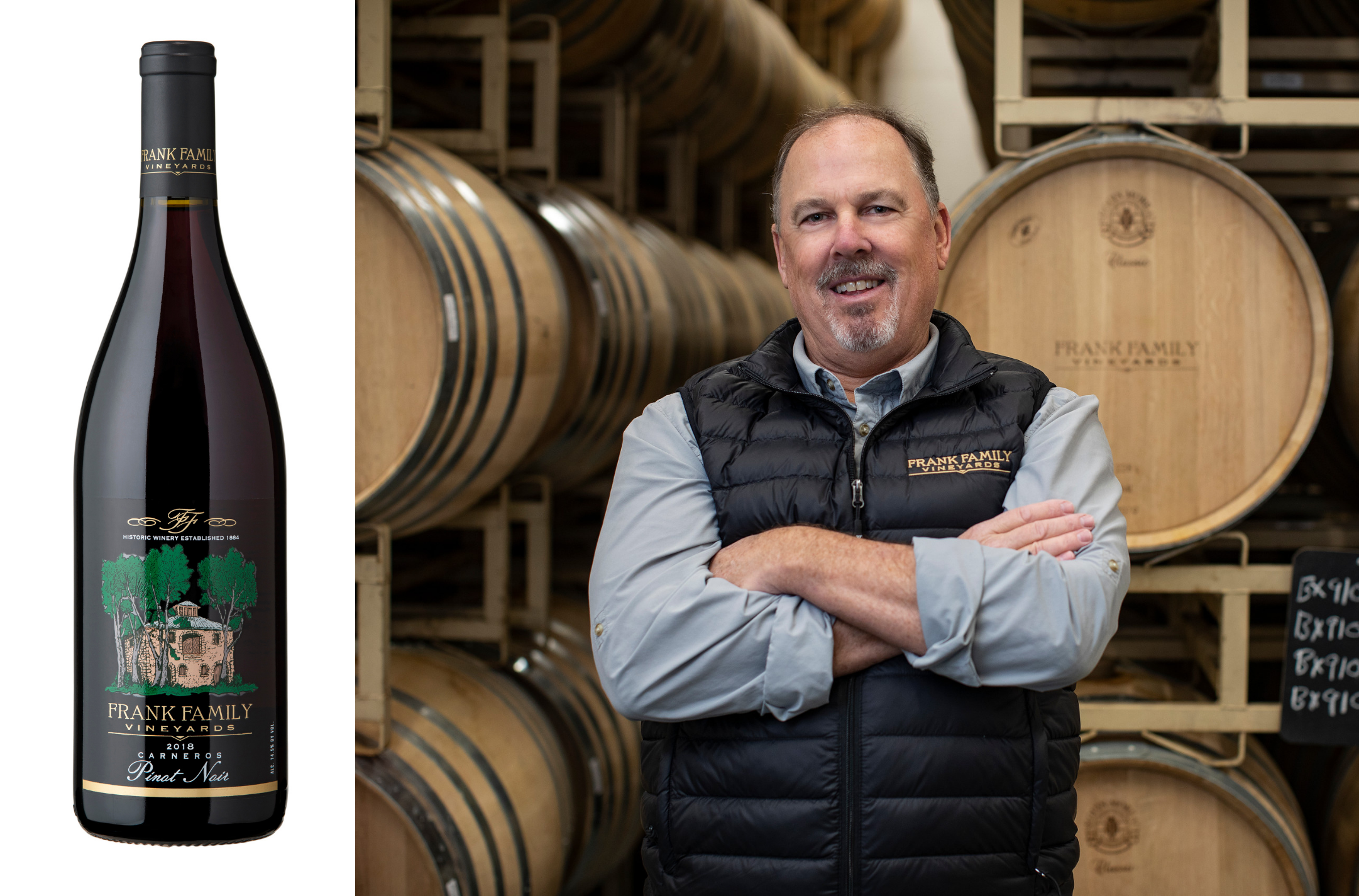 “We’re not trying to make a Burgundian Pinot Noir. We are blessed with California sunshine and we have to farm with that in mind. We’ve learned a lot from the French, and we respect the French, but we’re trying to do what California does best. We have an abundance of this great fruit, so we’re not going to hide it at all.”

The foundation for the Carneros Pinot Noir is the Sangiacomo Vineyards and Beckstoffer Vineyards, both located in the heart of Carneros, near the shores of the San Pablo Bay. The maritime influence of the Pacific Ocean creates the cool temperature, fog and wind that make the Carneros region ideally suited for growing cool climate varieties like Pinot Noir. Some estate Pinot Noir from Frank Family’s Lewis Vineyard is also selected to round out this appellation-designate wine. Lewis Vineyard consists primarily of shallow and dense clay loam soils, receiving only 20 inches of rainfall annually. The restricting soils result in extremely low yields, producing grapes with strong character and balanced acidity.

Winemaker and General Manager Todd Graff is behind Frank Family’s reputation as a world-class producer of Napa Valley Cabernet and Chardonnay and our Napa Green certification for both land and winery. Prior to joining the family in 2003, Todd’s career began across the globe, where he worked at the steep slate vineyards of Weingut Klaus Schweicher in Mosel, Germany, the sandy soils of Château Yon-Figeac in St.-Émilion, France, and the decomposed granite and sandstone loam soils of Arrowfield Estate in Australia’s Hunter Valley, among others.

Todd honed his craft and grew his technical skills throughout wineries in Napa Valley, including his time as Assistant Winemaker at Stag’s Leap Winery, as Assistant Winemaker and Vineyard Manager at Schramsberg Vineyards, as Sparkling Winemaker at Cordoniu in Napa (now Artesa), and as Winemaker at Sonoma Creek Winery. He is now a member of the Napa Valley Wine Technical Group and the Napa Valley Vineyard Technical Group. His forethought and intuition are his artistry, where a deeper understanding of flavor profiles sometimes feels like magic. His favorite part of the day is walking the vineyards in the morning with his dog Bristol by his side.

With 380 acres of the finest land in Napa Valley and one of the biggest word-of-mouth followings, Frank Family Vineyards has become a household name for lovers of premium Napa Valley Cabernet Sauvignon and Chardonnay. Having first opened its doors in July of 1993, Frank Family’s reputation for having the friendliest hospitality in Napa Valley has fans flocking to the tasting room on Larkmead Lane, making it one of the most popular tasting rooms in wine country. Add owners Rich and Leslie Frank and their day to day involvement with the winery, and winemaker Todd Graff’s winemaking prowess, it’s no question that Frank Family Vineyards has become a leading producer in the Napa Valley.

Winemaker Notes, About Todd Graff, and About Frank Family Vineyards sourced from frankfamilyvineyards.com.