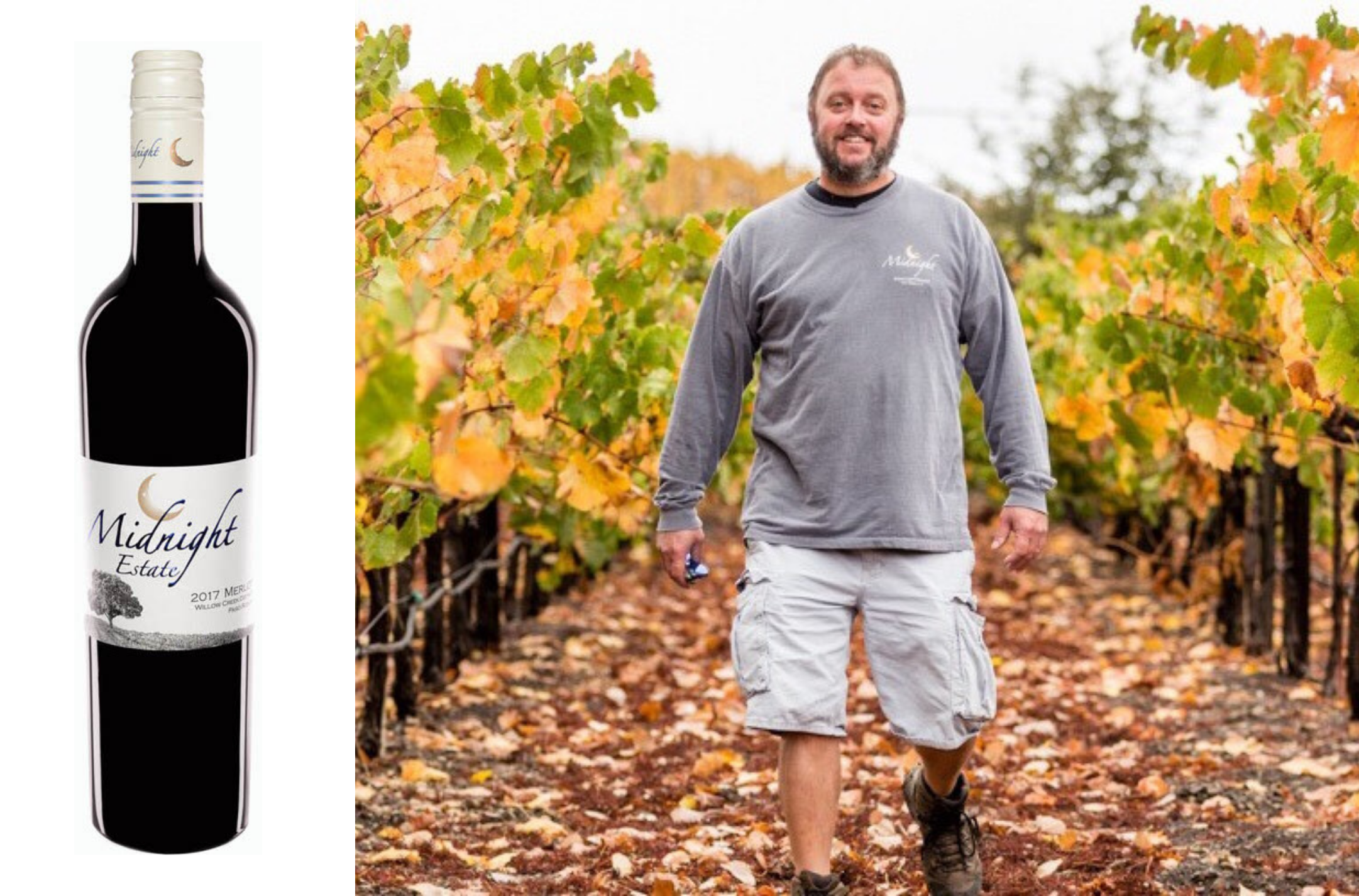 “The Midnight Cellars Estate Merlot has a dramatically eye-popping flavor profile. Grown entirely on our home vineyard, we crop to around 2 tons/acre and focus on maximum extraction, sometimes extending maceration up to 60 days! This full-figured beauty also ages extremely well. We are still drinking our ’97 Merlot and it’s tasty!”

The Midnight estate vineyard was planted in the spring of 1996.  Uncle Eugene was out visiting and his physical labor was of course enlisted.  He tirelessly and without too much complaint, helped button stake the Merlot district that now bears his name.  The Eugene District consists of eight acres and typically yields two tons per acre of very structured fruit.  The first Estate Merlot was produced in 2000 and is still showing well after 20 years. Extended maceration of up to 60 days lends itself to a very structured, age-worthy wine.

Midnight Cellars began as a slightly tipsy, laughing mention on the back patio at Domaine Carneros in the summer of 1993. Enjoying a family getaway to Napa and Sonoma, and after several winery visits, Rich is responsible for making the whimsical statement that would change their lives forever: “hey old man, when you retire you should buy a place like this and have us run it for you.”

Laughed at and forgotten, years later it became a possibility. Robert decided to retire early from his career as a patent attorney and was still full of energy and passion to begin a new venture. He amazingly remembered Rich’s idea and said to him “if you were serious about this winery thing, I’m in.” Rich was newly married and living in Chicago with his beautiful wife Michele, and the initial response was “no way Dad.”

However, after considerable thought and glasses of wine, Michele and Rich committed to the crazy plan. They sold their new house, one of their cars, and drove to California to start a new life. It sounds crazy, but no kidding this happened! They arrived in California on July 31, 1995, and immediately dove into country life. No bars. No restaurants. No shopping. There was nothing in Paso Robles. The Chicago city folk experienced a major culture shock.

Each family member selected a job and set about learning their role: Robert and Mary Jane focused on the overall operations.  Michele managed the tasting room and later became the bookkeeper. Rich began learning how to plant, maintain, and harvest the vineyard followed by the heady task of making wine.

After 25 years of steep learning curves, the focus remains on keeping wine accessible, affordable, and fun for everyone.

Cheers to the Hartenberger family for making this dream a reality.