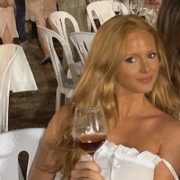 Sparkling blue waters, sun-drenched streets, rustic wines, the pinkest of sunsets, and the creamiest of cheeses are hallmarks of Puglia, the handsome heel of the Italian boot.

A warm breeze greets you the moment you emerge from the Bari airport, immediately inducing a dolce vita mindset. Driving through Polignano a Mare, a coastal town with white and rosé dotted houses perched precariously over the Adriatic sea, you can feel the sun warming your skin and salty wind whipping through your hair. You’re tempted to head straight down to the water with a panino (on fresh-baked focaccia, naturally) and an ice-cold bottle of Verdeca in hand. The region’s people are welcoming and the food is unpretentiously delicious. The land is flat and rustic—brimming with olive groves, vineyards, and masserias—and bordered by a shimmering sea that invites a long, languorous lunch followed by an invigorating swim. It doesn’t take you long to realize that Puglia’s riches won’t be a secret forever.

If there’s a wine that embodies Pugliese summer in a bottle, it’s Verdeca. It’s the perfect embodiment of dolce far niente: the joy of doing nothing. The wine is light, crisp, refreshing, and perfect for battling southern Italy’s scorching summer heat. This rare white grape is present in Emilia-Romagna and Campania, but is thought to have originated in Puglia; it’s abundant in the provinces of Bari and Taranto. Although it’s grown in a hot, Mediterranean climate, it’s still able to retain a fair amount of freshness and acidity. Historically, this grape was frequently used in the production of Vermouth, but today is more often found in blends. Some excellent monovarietal bottlings are also on the rise, such as San Marzano’s Talò Verdeca and Masseria Li Veli’s ‘Askos’ Verdeca.

Another Puglian treasure is Polvanera’s Orange Wine Verdeca. Polvanera is an organic winery with a uniquely excavated limestone cellar, perfect for keeping wines cool during the refinement period. This limestone carries over into the vineyards’ clay soils and imparts a beautiful minerality into the wines. The Adriatic winds add a touch of salt, and the maceration of the grapes on the skins adds a velvety texture and loads of juicy fruit like peaches and oranges to apricots. Like most Verdeca, a bottle of Polvanera calls for il crudo Barese, or the raw fish of Bari, one of the province’s most delectable dishes. The prawns of Gallipoli are also particularly special, and best either savored raw (with an accompanying squeeze of lemon) or served beneath a dollop of local burrata. Verdeca also makes for an excellent aperitivo, especially when enjoyed with taralli, another Puglian specialty. These crunchy, ring-shaped snacks are similar to a cracker or breadstick and are typically made with flour, white wine, salt, and olive oil.

Another native grape of Puglia that has risen to prominence lately is Uva di Troia, also known as Nero di Troia. It’s the third-most-planted red grape in Puglia, and produces one of the most elegant red wines in all of the region, hence its recent surge in popularity. Pure bottlings exist, as do blends. Uva di Troia adds finesse to grapes such as Negroamaro and Primitivo, with its hints of red cherry, red currant, plum, tobacco, licorice, leather, and spice. The wines tend to be medium-bodied with medium-low acidity and high levels of refined tannins, as well as a silky texture—especially when produced at low yields and high altitudes. A glass of Uva di Troia is the perfect complement to a warm bowl of orecchiette con cime di rapa (broccoli rabe) or ragù alla Pugliese, a slow-simmering stew made with various types of meat such as chicken, pork, beef, lamb, and/or veal. Rivera, a winery once called “one of the great estates in Italy” by Antonio Galloni, produces a Nero di Troia called ‘Puer Apuliae’ Castel del Monte Nero di Troia Riserva DOCG that highlights the great potential of the grape. It’s lush and complex with earthy undertones draped with enticing layers of dark fruit and spice.

As you move further south along the boot to Manduria, you encounter Puglia’s flagship wine: Primitivo. Produttori di Manduria is the oldest active wine cooperative in Puglia, tracing back to 1928. This sustainability-focused co-op is made up of 400 small growers who each farm about 1 to 20 hectares of land manually, enabling each grower to give their utmost attention to the vines. They’re known for being masters of Primitivo and after one taste of their Elegia Primitivo di Manduria DOC Riserva, it’s no surprise why. This is a pure Primitivo sourced from alberello and espalier-trained vines up to 50-years-old. Luscious notes of prunes, raspberry jam, and baked cherry pie emerge from the glass along with layers of leather, toasted almond, and clove, thanks to being aged in French oak barriques for a year. You marvel at how well-balanced it is—there are prominent tannins, yet they’re silky-smooth, and the bright acidity is a nice contrast to the notes of dark fruit and the weight on the palate. It’s structured yet elegant and the perfect match for a plate of eggplant parmesan.

Along with Primitivo, Negroamaro is the other grape that helped put Puglian wine on the map. Famous for its rustic, robust reds and rosatos, Negroamaro is well-suited to the terroir of the region because it can withstand heat without dropping acidity. While there are plenty of dark and brooding Negroamaro reds, like Schola Sarmenti’s earthy, animalistic Roccamora, the rosé category has begun to skyrocket in popularity. Across the region, bottles of Tormaresca’s Calafuria are as common a sight as trulli and seaside sunsets. Calafuria’s name means sea swell and evokes waves crashing on the sun-drenched, sandy beaches of Salento. This tasty rosato produced by Tormaresca—part of the Antinori wine family—is a summer delight. Made from 100% Negroamaro, the grapes are grown in clay and limestone soils and are picked by hand, allowing for a careful selection of the best quality. The wine tastes like fresh peaches, watermelon, and strawberry, with lingering notes of rose and cherry blossoms. Salento borders the Adriatic coast, so you also get this energetic acidity and salinity in the wine, making it a perfect match for the catch of the day. It also pairs well with salty foods like panzerotti, deep-fried pockets of dough packed with mozzarella and tomato.

Vito Palumbo, a native Pugliese and long-time Brand Manager at Tormaresca, shared his thoughts on Puglia and the region’s wines:

The extreme warmth and hospitality of the Puglian people is unearthed during a stay at a masseria. A masseria is a fortified farmhouse located on a piece of rural or agricultural land that’s been lovingly restored into a boutique hotel. Masseria Moroseta, situated in the whitewashed village of Ostuni, is a home away from home. An architectural delight, this chic and charming white stone farmhouse is surrounded by trees abundant with olives, apricots, and figs the size of oranges. Their homemade olive oils and jams capture the freshness of the fruit in a bottle or jar. The staff is warm, accommodating, and attentive. Breakfast is served at one of the large, communal tables nestled under leafy pergolas set with beautiful hand-painted ceramics that resemble the works of Matisse and Picasso. While the menu changes on a daily basis, the day typically begins with coffee and fresh-squeezed juice, a few slices of fresh bread painted with rich ribbons of butter , seasonal jams, fresh fruit, as well as a decadent homemade tart crafted that very morning by chef Giorgia Eugenia Goggi. After breakfast, lounge at the pool – and soak in the feeling of time slowly grinding to a halt.

Dinner involves more experimental and creative dishes, meant to be indulged in while conversing with guests from around the world. Local wines such as L’Archetipo Greco Bianco and Cristiano Guttarolo Joha Primitivo/Susamaniello blend are served alongside small plates like tangy, creamy white garlic soup topped with crushed almonds and fresh apricot, or sweet and spicy prawns with chili and pickled rhubarb. Your mouth waters at the sight of thin slivers of beef aged for 39 months, garnished with dragoncello (tarragon), cherries, hazelnuts, and ponzu. As if that all wasn’t enough, finish the meal with honey-marinated peaches atop a homemade galette and fig leaf ice cream—and don’t forget a glass of L’Archetipo Moscatello dessert wine.

The second-largest wine-producing region in Italy, Puglia is Italy’s leading olive oil producer, accounting for nearly half of the country’s production and 12% of the world’s olive oil supply. This ubiquity had to overcome serious challenges, as Puglia suffered from xylella fastidiosa: a deadly bacteria spread by insects that destroyed roughly one-third of the 60 million olive trees in the region. Because the areas hit hardest by the bacterial outbreak were in the south of Puglia, most of the region’s olive oil production is based in the North/Central part of the heel. Terre d’Oria, a small, organic farm in Corato run by the D’Oria family, is one of these Northern Puglian producers. They cultivate the Coratina variety of olive, known for having a high content of polyphenols—compounds with health-promoting benefits such as lowering blood pressure and cholesterol, fighting premature aging, and reducing inflammation in the body. Terre d’Oria is an intense, grassy, and slightly bitter olive oil with an unctuous richness. While not heavily exported, the producer does send a few dozen bottles every year to cousin Daniel Soares in the States. Soares is the owner of Alimentari Flâneur, a gourmet produce market in Manhattan that is a must-stop for any Europhile. If you live in New York City or are visiting around November, pop into the market—you may get lucky enough to snag a bottle. Soares will tell you to pour it over vanilla gelato sprinkled with sea salt and fennel seeds. Listen to him.

The Many Souls of Puglia

With its vibrant wines, rustic cuisine, glistening waters, charming masserias, and sunsets that streak the sky with violet and coral, Puglia is the perfect place to immerse yourself. When visiting the handsome heel of the boot, Vito Palumbo has excellent advice: “Explore! There are many souls in Puglia, and you need time to discover all of them.”

Saperavi: The Next “Cult” Grape