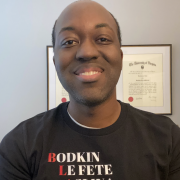 Black History Month may be over, but here at The Vintner Project, we’re committed to raising awareness of Black-owned wine labels year round. Want to do your part in building a more diverse wine industry? Here are five names to keep an eye out for the next time you’re in the wine store.

Theodora Lee grew up on a farm in Ellis County, Texas where she learned to ride a tractor at the age of eight. But it wasn’t until she moved to California in the 1980s that Lee—a senior partner and trial lawyer at a prestigious San Francisco-based law firm—started nurturing a dream to open her own winery. In 2003, her dream came true when she purchased a 20-acre plot of land in the Yorkville Highlands of Mendocino County and transformed it into Theopolis Vineyards.

Theopolis produces exquisite Pinot Noir, Chardonnay, and Muscat (called Cuvee Blanc), but the star variety is undoubtedly Petite Syrah. On warm afternoons at Theopolis Vineyards, cool breezes push up from the Pacific, moderating the temperature in the region. The climate combined with the gravelly soil is perfect for Petite Syrah. The variety can have aggressive tannins and a strong body, but at Theopolis, the extended growing seasons allow the tannins to balance out with the acidity and structure. It’s no wonder Theopolis’s first vintage earned a 94-96 from Robert Parker.

If you can’t find Theopolis at your local wine shop, keep an eye out for the label on the NBC show “Grand Crew.” The wines feature prominently in several episodes!

Despite their different childhoods, both women grew up in places with rich wine cultures. The realization inspired the sisters—both of whom are now based in the San Francisco Bay Area— to launch the McBride Sisters Collection, the largest Black-owned wine producer in the United States.

The collection spans three brands: the original McBride Sisters (and Reserve), Black Girl Magic, and She CAN. Their mission is to “cultivate community, one delicious glass at a time.” Across these three brands, the company has a large portfolio of wines sourced from California’s Central Coast and Marlborough, New Zealand, including Chardonnay, Riesling, Sauvignon Blanc, Pinot Gris, Rose (still and brut), Pinot Noir, Zinfandel, Merlot, and a red blend.

Andre Mack took an unconventional path into winemaking. The founder of Maison Noir Wines left a career in finance to pursue hospitality, starting as a dishwasher at Darden Restaurants in Texas and ascending to head sommelier at New York’s Michelin-starred Per Se restaurant. In 2007, Mack left the restaurant world to start his wine label Mouton Noir, later rebranded as Maison Noir.

With their cheeky names that blend pop culture and viticulture, Maison Noir wines serve as great conversation starters. Try O.P.P. (Other People’s Pinot), an Oregon-based Pinot Noir that gets its name from Naughty by Nature’s hit song “O.P.P.” The wine is earthy, spicy, and floral, with a smooth finish. Another favorite? Oregogne, an aged Chardonnay that nods to the wines of Bourgogne with its fresh acidity and stony finish.

These days, Andre is a bit of a celebrity. Find him reviewing $20 wines and sampling bottles with celebrities like Kevin Hart on Bon Appetit’s YouTube channel.

Longevity Wines is owned and operated by Phil Long, the president of the Association of African-American Vintners. Phil’s story is enough for a post of its own (a story you can read in a recent post on our site!), so we’ll focus on his wine.

Easy-drinking, sophisticated, and great with a wide variety of dishes, Longevity Wines are perfect for every occasion. Try “Debruvee,” a cuvée of Grenache, Syrah, Mouvedre (all grown in the Livermore Valley) that sits in French oak for 30 months. Or the bright and refreshing Pinot Noir rosé, the single-varietal Mouvedre, or the softly tannic Cabernet Sauvignon, which is housed inside a bottle with a 100% recyclable Helix cork.

In keeping with Longevity’s theme of accessibility, the wines can be found all over the country, in big-box stores like Total Wine and Target.

Last but not least is Brown Estate, the first and only Black-owned estate winery in Napa Valley. The vineyard was first planted in 1985 by husband and wife Bassett and Marcella Brown, who turned an 1885 Queen Victorian home into a vineyard, selling grapes to producers like T-Vine Cellars and winemaker Mike Grgich.

When the Browns bought the estate in 1985, they were 20 years into their medical careers. It wasn’t until 2000  that the Brown children—Deneen, David and Coral—took over the vineyard and released their first vintage. Since then, Brown Estate has exploded into one of the region’s most popular estates.

Brown Estate wines show what patience and persistence can bring. All but two of their current estate wines, including their Zinfandel, Tempranillio, Cabernet and Cabernet Franc, are aged for 10-20 months, a labor of love.

Saperavi: The Next “Cult” Grape