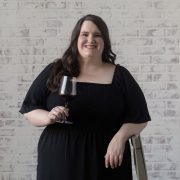 Here Shannon Brock, her husband Paul, and their small team make some of the most compelling wines in the Finger Lakes. Taking in the views from their A-frame winery, it’s easy to see where they find inspiration. Shannon and Paul fell in love with this region and its wine when they made frequent trips from their former home in Washington, DC. They bought the winery in 2011 after a long-stinted career in wine education: Shannon is both a WSET Diploma holder and a former wine professor and Paul has his master’s degree in winemaking at Cornell. Shannon is academic, approachable, and passionately committed to creating sustainable, premium wines—especially incredibly bright Riesling.

MH: Why did you and your husband, Paul, decide to buy a winery?

SB: When we were about twenty-five years old, we came up with the idea to switch careers and join the wine industry. We started saving as much money as possible and moved to the Finger Lakes for Paul to get his degree. I joined the New York Wine and Culinary Center as a wine educator teaching classes for the trade and the public.

We always found the Finger Lakes very compelling because we liked the style of wine being made here. We liked that the story of the region was still being written. I guess you could say that about every wine region, but we felt like the Finger Lakes was still in its early phases of becoming a premium region. We felt that we could contribute here.

Then, as we got to know the industry a lot better, we started to change our minds about having our own winery. We saw how hard it is. It’s a lot of physical work and there are many things out of your control, like the weather and the economic climate. We wondered if it was more than we wanted to take on because it would be our whole life.

After being here for about five years, we came back around to the idea of being owners. Part of that was just the timing. There’s been a lot of changeover as people who started wineries back in the late ‘70s and early ‘80s are ready to retire. In the case of Silver Thread, the owner’s children didn’t want the winery, so he needed to find someone to buy it. We felt a sense of responsibility to step up and be part of the industry’s next wave of leaders.

MH: How would you describe the wines at Silver Thread?

SB: When we bought Silver Thread, its reputation was twofold. One, in all of its history, it was farmed organically, either certified or practicing organic. Two, it was focused on dry Vitis vinifera wines. That doesn’t seem like a big deal today, but when Silver Thread started, there weren’t many Finger Lakes wineries doing that.

It was an easy decision for us to keep the same name to preserve that legacy, but we also wanted to move the winery forward. We feel that the combination of having formal educations in wine and our six years of experience working in the Finger Lakes prior to Silver Thread put us in a position to hit the ground running and improve the wine’s quality and consistency.

For us, in the vineyard, it’s bio-intensive practices to give the wines purity and expression of the soil. In the winery, it’s the right level of intervention. Some people say they’re noninterventionist winemakers, but I think that’s an oxymoron because wine is an intermediate step between fruit and vinegar. You have to intervene or it will only be wine for a fleeting moment. You have to be mindful about your fermentations. That said, we try to be as non-manipulative as possible for the wines to reflect that fruit and vintage.

MH: As a woman in wine, are there other women in the industry who inspire you?

SB: I’ve always seen Jancis Robinson as a role model. I remember reading a story that she was pregnant when she sat for her last MW exam, and I completed my entire WSET Diploma in between having my two children.

As I was finishing up the last part of the diploma, I used to think of Jancis because when I taught wine classes visibly pregnant, people would ask me if I was allowed to do that. I would say, “I’m spitting wine out; I’m a wine professional. I’m mindful of what I’m doing, and it’s not going to hurt my baby.” I always thought of her while I was going through that.

Then locally, my closest female colleague in the wine industry is Lorraine Hems, a professor of wine education at Rochester Institute of Technology. We co-taught a lot of wine classes together. Like Jancis Robinson, she has an open mind about wine and is interested in trying new things. It doesn’t matter if it’s a blue wine or a pineapple wine, she’ll get excited about it and interested.

SB: The Finger Lakes region has a particular combination of climate, weather, and soil that makes it possible to grow interesting grapes.

I would also say the collegiality of the region. I have traveled to other wine regions, and it is clear to me that not every other wine region plays as well in the sandbox as we do in the Finger Lakes.

MH: In your opinion, what does the future look like for Finger Lakes wine?

SB: I’m not the best at making predictions, but based on what I’ve seen happen in the 15 years that I’ve been here, the biggest change is the shift in generations.

When I first got here, there was nobody in my age group that owned a winery. Of course, there were winemakers, but nobody in leadership positions. Over the past 15 years, you’re seeing a changing of the guard. A lot of the pioneers are retiring or stepping back and yielding to the younger people.

Along with that, you’re starting to get new ideas. The region is catching up with the rest of the world. We havethis amazing situation where we get so many tourists that many of the wineries haven’t needed to have a great website, sell wine online, or do a lot with digital marketing because they could sell all the wine out the front door. As the wines have gotten more and more recognition, and we’ve gotten more attention to the region, we’ve had to play catch-up.

SB: We have a strong bias in favor of cool-climate wines. We love Northeast Italy, Chablis, Alsace, and Champagne—mostly white wine. We lean toward wines that pair well with our meals, which tend to be lower-alcohol, higher-acid wines. We also love New Zealand because we did a harvest there.

And we always strive to find small- estate producers. If we’re going to buy Champagne, we like grower Champagne. As small producers ourselves, we have so much respect for that way of making wine.