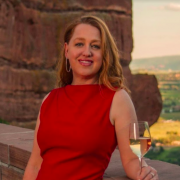 Armenian Wine: Terroir of Past, Present, and Future

The earliest signs of spring are all around. Robins have arrived, perhaps a few weeks early. Colorado winters drag into the spring with our heaviest snows yet to come. Pre-dawn mornings have me searching for another blanket for warmth. Days are growing longer, and people are restless after a long year at home. Americans are looking for jaunts and journeys close to home or new ways to explore the United States by road and by rail.

September and October are often the most beautiful months in Colorado. The searing heat of the summer gives way to warm days and cool nights. Lush wildflowers, prairie grasses, and the Crayola-green Aspen groves transform into glittering gold, red, and orange, seemingly overnight. Summer sweetness becomes pungent sage, and stately pines bask in the high-altitude autumn sun. Grapes, fat with flavor, bask in the late-season glow. Soon, those grapes will become some of the most delicious and often underrated wines in the country.

While the earliest recorded Colorado viticulture dates to 1883, it was in 1890 when the first vineyard plantings of any scale were recorded. Governor George A. Crawford, the founder of the town, Grand Junction, planted 60 acres of grapes in the Grand Valley near Palisade. Crawford planted Zinfandel, Muscat, and “table” grapes like Thompson Seedless. By 1909, the US Department of Commerce reported approximately 1,000 grape-producing farms in Colorado.

Colorado ambitiously passed Prohibition four years before the Volstead Act of 1919 (the 18th Amendment was ratified in 1919 and went into effect in 1920). Prohibition wasn’t intended to target the wine industry per se, but the impact was perhaps most notable as many vineyards across the United States were ripped up and replanted to other crops. In Colorado, the world-famous Palisade peaches we enjoy today were perhaps the prime beneficiary. After the government repealed Prohibition, Colorado’s grape farmers were strongly encouraged to replant their vineyards. As in much of the United States, wine grape growing and winemaking remained relatively dormant until the mid to late 1960s.

The first milestone for Colorado’s modern wine industry came in 1968 when a Denver periodontist named Gerald Ivancie established Ivancie Cellars in Denver. Ivancie hired Warren Winiarski as a winemaking consultant on the project. Winiarski founded Stag’s Leap Cellars in Napa just a few years later and went on to win the 1976 “Judgement of Paris” competition with his 1973 S.L.V. Cabernet Sauvignon. Winiarski cut his teeth as the first winemaker at Robert Mondavi’s fledgling winery.

While Ivancie and Winiarski used Californian grapes, they were instrumental in sowing the seeds, literally and figuratively, for re-establishing vineyards in Colorado’s Grand Valley by convincing growers there to convert farm and orchard land back to vineyards. Ivancie Cellars ultimately failed, but its impact on setting the future course of Colorado wines cannot be underestimated.

The next boon arrived in 1974 when Colorado State University, a premier agricultural college, won a grant from the United States government to plant tiny test vineyards throughout the “four corners” area of southwest Colorado.

This experiment was quickly followed by the passing of The Colorado Limited Winery Act in 1977. Recognizing the opportunities for a thriving wine industry in and around the Grand Valley, the Colorado Department of Agriculture pressed for standards similar to those seen in Napa and Sonoma in Northern California. The Act required the use of 75 percent Colorado grapes to make wine to receive significant tax incentives. While the 75 percent requirement was removed some years later, the establishment of Limited Wineries, and the incentives and benefits associated, has continued to be a foundation of the Colorado wine industry.

By 1978, Jim and Anne Seewald of Colorado Mountain Vineyards (later Colorado Cellars) released their first commercial wines from Colorado grapes. Colorado went from zero vineyards or wineries to the basis for where we are today in a relatively short ten-year span. In 2019, Colorado counted 165 wineries producing still, sparkling, and fortified wines that compete with the best wines in the country.

With more than 300 days of sunshine, incredibly diverse terroir, significant diurnal shifts, and a short but lengthening growing season, Colorado’s continental climate can be an ideal grape-growing region for the right varieties.

Colorado has two AVAs and each is quite different from the other. AVA distinctions are an achievement of proof of geographical and geological uniqueness in terroir.

Colorado’s Grand Valley AVA is known for its silky reds and rustic white wines. It has mineral-rich sandy soils with loam and clay, long and hot days with cool nights thanks to the cooling effects of the winding Colorado River. The West Elks AVA resembles the Spanish Pyrenees Mountains, particularly toward the Bay of Biscay in Basque Country. Both regions are known for their tangy, racy white wines and rosés.

Many winemakers are embracing grape varieties and hybrids that are better suited to their unique terroirs, climates, and stylistic choices, as Colorado gains more and more attention. The winemakers and grape growers considering the land and climate are producing outstanding wines rather than simply choosing to grow and produce cash crop wines from less-than-ideal grape varieties. Time will tell, and if the 2019 vintage is any indication, Colorado wines will continue to shine, increasing in quality and popularity year after year.