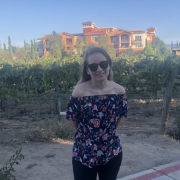 In 2012, after obtaining her graduate degree in viticulture and enology from New Zealand’s Lincoln University, Erin Rasmussen moved to California to work at vineyards in Sonoma and Napa. She racked up experience at top wineries including Ancien Wines, Gallo, and Larkmead. As incredible as her time there was, it impressed on her the difficulties of making wine in the Golden State, where droughts and wildfires pose an existential threat.

It wasn’t until she tasted cool-climate hybrid grapes from the Midwest that she started plotting her exit strategy. She was at a research vineyard in Napa when she came across the varieties, which were developed by the University of Minnesota. She had no doubt they could produce wines that were complex, age-worthy, and that could push the boundaries of winemaking.

“I realized I could make wine the way I wanted to,” she says. What’s more, she could do it back home in the Midwest.

Growing up in Madison, Wisconsin, Ramussen remembers going to farmers’ markets and enjoying the area’s locally-made cheese and produce. At one point, she even tried growing grapes in her backyard with her dad, which, even if they didn’t turn out particularly well, sparked her passion for science and experimentation.

Instead of moving home to Madison, she decided to put down roots in another Wisconsin city: Mineral Point. Located about 50 miles west of the state’s capitol, the small city of just over 2,500 inhabitants is nestled in the “driftless” region of Southern Wisconsin, which is known for its scenic limestone cliffs and bluffs.

Even before purchasing her own facility, Ramussen set her sights on experimenting with grapes that most of us have never heard of—Sabrevois, St. Pepin, LaCrosse, and Marquette, among others—and identified two growers in the state, located in Mount Horeb and Pulaski, along with a few others across the Midwest to source her unique varieties.

Since many Midwestern hybrids are so little known, Rasmussen has the freedom to create her vision from grape to glass, without external biases of what a given variety “should” taste like:

“I taste the grapes and usually have a flash of inspiration as to what style they suit,” she says. “For example, I tasted Brianna and it reminded me of New Zealand Sauvignon Blanc, but I knew I wanted a fatter style. Since the acidity in hybrids is so high, I knew I had to put it through malolactic fermentation.”

For Rasmussen, the creation of a wine is an instinctive art. She loves steering the process and taking ownership of every step along the way—from the transformation of grape to juice, juice to wine, the selection of the label art, and even the naming of the wine. The individuality and thoughtfulness shows, not only in the complex wines she produces, but in their names like Wit & Wisdom, Social Creature, Switch Theory, and Modern Optimism, to name a few.

Her wines represent a range of styles and profiles, from Rivals, a mineral-driven white wine, akin to a Chenin Blanc, to Light Verse, an orange piquette made from rehydrated white grape pomace. In the summer  2021, American Wine Project released its first rosé, Social Creature, which is 90% Saprevois and 10% whole cluster fermented St. Pepin. The result is a juicy, deep-colored, dry rosé, bursting with strawberry, apple, and white flowers.

With only two employees working under her, Rasmussen wears many hats: winemaker, creative director, event planner, marketing director, head of operations, sometimes even delivery driver. And making wine on her own terms isn’t always easy. Since many of the varietals that Rasmussen works with are less than ten years old, it is harder to predict what sort of wine they will make. In addition, she practices a low intervention style of winemaking. She rarely adds sugar, and wants the natural characteristics of the hybrids to speak for themselves.

“This is the hardest winemaking job I’ve ever had,” she says. “The chemistry of the grapes and our humid climate make it very difficult to produce wines that can be taken seriously.”

Despite the difficulties, her hard work continues to pay off: her wines can be found in retailers throughout Madison and Milwaukee, and the winery ships to 37 states. This year, Rasmussen’s goal is to continue expanding her consumer base: “I’m looking forward to sharing the wines with more people—both in Wisconsin and other states,” she says.

In June 2021, American Wine Project opened its tasting room, a modern space that opens to an acre of gardens, with plenty of seating, a water feature, and a pond. The outdoor space is meant to be an oasis where guests can relax in the fresh air while sipping on interesting, reasonably-priced wine.

In a state known for its production of cheese and beer, Rasmussen is carving out a space for cold-climate winemaking while keeping her Midwestern values close. It’s clear she’s onto something.