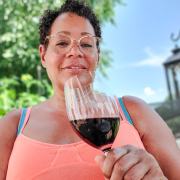 Acontia: A Tale of Spanish Oak

A stone’s throw away off I-77 just down Lytton Farm Road in North Carolina, there is a quiet rural area that is part of Davesté Vineyards. It rests amidst pristine nature atop a hill, just beyond the pond’s flowing waterfall on the property. Though it has existed for more than a decade, it is still seemly a best-kept secret to many.

Winemaker Megan Tipton joined the Davesté team in September of 2020, relocating from the Finger Lakes region of New York, where she pursued an education in Viticulture and Enology. She earned her degree in 2013 from Finger Lakes Community college. During her time in school, Tipton interned at Keuka Spring Vineyards, where she eventually became the assistant winemaker and is now working to make a reputation for North Carolina wines.

Pam Riley: What influenced you to become a winemaker?

Meg Tipton: I did an internship at Keuka Spring Vineyards before it was required for my program. I couldn’t wait to get into the winery. The next year when it came time for me actually to have my internship, I went back. There was a new winemaker, and he said, if you want to come and work our harvest, I promise you will get exposed to every aspect of winemaking. I said, count me in. I worked there at that harvest, and it was a twist of fate that his assistant winemaker at the time left right after harvest, and he hired me.

PR: How did you become the winemaker at Davesté Vineyard?

MT: I talked to Davesté about three years ago, and at the time, they didn’t need a winemaker. They were in good hands with the winemaker they had, and so that was that. But they kept my resume, and this year, my phone rang back in August, and the owner, Dave Defeher, asked me if I would like to come in and talk with him about taking a winemaking position. I thought, this is just fate because it’s 20 minutes from my home, and it’s the only winery I felt would work with my life, because here again, I thought I was going to have to drive an hour or more.

PR: What are some of the significant differences you have noticed between Finger Lakes and North Carolina as a winemaker?

MT: First of all, the climate. The climates are completely different, and it brings both opportunities and challenges from a winemaking perspective. New York is truly cool-climate winemaking; the focus there is on aromatic whites and rosés. Here we deal with hotter days and a longer growing season. It brings about a different style of wine, and the chemistry of wine can be a little bit different. I am used to dealing with low-pH wines, and here in North Carolina, the chemistry lends itself to higher pHs.

Here in North Carolina, we do a better job with reds; just because we do have that longer growing season and warmer days, whereas in New York, finding and developing structure in reds can be a bit of a challenge.

PR: What is your winemaking style?

MT: I have a cold climate style. We concentrate on vinifera wines here at the winery, and this year, there will be a lot of aromatic white wines, which are right in my wheelhouse, and speak to my strengths.

I would characterize it as “informed creativity.” I like numbers. I like the story they unfold about the chemistry behind why a wine is developing the way it is. At some point, however, I try to listen to my intuition. I use the numbers as a guide; then I let the wine tell me what it wants to be and make decisions accordingly.

PR: What do you most want people to know about the North Carolina wine region.

MT: There are sort of two arms to the winemaking industry North Carolina wine industry. One is the native Muscadine and Scuppernong grapes. They have a very rich tradition here. There are beautiful wines made from those native species that are important to this industry. The other arm is the vinifera being grown.

PR: There has been a lot of focus on inequities in the wine world, one of those explicitly focusing on woman winemakers in a mostly male-dominated industry? Share your experiences in the industry and what has been your biggest challenge.

MT: Is there still work to do? Absolutely, but when you take a historical view, the shift of female winemakers’ concentration is notable. In many parts of the world during the 19th and 20th centuries, the only way a woman could lead a winery was through a spouse’s death. Fast forward to today, more women are leading winemaking staffs than ever before. In some places in the world, such as the Rias Baixas area of Spain, females are head winemakers at 50 percent of wineries.

What does this mean for us here in the US? Progress on this issue is happening, but there’s still a long way to go. In California, for example, only 10 percent of wineries have female winemakers. This figure is a little stunning and shows that the road for women to succeed in winemaking is yet a long one.

Still, there is an uptick in the number of women in viticulture and enology programs, exemplifying a definite shift. Even when I went to school nearly ten years ago, almost half of my class was comprised of women. Since then, some of these women have left the industry, but not at a higher percentage than their male counterparts. In short, change is happening, but it’s slow, so sometimes it’s hard to see.

However, when I say I feel hopeful for women in the wine industry, I’m not ignoring some of the recent events that have taken place in highly-esteemed wine organizations, which brought to light inexcusable gender bias and harassment. This, too, is a sign of a change in the times. Whether in the wine industry or any other, women are speaking out when they know a situation is unfair or egregious, and change is happening. On a larger scale, organizations such as Wonder Women of Wine, Wine Women, and Women of the Vine & Spirits are critical voices for advancing women in our industry.

PR: What advice can you offer to women looking to make a career in wine?

MT: Women shouldn’t make assumptions of other people’s perceptions, either your gender or your abilities, or your thought processes. Just forge ahead. That is advice I have followed in other aspects of my life. If you want it bad enough, you will figure out how to make it work.

PR: What upcoming projects are you most excited about?

MT: The first-ever Davesté Vineyard rosé. We grow Chambourcin in the vineyard, and there was a pretty low yield crop this year because of frost damage, so we decided to make a dry rosé. Not long after I joined the winery, we harvested the Chambourcin, and rosé is really in my wheelhouse, so I am very excited to be introducing this wine.

PR: What’s in your cellar?

MT: I tend to be a white wine drinker, but I have a lot of big California reds in my cellar that I collect; I rarely drink them. What’s in my cellar at home is aromatic whites and rosés. The other thing I have in my cellar is lots of white wine from a very small region in Loire Valley; it’s called Savennières produced from Chenin Blanc. Currently, in my refrigerator, you’ll find dry rosé and an unoaked Chardonnay.