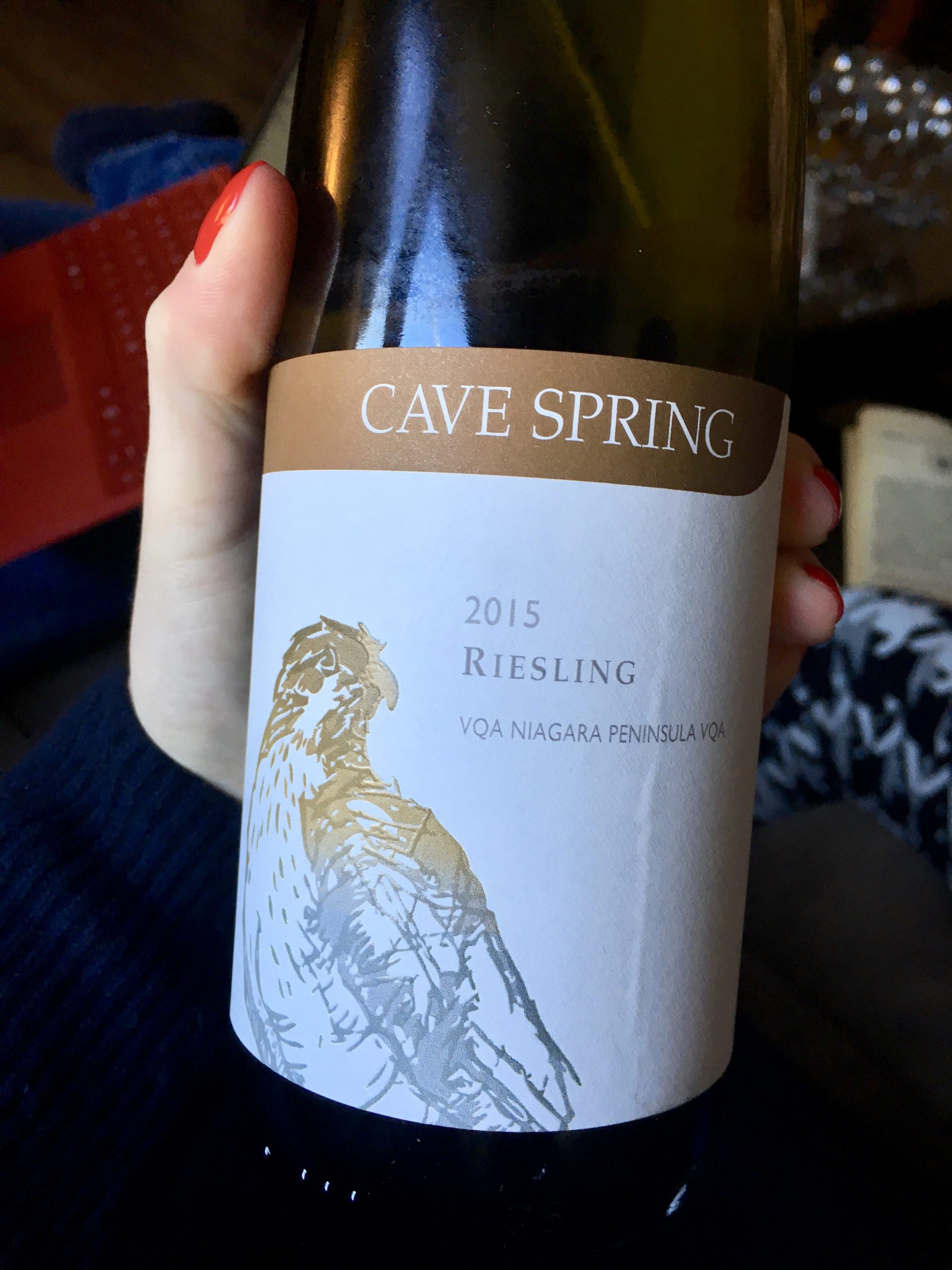 This week’s wine of choice is the 2015 Riesling from Cave Spring Vineyards in the Niagara Peninsula, Canada.

A couple of weeks ago, I went on a brief trip home to Canada for the Easter long weekend. And, of course, it was a weekend full of wine. In addition to several stunning Burgundies, Beaujolais, and Château-Neuf- du-Pape’s that I was lucky enough to sample from the family cellar, I also played around with a little bit of Canadian wine (and no, it’s not all ice wine).

The production of dry table wines for sale and export is a relatively new industry in my native country, dating only from about 1988, when three key events happened simultaneously to allow winemaking to develop as a serious endeavour. The first of these was the free-trade agreement with the United States, the second, the establishment of the Vintners’ Quality Alliance (VQA), and the third, a major vine replacement programme substituting the European Vitis vinifera in favour of more commonly planted native varieties.

Cave Spring Vineyards was born out of just this combination of factors. Established in 1986, its founders, the Penachetti family, played a key part in also establishing and leading the early VQA. Like many Canadian families, their story is one of migration and a developing passion for their new-found land. Giuseppe Pennachetti emigrated from his hometown in Fermo, Italy, to work as a mason, helping to build Niagara’s Welland Canal in the early 1920s. In his retirement, Giuseppe started a hobby vineyard, which he managed with his sons, John Sr. and Leonard. Over the years, John and Len began to professionalize the winery, eventually swapping native Canadian grape varieties for ‘time- honoured European varietals’, and partnering with expert vintners to bring out the best in these grapes.

“I saw a chance for getting back to the land and creating a place where our family could do something special,” says Len. “Vineyards exist from generation to generation. The way they grow and evolve reflects all the energy and commitment you put into them. What better family business could there be?”

Today the winery is a true family run enterprise, with several more brothers and their wives playing a part in the winery, including one family member, Anne, who brings her own family experience of running the renowned Urbans-Hof winery in Germany’s Mosel Valley. With this sort of savoir-faire on the team, and as one of the earliest planters of European varietals in Canada, you can be sure that Cave Spring Riesling is top-notch.

Medium dry, and high in acid, this Riesling does not disappoint on the palate; it has well-developed flavours of green apple, apricot, lemon, and honey. This is combined with a classic citrus fruit and petrol nose, which is simply delightful. We had this as a refreshing aperitif (before eating a mountain of takeout from Ottawa’s famed Colonnade Pizza), but it would pair well with the classic suggestion — shellfish — or more inventive items such as the vintners’ suggestion — barbecue pork and roasted game.

The first of many, I look forward to bringing you several more wine reviews and interviews with Canadian vintners this summer, after a trip to one of Canada’s largest wine-growing regions: the Okanagan Valley. To get a sneak peek of who I’ll be meeting, check out:

What to Know About Pox, the Ceremonial Liquor from Chiapas