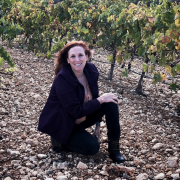 Girls used to grow up with dreams of being a princess or ballerina. A 2015 article in Fatherly Magazine shows that the stats have changed. The top career choices for girls are doctor, teacher, scientist, and chef. Thankfully, for the wine world, Samra Morris never read that article.

Samra Morris grew up in Bosnia, part of former Yugoslavia. Her childhood was not one that many Americans can relate to. She literally was forced to dodge bullets.

Located on the Balkan Peninsula in south-eastern Europe, Bosnia and Herzegovina declared their independence in 1992. But the separation came at a cost, and the country remained at war until 1995.

One day, in Sarajevo, men in black masks came and knocked on Samra’s door claiming they were practicing military procedures. Unfortunately, the practice turned real and gunfire broke out. Samra, along with her family, were able to escape across the river to safety. At six years old, she didn’t know what was going on while bombs were going off around her. Instead of math and science lectures, her lessons included how to survive daily sniper shots.

“You’re just a kid who wants to play and then suddenly someone wants to come and kill you,” she explains. “ I remember the first few days I was just crying, because we had to go into shelter. My parents prepared me on what to say if I was captured and how to escape. I don’t think a lot of people understand war and how horrible it is.”

After the religious war was declared to have ended, there was one more massive push toward extinction of the Muslims in which more than 8000 people were killed over three days. It was during this time that Samra lost many family members. Ultimately, peace did prevail; and, somehow, Samra managed to begin a “normal” life.

I was able to catch up with Samra via of Zoom to discuss her childhood in Bosnia, how she found her way to the United States, and what it is like to be the first Bosnian-American female to be named head winemaker in California.

Lori Budd: What do you like to share about your country to those who only think of it as a place of recent war?

Samra Morris: There is so much to explore and so much to do. It is an interesting and unique place with so much to offer.

I like to talk about the beauty of my country. The nature, the people, the food, and the wine. We have a lot of forests, rivers, and wild horses, and are the only European country with old rainforest.

LB: What is your favorite thing about Sarajevo?

SM: One of my favorite things is how cultural Sarajevo is. It is known as the “Jerusalem of Europe” because of all the different formal religions. In one block you can have an orthodox church, next to a catholic church, next to a mosque, next to a synagogue. Downtown, you get the feel of Istanbul, because of the Ottoman empire that ruled 500 years, but one block away you feel as if you are in Vienna, because the Hungarian Empire came in after the Ottomans. Sarajevo is so different, because it has so many different historical influences.

LB: Did you always know you wanted to be a winemaker?

SM: No. During my Bachelor studies, I thought I wanted to be a brewmaster, so I interned at an old brewery in Sarajevo, but couldn’t stand the smell of beer. During my Masters, I was introduced to wine and loved the chemistry involved and especially the aging process and decided that I wanted to become a winemaker.

LB: When did you come to the United States and how did you get your first job in wine?

SM: I met my husband during my studies. He is in the air force military and was based in Sarajevo. Once I finished my studies, we decided to get married, but I knew I wanted to be a winemaker and was worried about where we would be going. Luckily, he was stationed in Vacaville, just outside of Napa, so I moved to the United States in 2012.

LB: What was your first job in the California wine industry? How did you find your way to Alma Rosa?

SM: A friend gave me advice to start in a tasting room just to get to know the area. Debra Eagle, who is currently the General Manager at Alma Rosa, but was with Hestan Vineyards at that time, gave me my first job in the United States. Through the tasting room, I met winemaker Thomas Rivers Brown. I worked three harvests under him, but Debra always followed my career. In 2019, Debra offered me the job of assistant winemaker for Alma Rosa and I moved to Santa Barbara. However, the head winemaker decided to quit the week before harvest. I knew I could do it, and Debra and owner Bob, gave me the opportunity.

LB: Tell us about Alma Rosa Winery. How can people taste your wines?

SM: We have a tasting room in Solvang, but the winery is in the beautiful Santa Rita Hills. We have an estate of over 600 acres of which thirty acres are planted. Customers have the opportunity to do private tastings in an old dairy house. Plus, we have five noncontiguous vineyards of which you can schedule a guided hiking experience that ends with a tasting.

LB: You are the first Bosnian-American female winemaker. Is that a big burden to carry? What does it feel like to be a trailblazer?

SM: When I was doing my internship and early on, I never thought of it as being a trailblazer, I just knew being a winemaker is what I wanted to do. But now it is exciting because I can show people the beauty of my country and hope to inspire them to go visit my country. I feel very honored to have that opportunity to promote my country.