Why You Should Celebrate World Malbec Day This Year

“Vineyards are humble, rustic places that bring us back to our connection to Mother Earth.”

Growing up in Doylestown, Pennsylvania, farms were everywhere and agriculture,at that time, was a way of life for Patrick Durbin. His grandparents, who had emigrated from Slovenia, would showcase these natural vegetable and herb gardens in the summer—way before everything was organic. Being surrounded by sustainable food, would ultimately lead to a connection to the land surrounding Patrick.

Along with fresh produce on the dinner table, wine was also an integral part of the meal. “My grandfather was a practical home winemaker- skills he brought from the old country. I remember as a very young child the crisp aromas of damp oak upon entering his wine cellar,” said Patrick, “Wine was always at the dinner table at our house. It was like salt, a flavor enhancer for meals. It wasn’t a pretentious thing, just a practical libation at the end of a hard day.”

Patrick would go on to study biology and philosophy in college, which would ultimately lead him down a corporate career path based out of the Boston metropolitan area. Patrick would run complex global healthcare and technology companies that have provided him with both a grounding in process as well as leadership.  In fact thirty years would go by, until he found himself in Napa on his wedding anniversary with his wife, Becky. Standing in the middle of a vineyard, glasses of Cabernet Sauvignon in hand, Becky suggested they get into the wine business. The couple debated at length whether or not owning a winery would make sense. As luck would have it, they met a few people that night who were looking for others to share winemaking space. The rest is history as Sea Bird Wines would be born.

Sea Bird’s first vintage was in 2011, but they did not formally enter the market until this year. “I enrolled in the enology program at UC Davis. I finished my post-baccalaureate certificate there in two years while working through three vintages with our consulting winemaker, Patrick Saboe,” said Patrick.  Saboe has held enologist and winemaker positions at Hanna Winery, Keller Estate and the Wine Foundry to name a few.

The winery’s primary focus remains on giving back to philanthropic groups.  “When Becky and I decided to start our winery, we agreed that it should be driven from passion and not just for profit. She and I decided once production and performance started yielding a profit, we we gift 100% to organizations that were working to protect coastlines of the US and marine life that inhabit them. Sea birds were an obvious place to start given the are our namesake,” said Patrick.  The winery also continues to explore co-marketing opportunities with non-profits as they would like to further contribute to improve the health of coastlines and marine wildlife.

The marine conservation comes from the summers Patrick spent on the New Jersey shores as a child. Idyllic memories of birds, shellfish and other wildlife were replaced by syringes and bottles washing up on the shoreline. “I remember a seagull with a six pack soft plastic ring wedged on its neck, struggling. Suddenly, the beach wasn’t a playground. It was a waste dump,” said Patrick. The love for the ocean led to the name and told the couple how their profits should be utilized. 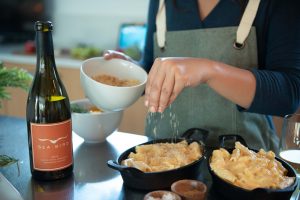 Early on, Patrick and Becky knew they wanted to make a Cabernet Sauvignon and Pinot Noir (they would later add a Chardonnay).  They wanted to produce Cabernet Sauvignons  that had both the rich fruit flavors of the Napa Valley floor while maintaining the mountain side tannins of Napa. This led them to sourcing grapes from Atlas Peak and the Napa ‘bench’ on the eastern side of the valley. “We’ve had great luck  with this location and have worked with two fabulous vineyards here, Broken Rock and Stagecoach,” said Patrick.  For the Pinot Noir and Chardonnay, they have used a variety of grapes from the Sonoma Coast all the way down to the Santa Rita Hills near Santa Barbara.

The winery continues to expand and is hoping to triple its sales over the next year.  The full scale push out of their wine club, called “The Flock”, will be launched this year.  “We are going to expand our Flock events, hosting more tastings on the east and west coasts. We are also selectively expanding offering Sea Bird at high end restaurants, private clubs and public tasting rooms around the US,” said Patrick. In a crowded market, Sea Bird is grouped in the luxury category whereby demand and differentiation for their wines is high.

“I think the expansion of non-traditional varietals as stand-alone (Cab Franc for example) is getting people interested and providing another product for wineries. You can’t ignore Meritage (non-varietal) product growth as well,” said Patrick.

There are two primary elements to Patrick’s winemaking style- let the grapes and the terroir do the work while concurrently aiming for structure. “I try to make wines that, when someone tastes them, they appreciate the finesse, the nuances, and subtleties, not like a KABOOM like you’ve been launched in a rocket,” noted Patrick.

Looking to the future, Patrick and Becky have also fallen in love with Zinfandel as well. “I wouldn’t be surprised if we do some Zin in the future,” said Patrick, but in the meantime Sea Bird Wines will continue to grow their business organically while further giving back to nonprofits. On a personal level, the vineyards offer Patrick a place of solitude and comfort. “Vineyards are humble, rustic places that bring us back to our connection to Mother Earth. You can be very much alone yet feel connected to centuries of others who have known the arts of grape growing and winemaking,” concluded Patrick.

Lovely garnet color with a lot of black cherry and a hint of cranberry fruit flavors coming at you rounded out with a touch of cedar and subtle almost nuanced pepper on the end as well as a silky smooth tannin structure.

Sourced from a single vineyard at the base of Atlas Peak on the eastern ridge of Napa Valley this wine would pair off nicely with a beef burrito.

Beautifully structured with blueberry, blackberry, black currant with a hint of “Rutherford Dust” hitting you from front-to-back. At 14.5%, this wine slightly aged, stands firmly by itself. You could serve this up with a lighter meal or open it to start a party.

Sourced from the G3 Vineyard in Napa Valley, this wine is the iconic expression of what a Napa Valley Cabernet Sauvignon should be – drink it now or hold it back for a few more years.

Glistening pale gold with a lot of lemon and a touch of apple and pear.  Sourced from the Sangiacomo Vineyard in the Sonoma Coast ,this wine is expressive without being overpowering at 14.1% ABV with the right balance of acidity and fruit. Open this bottle as soon as possible and pair it with a nice healthy chicken salad.