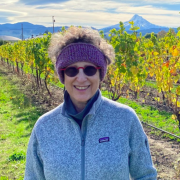 A winery visit typically begins on an unpaved country road lined by vineyards. After bumping along for a quarter mile or so, the visitor arrives at a stone, brick, or sometimes wood building labeled “winery” and it feels as if this scenic yet isolated spot is indeed in the middle of nowhere.

But Latta Wines is a chic urban winery located in SoDo (South of Downtown), a neighborhood in Seattle’s industrial district. Cars squeeze into a small parking lot surrounded on three sides by warehouses where several wineries and other businesses have set up shop. Forklifts scramble about, loading and unloading boxes, and jets from nearby Sea-Tac airport scream overhead. In a corner of this block sits Latta, its covered patio furnished with propane heaters and socially distanced tables.

Latta Wines was founded in 2011 by winemaker and owner Andrew Latta. He was first introduced to wine while coming up in the restaurant scene in his home state of Kentucky, where he made his way from busser to sommelier. It was during this time as a sommelier that Andrew was introduced to the wines of Washington state. Prior to moving to Washington, he was the wine director for a resort in Thailand. When he decided to leave Thailand 15 years ago and move to Walla Walla, WA sight unseen, he jumped into wine production. Now he crafts highly acclaimed wines from Rhône varieties and others, grown in the unique soils of eastern Washington.

From Seattle looking east, the north-to-south-running Cascades loom large and deep green—the highest peaks snow-capped even in summer. But venture over the mountains and a dry, brown landscape awaits.

East-moving storms off the Pacific dissipate before they reach the east side of Washington. In this “rain shadow” of the Cascades, the climate is sunny and dry, with a scant six to eight inches of rain on average. A desert, actually. Large glacial river systems and underground aquifers replenished by mountain snowmelt provide ample irrigation water to Washington’s farmers. Grapes bask in up to 300 days of sunshine per year—more summer sun than San Diego, Phoenix, or Honolulu typically get. Just as important, there’s a huge difference between day and night temperatures during the growing season. This diurnal shift locks in the bright acidity that distinguishes Washington state wines.

From a geological perspective, eastern Washington is a wine geek’s paradise. Lava bubbling up from ancient fissures or spewed by explosive volcanoes, some of them still active, have layered the ground in rich basalt over time. When glacial Lake Missoula broke through an ice dam about 15,000 years ago, floods washed over eastern Washington and left behind well-draining alluvial soil topped, on higher elevations, by a super-fine, windblown material called loess. Meanwhile, the movement of tectonic plates continues to push the hills into ridges and valleys that offer a variety of slopes and aspects (the direction a slope faces) to a range of diverse grape varieties.

Historically and to this day, huge Washington vineyards have supplied grapes to small wineries located near Seattle markets. In this arrangement, winery owners partner with vineyard managers and may have a say in how grapes are handled. Some vineyards hold contracts with up to 30 different wineries. Vineyard names often appear on wine labels, a testament to the independence and significance these sites have in the Washington wine industry.

Things are changing, however. More of the state’s larger wineries are building close to vineyards, and some big California wineries are moving into Washington to lower their operating costs. The Walla Walla wine region, which was voted America’s Best Wine Region in the 2020 USA TODAY 10 Best Readers’ Choice Awards, boasts a total of 120 wineries. Some of them produce wines from their own grapes.

Though Andrew Latta is based in Seattle, he’s “hyper-involved on the growing side” of the industry. He travels to eastern Washington regularly and looks for sites that allow the planted varieties to express their terroir (sense of place). “Matching variety to site is paramount,” he states.

Latta describes his winemaking style as a combination of sourcing grapes well-suited to their terrain and a low-intervention approach that allows the selected sites to speak for themselves.

To Latta, eastern Washington’s “analog,” or comparison wine region, is the Rhône Valley of southern France. This iconic region is best known for producing powerful and elegant Syrah wines from the steep, south-facing slopes of the northern Rhône. In the warmer and flatter southern Rhône, Grenache takes the lead, supported by a well-heeled cast of grapes that includes deep-red Mourvèdre and full-bodied whites like Roussanne.

Latta crafts small-lot, single-vineyard wines from each of these four grapes and a Grenache-Syrah-Mourvèdre (GSM) signature blend to rival those of the Rhône. His intense, terroir-driven wines garner high marks from reviewers and notable wine publications. Detailed descriptions of his vineyard partners can be found on the Latta website. Following is a sampling of six Latta wines to try:

Lawrence Vineyard is located in the Columbia Valley AVA (American Viticultural Area), almost halfway between Seattle and Spokane. A cool site overlooking the Royal Slope and the Saddle Mountains, the Roussanne block sits at 1,450 feet in silt loam soil and broken basalt. “We sprawled the west side of the vine rows to keep sunburn out and freshness in,” the website states. The sloped elevation of this vineyard protects it from frost that wreaks havoc in vineyard sites lower on the slope.

Upland Vineyard is a rolling, extremely sloped site located in the Snipes Mountain AVA, a subregion of the Yakima Valley AVA. This warm, rocky site was one of the first planted to vitis vinifera (European grapes) in Washington. Snipes Mountain is a seven-mile-long ridge created by fault activity. Its 1,290-foot “peak” rises from the floor of the Yakima Valley. Below this area, soils are composed of gravel and sediments deposited by ancient riverbeds and ranging in size “from a fist to a football.”

Latta sources Grenache and Mourvèdre from Upland Vineyard, while Freewater Rocks Vineyard in the Rocks District of the Walla Walla AVA is his source for both Grenache and Syrah. The soil in Freewater Rocks is cobbly loam. Dana Dibble, the vineyard manager, is a third-generation farmer who “transformed these hardscrabble orchards into the manicured rows of vines standing among the stones today.” Latta and Dibble have collaborated on many vintages and vineyard projects over the years.

Weinbau Vineyard is a warm site located in the Wahluke Slope AVA, a subregion of the Columbia Valley AVA. The Rattlesnake Mountains rise to the south and the Saddle Mountains to the north. The land slopes gently south, with elevation ranging from 710 to 950 feet. Soil is dominated by silt loam.